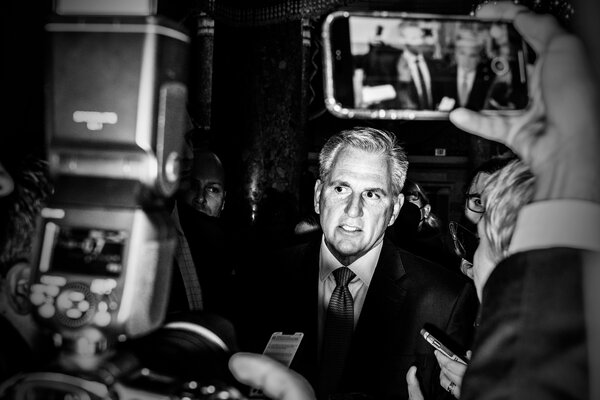 As we approach the anniversary of the Jan. 6 attack, it’s been grimly amusing to see that the party of insurrection can’t even manage the orderly transfer of power to itself. Rarely does karma play out so neatly.

Kevin McCarthy nurtured the spirit of reactionary nihilism in the Republican Party, first by trying to harness the energy of the Tea Party for his own ambition, and then by his near-total capitulation to Donald Trump. Now the chaotic forces he abetted have, at least for the moment, derailed his goal of becoming House speaker, subjecting him to multiple public humiliations at what was supposed to be his moment of triumph.

It is still possible that McCarthy will manage to eke this thing out by making even more concessions to the growing bloc of Republicans who oppose him. It is not possible, however, that he’ll emerge, in any real sense, as a leader.

Unable to corral his caucus for what is usually an easy vote, there is no chance McCarthy would be able to get them on board for hard ones, like keeping the government open or raising the debt ceiling to avoid plunging the country into default. His best-case scenario is that he’d be a fragile figurehead, a hostage to the hard right and constantly in danger of defenestration. And even that scenario looks increasingly out of reach.

McCarthy’s approach to the far right has always been one of indulgence. Despite his own apparent lack of ideological conviction, he recruited many of the Tea Party candidates elected to the House in 2010. As Robert Draper, the longtime chronicler of the Republican Party, wrote in 2011, they represented “McCarthy’s more entrepreneurial approach to politics: seize upon a trend (in this case, government phobia), put all your money on it and then work hard to make the trend last.” McCarthy persisted in this approach as the Tea Party evolved into Trumpism, earning Trump’s patronizing sobriquet: “My Kevin.”

Marginalizing Trump after Jan. 6 would have been politically risky for McCarthy, no doubt. But by flying to Mar-a-Lago to abase himself before Trump just weeks after the attack on the Capitol — signaling to all that Trump remained the leader of the Republican Party — McCarthy helped seal his own fate. Trump is a major reason the Republican House margin is as small as it is; voters rejected many of Trump’s handpicked candidates, as well as the party’s broader election denialism. And though Trump himself has endorsed McCarthy, many of his disciples are hostile to anyone associated with the Republican establishment.

As The Times reported, of the 20 lawmakers who, as of this writing, have voted against McCarthy, 17 were endorsed by Trump in 2022. Five of them are freshmen — these are people who are part of Trump’s remaking of the Republican Party. Arizona’s Eli Crane, for example, is a former contestant on the business reality show “Shark Tank,” where he pitched bottle openers made of dummy .50-caliber bullets. (“Shoot open some bottles in the manliest way possible,” says an ad for the product.) Florida’s Anna Paulina Luna, an ally of the Trump die-hard Matt Gaetz, is a veteran and former swimsuit model who built a career as a conservative rabble-rouser, most recently running Hispanic outreach for the right-wing outfit Turning Point USA. These people seem to be crafting brands as much as political careers, meaning they benefit from high drama and have little need to work their way through Republican institutions.

The movement these characters are part of — one McCarthy hoped would carry him to power — isn’t simply ideological. It’s also a set of defiant, paranoid, anti-system attitudes, and a version of politics that prioritizes showboating over legislating. That’s why McCarthy has found himself unable to negotiate with the holdouts. There are no real policy stakes, no concessions he can make on issues. The anti-McCarthy faction’s demands are largely about power and visibility, and whenever he meets those demands, they move the goal posts.

McCarthy evidently believed that by courting Georgia’s Marjorie Taylor Greene, an avatar of hyper-performative politics, he could co-opt her wing of the party. He was set to offer her valuable committee assignments, and, according to Draper, had even offered to create a new leadership position for her. But her elevation would be valuable to other Trumpists only if there were concrete things they hoped to accomplish together. Putting Greene on the Oversight Committee does nothing to help those who aspire to her notoriety. They don’t want policy; they want airtime.

One of the most amazing aspects of the House Republican crackup has been watching Greene’s angry exasperation as her shot at real power is imperiled by attention-seeking hard-liners. “They’re proving to the country that they’re just destructionists,” she said on Sunday. It was the embodiment of the Twitter meme: “‘I never thought leopards would eat MY face,’ sobs woman who voted for the Leopards Eating People’s Faces Party.”

By bowing first to Trump and then to Greene, all McCarthy has done is show other Republicans how much there is to gain from pushing him around. His downfall isn’t surprising: Almost no one who has sold his or her soul to Trump has come out ahead. (The jury is still out on the Republican conference chair Elise Stefanik.) The reason these deals with the devil always go bad, I suspect, isn’t metaphysical. It’s simply that Trump sycophants are ultimately undermined by their weak and flabby character.

McCarthy’s Republican opponents are right in surmising that he believes in nothing and will yield under pressure; the evidence is his inability to stand up to them. His mistake was convincing himself that a party obsessed with dominance would reward submission.

Opinion | New Yorkers Have a Chance to Remake How They Vote

Opinion | Harvard Betrays a Law Professor — and Itself