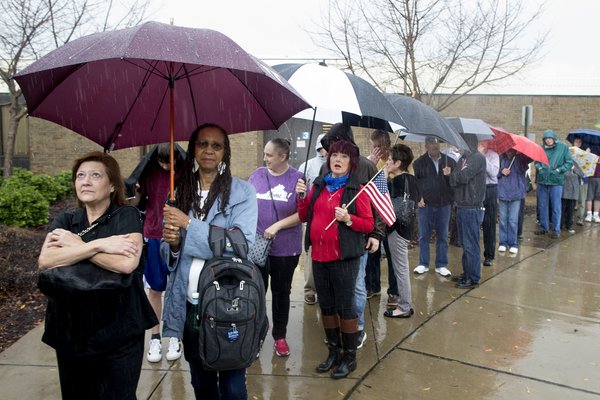 The United States finally has the pro-democracy movement that it needs.

Last week, ballot initiatives to improve the functioning of democracy fared very well. In Florida — a state divided nearly equally between right and left — more than 64 percent of voters approved restoring the franchise to 1.4 million people with felony convictions. In Colorado, Michigan and Missouri, measures to reduce gerrymandering passed. In Maryland, Michigan and Nevada, measures to simplify voter registration passed. “In red states as well as blue states,” Chiraag Bains of the think tank Demos says, “voters overwhelmingly sent the message: We’re taking our democracy back.”

Of course, there is still an enormous amount of work to do. Voting remains more difficult here than in almost any other affluent country. On Election Day, I had to wait in line for 45 minutes, even though I have a job that gives me the luxury of voting in the middle of the day.

And this country also suffers, unfortunately, from an anti-democracy movement: Leaders of the Republican Party — out of a fear of the popular will — keep trying to make voting harder. They have closed polling places, reduced voting hours and introduced bureaucratic hurdles.

[Listen to “The Argument” podcast every Thursday morning with Ross Douthat, Michelle Goldberg and David Leonhardt.]

Amid last week’s mostly good news, Arkansas and North Carolina passed new voter-identification measures that are clearly intended to hold down African-American turnout. Most outrageously, top Republicans, including President Trump and Senator Marco Rubio, are arguing that Florida should not carefully count all of the votes from this year’s election.

Over all, though, the election was an excellent one for American democracy. The battle has now been fully joined: Progressive activists have come to understand the importance of promoting and protecting democracy. Most citizens — across the political left, center and right — agree.

Before the midterms, the leaders of Indivisible, the big progressive grass-roots group, conducted a national survey of its members — people who had marched, knocked on doors or otherwise gotten politically involved over the past two years. The survey included a list of issues, and asked which should be the Democrats’ top priorities after the midterms. It included health care, gun safety, the environment, civil rights, reproductive rights, taxes, the courts, education and criminal justice reform. And there was a landslide winner. But it wasn’t any of those issues, important as they are.

The winning issue was democracy.

Some 69 percent of respondents named it in their top three priorities. Health care finished a distant second, at 48 percent. Then came the environment (43 percent), judicial nominations (32 percent) and civil rights (29 percent).

“It comes from this general concern about democratic institutions not being reflective of the will of the people,” Ezra Levin, a co-founder of Indivisible, told me. Leah Greenberg, also a co-founder, says, “We have to unrig the rules.” Best of all, the success of the recent ballot initiatives shows that these attitudes exist among many centrists and conservatives, too.

True, some pro-democracy changes are not realistic anytime soon. Trump and this Senate won’t enact a new federal Voting Rights Act, nor will they grant the full rights of citizenship to the residents of Washington, D.C., and Puerto Rico. But many other changes are feasible.

At the state level, a wave of new governors and legislators will soon take office, and they can accomplish a lot. States that don’t have automatic voter registration should adopt it. (Hey, Governor Andrew Cuomo: Isn’t New York supposed to be a progressive leader?) States that have not yet created nonpartisan offices to draw congressional districts should follow the examples of Colorado, Michigan and Missouri.

If governors and legislators won’t act, citizen activists should, using ballot initiatives. Most of these measures will pass, in both blue states and red. Arizona, Florida and Ohio, among others, could hold initiatives to establish automatic registration, Stephen Wolf of Daily Kos has noted. Still other states could follow Florida’s lead and re-enfranchise people with felony convictions.

This is also a moment to think ambitiously about a pro-democracy agenda. Any Democrat considering a 2020 run for president should be working on a democracy plan, much as any Democrat running in 2008 had a health care plan.

My own wish list includes universal voting by mail, which some parts of the West already use — and which lifts turnout much more than automatic voter registration alone. I would also like to see more places lower the voting age to 16 for local elections, as a few Maryland cities have. If you’re old enough to operate a lethal two-ton vehicle, you’re old enough to have a say in your community’s future.

More democratic participation won’t solve all of the country’s problems. But it will solve some of them. The United States has low voter turnout for a reason: Our system — with workday elections, long voting lines and cumbersome registration rules — is designed to discourage mass participation. That same system once barred women, African-Americans and 18-year-olds, among others, from voting.

The system has changed before, and it can change again. It is already starting to.

David Leonhardt is a former Washington bureau chief for the Times, and was the founding editor of The Upshot and head of The 2020 Project, on the future of the Times newsroom. He won the 2011 Pulitzer Prize for commentary, for columns on the financial crisis. @DLeonhardt • Facebook

Roslyn Dee: 'Memories made for grown-ups'

Opinion | Is There Freedom of Speech in Germany?