Just over a year ago, on Aug. 9, 2020, I stood in Belarus’s presidential election against Aleksandr Lukashenko. The dictator, who has ruled the country for 27 years with an iron fist, stole victory from us, setting off widespread protests. We united in a national pro-democracy movement to demand the release of all political prisoners, an end to state violence and a free and fair election.

The regime responded with violence. Since then, more than 35,000 people have been detained, nearly 5,000 of whom claim they were tortured. The authorities have started 4,691 politically motivated criminal cases, and according to Viasna, an independent human rights center, there are now over 600 political prisoners. Ten people have lost their lives.

The past year has been hard. Belarusians learned that the road to democracy is long and arduous. But the struggle goes beyond Belarus: All democratic nations have a stake in the future of the country. Not only is there a moral imperative to support our cause, but there’s a strategic one, too, as an autocratic regime threatens to spread chaos across Europe. For the good of the continent, it must be stopped. And Belarusians, who have already come so far, must be free.

The strength of our democratic movement is plain to see. Last year, on Aug. 16, hundreds of thousands of Belarusians took to the streets. Since then, there have been peaceful protests, big and small, formal and informal, all over the country. By the end of the year, up to 1.5 million people had taken part in demonstrations. People organized themselves organically through social media, YouTube and Telegram channels.

There have been setbacks, of course. Our reliance on the internet made us susceptible to shutdowns and censorship — websites blocked, media outlets raided — and the regime’s merciless repression, over time, diminished some people’s appetite for protest. What’s more, we struggled to persuade state and security officials to defect, a prerequisite for the felling of the regime.

In response, we’ve built a new civil society based on a network of solidarity funds, striking committees, citizen media, mutual aid organizations and volunteer groups — often coordinated through secure messaging or even printed newspapers. And we have sought, through our comprehensive plan for national reconciliation, to persuade those not involved in state crimes against Belarusians to join us. The strength of our movement lies in horizontal networks, informal communities and the shared belief in a Belarus that is free, lawful and democratic.

My husband was jailed for daring to run against our president, so I ran in his place. 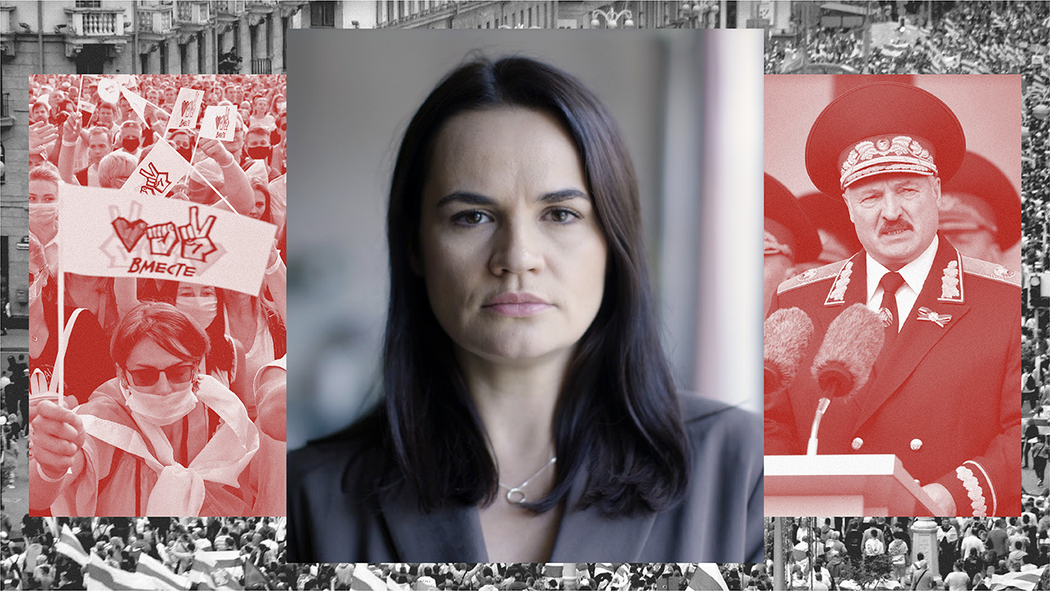 And the world has united around us. Sometimes Belarus — as I discovered when meeting the leaders of 31 countries — is one of the few subjects on which a country’s political groups agree. Now we’re calling for a high-level international conference to develop a road map for a peaceful and negotiated way out of the crisis. Mr. Lukashenko, of course, may try to obstruct such efforts. But we believe it’s possible, through holding a free and fair election under international observation in the next six months.

As I emphasized in my recent meetings with President Biden and Prime Minister Boris Johnson of Britain, democratic countries have a moral obligation to support us: Belarus is on the front line of the struggle between autocracy and democracy. International support has been heartening, but more can be done. We want the democratic community to develop and expand aid programs — such as Denmark’s support for independent media and Germany’s funding for students — for Belarusian civil society.

And the regime must be targeted. We welcome the sanctions announced by the European Union and the United States on the regime’s enterprises and individuals funding or carrying out repression: It’s now crucial to remove any loopholes Mr. Lukashenko and his allies may exploit. The regime should also be cut off from international funding coming from the United Nations, the World Bank or the European Bank for Reconstruction and Development — and denied access to financial support from the International Monetary Fund. What’s more, the dictatorship in Belarus should be brought before international courts to answer for its crimes.

After all, it’s not just about Belarus. The regime has become a security problem for all of Europe. In May, in an act of wanton aggression, the regime forced the landing of a European plane to capture a journalist. Just this month, a Belarusian community leader was found hanged in Kyiv. Unless we contain the bandit at large in the middle of Europe, no European citizen is safe.

The regime, to be sure, could try to buy time for itself — by imitating reform and trying to trade the release of political prisoners for a softening of sanctions, as some state diplomats have suggested. The world should not be fooled. Instead, through strong and united support, the democratic nations across the globe can help Belarus step out of dictatorship and into freedom.