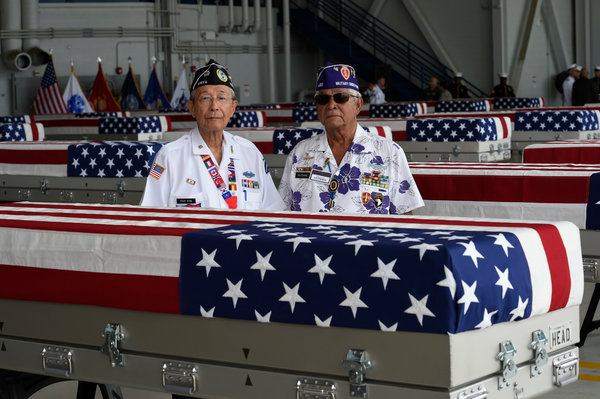 SANTA FE, N.M. — Although more than 320,000 Americans served in the Korean War — and more than 33,000 were killed in action — it is still our Forgotten War, a kind of also-ran in our historical consciousness.

Perhaps it’s because the war ended in stalemate. The closing battle lines were more or less where they started, along the 38th Parallel. “We died for a tie,” Korean War vets sometimes say, and there’s something deeply unsatisfying about that narrative. We Americans understand military victory, and we’ve come to understand loss, but we can’t quite get our heads around a draw.

The men who bled and died in Korea are now taking their bows. They have certainly not forgotten Korea, and they are rightly proud of their accomplishments there. They stopped a naked act of Communist aggression and opposed three malevolent dictators — Stalin, Mao and Kim — while helping South Korea take wing as a democracy. Many Korean War veterans seem mystified that aside from endless reruns of “MASH,” their deeds have been given such short shrift in our national culture.

A few months ago, I had the good fortune to visit South Korea with a large group of American veterans. The trip was part of a generous program, led by the South Korean government, to formally thank these now old men who helped save this tiny country from destruction and set it on the road to what it is now — a modern, technologically advanced society and a staunch American ally, with the world’s 11th-largest economy.

The South Koreans lavished them with free flights, five-star hotels, air-conditioned coaches, bullet train excursions. At the DMZ, across snarls of concertina wire, we gazed upon the police state that South Korea might have become. We were dazzled by the coruscating metropolis of Seoul, which, the last time these men saw it, lay smoldering in ruins. The veterans seemed tremendously moved to learn firsthand: They aren’t forgotten after all.

By and large, though, these stoic, thick-skinned men have come to accept that their achievements will probably always play second fiddle to those of World War II, the marquee event their uncles and older brothers and cousins — the “Greatest Generation” — fought.

Recently I’ve gotten to know one of these Korean War veterans. His name is Franklin Chapman, known as Jack; he’s a retired college security chief and part Cherokee Indian who lives here in Santa Fe. In December 1950, on a subzero night in the mountain wilds near North Korea’s Chosin Reservoir, Mr. Chapman’s convoy, part of the Seventh Infantry Division, came under withering attack by the Chinese. Nearby, the American operator of a 75-millimeter recoilless rifle, mounted on the back of a truck, lost his nerve and abandoned his post in a panic.

A captain stomped among the men, demanding a volunteer to take over the gun. Private Chapman, a 17-year-old string bean from Oklahoma, raised his hand. To this day, he doesn’t know why. “Maybe I was brave,” he told me. “Maybe I was stupid.”

Climbing aboard the truck, Private Chapman could see hundreds of Chinese pressing in, with bugles blaring and bullets sputtering across the snow. He swiveled the big gun and fired.

This time he was hit in the hip, then took numerous pieces of shrapnel. He had just finished reloading when a bullet struck his forehead, embedding itself in his skull. It knocked him off the truck, rendering him unconscious. The Chinese overran his unit and cut it to pieces. The engagement, known as the Battle of Hellfire Valley, had ended.

Hours later, Private Chapman awoke to find himself with 10 other captives, hunched on the dirt floor of a farmhouse. Chinese guards marched them on mountain trails for 19 days until they reached a place called Kanggye, near the Manchurian border. Private Chapman languished there for nearly three years.

When he returned from the war, no parades or celebrations greeted him. His heroics weren’t written up in newspapers or magazines. He quietly went about his life. He joined the Air Force and served for nearly 16 years. When he kept having debilitating headaches, a surgeon removed the bullet lodged in his skull. He keeps it as a relic.

Mr. Chapman, who is 85 and mostly homebound, suffers from neuropathy in his feet from frostbite, a common malady among Korean War veterans. His body is a miscellany of aches from his war wounds and his years in the prison camps. He has also experienced PTSD, although through most of his life the condition wasn’t dignified with a name. It seems somehow apt, for a Korean veteran, that he now suffers from severe memory loss. Sometimes he can’t recognize his own daughter. But his recollections of his war experiences are stark and vivid.

Men like Jack Chapman are gradually exiting our stage. They’re unassuming, uncomplaining men who answered the call and fought for a principle, long ago and far from home, in a war that was not “officially” a war — a war that curiously became a dormant account in our public memory bank. Stalwart and humble old soldiers like Jack Chapman are the reason, on this Veterans Day, we should make the Korean War the Remembered War.

Hampton Sides is the author, most recently, of “On Desperate Ground: The Marines at the Reservoir, the Korean War’s Greatest Battle.”

Michael Kelly: 'Holy communion is more of a holiday than a holy day for too many – and an insult to true believers'