I’m a documentary photographer who was born and raised in California and now lives in New York, and I sometimes feel I’ve already lived two lives — but not because of the changes in geography I’ve experienced. A little more than two years ago, when I was 23, I suffered a spinal cord injury while cliff diving on the Yuba River in Northern California. In a matter of seconds, I became disabled.

I was mostly paralyzed from the waist down, and began using a wheelchair. The doctors could not guarantee that I would walk again, but I persevered. A year later, I had regained some ability to move. I did not regain feeling in the lower half of my body, but I could walk again.

That was when I moved to New York to attend school. The layout of the city pushed me to walk even more. I walked so much that the skin on one of my heels wore completely away (I still lacked the feeling to realize I had injured myself), and the doctor ordered me back to the wheelchair until my foot healed.

I decided I would make the best of it by shooting photographs that would show people what New York looks like from a wheelchair. It started as a fun project, but it quickly evolved into something more when I began to notice how people treated me when I was in the chair. 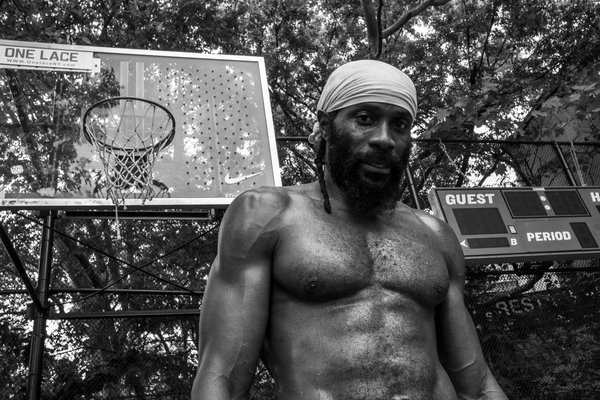 Many people out on the streets would automatically assume I was homeless, or that I was about to ask for money. Some would turn away from me; some would gawk. While some people showed me consideration and kindness, many did not. I found that when you are in a wheelchair in public, there’s rarely a middle ground. There’s never normalized space in that moment, or more generally, in society. I wanted to capture those moments in these photographs.

One of my first days back in the chair, I decided to roll down Houston Street to meet a friend for coffee. It was a beautiful fall day. Autumn has always been my favorite time of the year; I feel the happiest then. I wanted to check the time on my phone, but it was out of power, so I rolled up to a young, well-dressed couple, a man and a woman, on the corner of Houston and Second Avenue. Looking up, I made eye contact with the man. His expression suddenly changed. He grasped the woman by the arm and moved away from me, muttering, “Sorry, we don’t have any money.”

I learned quickly that the lack of accessibility in the city’s subway system adds to the frustration and humiliation. Subway station elevators to the train platforms are frequently broken and there are often no accessible stations where I need to go. I am not supposed to walk, but at times I am forced to ask someone to carry my chair down or up the steps, while I make my way tentatively on foot, putting me at risk of further injury and infection.

On the platform during rush hours, packed trains roll into the station, while dozens of riders crowd in front of the doors, waiting to cram themselves into a car. I am often unable to force my wheelchair into the mass of standing people. On many days, I wait for two or three trains before finding one that has space for me in the car. Once I’m inside people surround me from all angles. My view consists of elbows, buttocks, feet and hands clutching phones. Faces are mostly out of sight.

The city estimates that there are nearly 100,000 wheelchair users in New York City. Fewer than one-quarter of city subway stations are accessible. Activist groups like the People’s M.T.A., the Center for Independence of the Disabled, New York, and Transportation Alternatives have been pressuring the city to make the transportation system usable by all.

Sometimes it feels as though my previous life was a dream. I can barely remember what it was like to be able-bodied. The outline remains, but the details are missing.

Nolan Ryan Trowe is a documentary photographer in New York.

Opinion | One Job Is Better Than Two

Michael Kelly: 'Persecution of Christians is worse than at any time in history – and Ireland's silence on it is shameful'