Home » Analysis & Comment » Opinion | Sexual Harassment Is Illegal, but It May Not Get You Fired

Activists who have protested CBS’s handling of sexual harassment likely breathed a sigh of relief this week: the television network’s former chief executive, Les Moonves, will not get a golden parachute as he exits the company after multiple allegations of sexual harassment and assault.

It’s a small sliver of justice for the women who say he harassed them and then ruined their careers when they rebuffed him. But the fact that he stood to gain any money at all exposes the preposterous way that corporate America has treated sexual harassment.

It’s worth noting what should be obvious: Sexual harassment is illegal. That has been the case ever since Meritor Savings Bank v. Vinson, a 1986 Supreme Court decision that said that sexual harassment violates laws prohibiting workplace sex discrimination. And yet companies that catch an executive engaging in this illegal act can’t always fire him for cause. Even more typically, they turn a blind eye to such conduct. It bears repeating: This behavior violates the law.

In the case of Mr. Moonves, it wasn’t sexual harassment that cost him his job. As The Times reported in September, when the accusations first came to light, “it was the evidence that Mr. Moonves had misled his board — even more than the allegations of abuse from multiple women — that doomed him.”

And it was misleading the board that denied him the $120 million payout promised in his contract if he wasn’t fired for cause. “His willful and material misfeasance, violation of company policies and breach of his employment contract, as well as his willful failure to cooperate fully with the company’s investigation,” allowed the company to withhold the money, the CBS board said in a statement.

That’s because his most recent contract stipulated that “cause” means only a felony conviction, fraud, failure to cooperate fully with an investigation, or a violation of company policies. Allegations of sexual harassment — which is, to repeat, illegal, although it may not be a felony — did not count. It would have been even harder to hold him to account if the acts happened before he joined the company, even if they had gone unpunished by a former employer.

So while the company’s investigation did find that Mr. Moonves “engaged in multiple acts of serious nonconsensual sexual misconduct in and outside of the workplace,” that wasn’t enough to oust him without a huge payoff. It was only after he was also found to have deleted texts in which he tried to silence one of his accusers and lied to the company’s investigators that they were able to withhold it. Had he played by the rules, Mr. Moonves may very well have walked away with his loot. (The fight isn’t over; Mr. Moonves could still challenge the board’s decision, and if he does, his termination deal requires CBS to foot his legal costs.)

Mr. Moonves has denied all the allegations and said that any sexual acts he engaged in were consensual.

This is not a problem unique to CBS or Mr. Moonves. Google paid Andy Rubin a $90 million exit package when he left in 2014 after he was accused of sexual coercion. It similarly paid off Amit Singhal after sexual misconduct accusations. Mr. Rubin denied the allegations, claiming they are part of a “smear campaign” against him; Mr. Singhal declined to comment. Fox News paid Bill O’Reilly $25 million and Roger Ailes $40 million when both men were pushed out after being accused of sexual harassment. Mr. Ailes, who died in 2017, and Mr. O’Reilly denied the allegations. 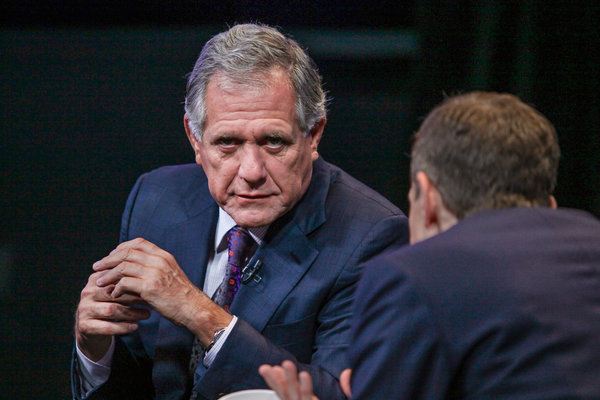 In the wake of #MeToo, some companies are trying to narrow their contract language so that it stipulates that sexual harassment constitutes cause for termination, allowing them to deny a payout to a departing executive. (It’s worth noting that in at-will employment, covering most of us who aren’t high-profile executives, an employee can be fired pretty much at any time for any reason. These contract arrangements are usually reserved for the powerful and famous.)

But if company policies treat sexual harassment lightly, running afoul of them may be tough to do. CBS’s policies “have a ‘check-the-box’ quality,” the investigators found, noting that they even include a provision laying out that employees who lodge a complaint could experience a “negative employment action” that would not constitute retaliation.

Even if a contract includes harassment allegations as a firing offense, it doesn’t mean that an executive will face any consequences. The most common reaction by companies to a complaint of harassment is to try to cover it up or take it out on the accuser, according to a 2016 report by the Equal Employment Opportunity Commission.

If companies took sexual harassment seriously as an illegal act, they might change the way they prepare for and react to it. Would they make allowances for paying out contracts to executives accused of stealing TVs? Would they decide to blame the people their executive stole from rather than take action against him? If an executive thinks it’s O.K. to steal TVs, what else might he do?

The same questions apply to harassment, which frequently go along with other forms of discrimination and abuse. There’s no reason to keep harassers around and in charge when there are plenty of other smart, talented people in the world — even if they bring in lots of business and money. Until corporate America fully digests the fact that harassment has long been illegal, other harassers will continue to collect their checks as they head for the exits.

Bryce Covert is a contributor at The Nation and a contributing opinion writer.

Opinion | A Way for the Supreme Court to Protect Religious Minorities

Dr Ciara Kelly: 'Why few of us would ever sign up to troubled, blood-soaked united Ireland'