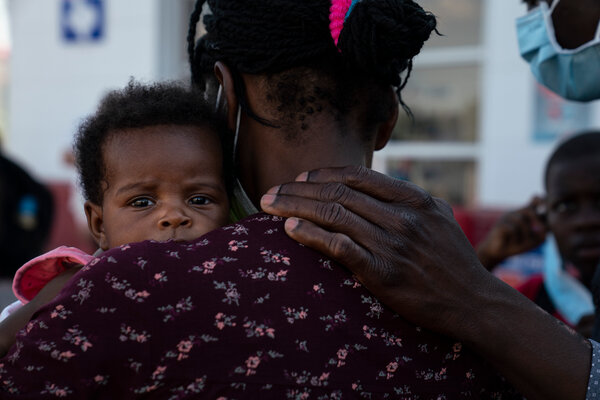 Haiti is now controlled by warring gangs. It suffered a presidential assassination and an August earthquake that killed over 2,200 people and left tens of thousands homeless. Although the United States regards itself as a humane nation, deporting Haitians desperately fleeing staggering poverty and chaos suggests that we Americans have lost our ability to be compassionate.

The arrival in Texas of thousands of mainly Haitian refugees could not have been a surprise. They were, after all, on the way for weeks or possibly months, many coming from South American countries and passing through countries in which we have diplomatic representation.

Could we not have arranged for at least some of those countries to deny them entry or to accept some as immigrants? After all, we do have the means to persuade other nations to heed our requests.

Given the disaster we are now facing in Del Rio, Texas, I feel that it behooves us to provide at least a minimum of hospitality to these “huddled masses” rather than shipping them back, some in handcuffs and shackles, to the poorest country in our hemisphere at a moment when it is struggling with the aftermath of a deadly earthquake.

The stories and images of Haitian émigrés enduring unimaginable hardships to arrive in Texas only to be sent back to their country now on life support after hurricanes, an earthquake and a presidential assassination are enough to make the skies weep.

While the United States, the European Union, Canada and many other countries as well as nongovernment organizations contribute billions, the donations are often wasted by corruption or lack of leadership and coordination. Too much goes where it is not needed, too little to where people are desperate and without food and shelter.

It is long past time for a Marshall Plan to aid our long suffering neighbors. Someone with recognized abilities needs to be appointed by the United Nations, with the full assistance of the donor governments, to direct these efforts before such images of a beleaguered people grow ever more tragic. Are we our brother’s keeper or are we not?

A Plea to Joe Manchin on a Climate Plan: ‘Do What Is Right’

Senator Joe Manchin is going to craft the U.S. climate plan? The man who is making half a million dollars in dividends from a coal brokerage firm every year is going to make the right choices when it comes to carbon pollution? This is folly at best. We’re going to hear “slow down,” “not so fast.”

Senator Manchin, you need to put the interests of the planet and future generations at the forefront. Your personal wealth must not be an influence. The time for action is now. Anything less would be catastrophic. You can either face the reality of our peril, or go down in history as yet another selfish politician who failed his constituents and country, now and in the future.

Be a leader, Joe. Do what is right.

Re “Hidden Agenda Behind the Deal That France Called a Betrayal” (front page, Sept. 18):

The Australian-British-U.S. submarine deal may be a brilliant stroke, but it was done without strategic imagination. What was needed was a three-cornered billiard shot — pivot to Asia, yes, but keep our European allies on board and continue the fight against nuclear proliferation.

Instead, we have simultaneously enraged the French and blown apart 60 years of U.S. policy to minimize the use of highly enriched uranium. Such uranium makes nuclear bombs, and we never wanted it in the hands of nonnuclear-weapon states, no matter how squeaky clean.

Surely there is a way to keep our European allies with us — they are our rear-guard against Russia — and not lend encouragement to nuclear proliferators.

In the 18 months that this deal will be studied before it is set, I suggest bringing the French to the table. They are already well along the road to building submarines for Australia, and they are masters of low enriched uranium nuclear propulsion fuel, which is not so dangerous for proliferation.

Of course, their deal with Canberra cannot remain the same, but surely it can be structured so everybody wins. We need an outcome where Australia gets the silent long-running submarines it needs; the United States, Britain and France get a strategic partner in the Indo-Pacific; and NATO Europe and the nuclear nonproliferation regime come away stronger.

Rose Gottemoeller
Mountain View, Calif.
The writer is a former NATO deputy secretary general and U.S. under secretary of state for arms control and international security.

The Pope, Politics and the Cross

Re “Pope Rejects Political Use of Symbols of the Faith” (news article, Sept. 15):

In warning against the political use of the cross, Pope Francis perceptively alludes to historical as well as to current events. Such practices have been associated, at least since the 11th century, with antisemitism of the most virulent stripe, and its present-day use in Hungary and elsewhere, effectively against Muslim refugees, bears all the same hallmarks.

Western countries generally are no longer distinguishing themselves for their support of the homeless, and the pope’s insistence that actions must take precedence over self-serving devout utterance comes at a very good time.

Opinion | Put the Vandalized Emmett Till Signs in Museums

Barbara McCarthy: 'I love Ireland because we have great craic – but must the glass always be half full?'