Every year in Harlem, hundreds of parents line up outside Riverbank State Park at dawn for an elusive prize: swim classes that they can afford for their children.

From the mighty Hudson River to the rolling ocean waves of the Rockaway Peninsula, New York City is surrounded by water. But a surprising number of New Yorkers can’t swim.

“I’m a little embarrassed about it,” said Jimmy Van Bramer, a City Council member from Queens. “But I grew up poor. I never had swimming lessons or anything like that.” Mr. Van Bramer said that his mother would take him and his siblings to the city pool in Astoria to cool off anyway. 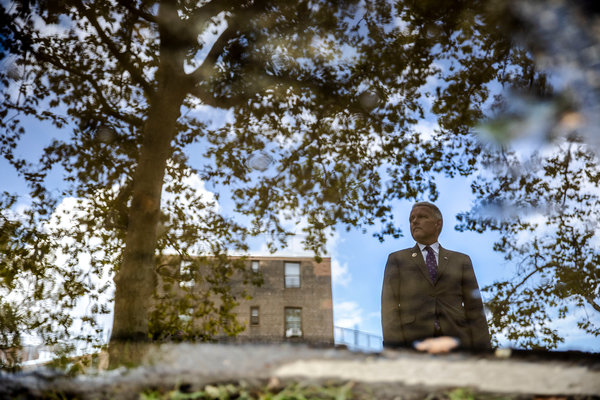 In New York, and throughout the country, nonswimmers are more likely to be black. In 2010, the U.S.A. Swimming Foundation found that 69 percent of black children, 58 percent of Latino children and 42 percent of white children said they had little to no swimming ability. Racial discrimination and poverty have limited African-Americans’ access to pools. Cultural fears about the water that can be traced back to slavery also persist. And so, black children drown at almost triple the overall national rate, according to the Centers for Disease Control and Prevention.

New York City, however, can turn this around for its own kids. If the city works with businesses and nonprofits, it can offer free swim lessons to every single New Yorker.

Swim lessons locally can range from roughly $100 for several weeks of group classes to $50 or more for a single private lesson. For many people, that’s out of reach.

The parks department runs the largest program in the city offering free lessons, serving about 30,000 people every year. This summer, 2,419 are still on a wait list for the lessons, according to the department. A schools program, Swim for Life, provided 10 weeks of swim lessons to 6,000 second-graders this past school year.

Nonprofits across the city have stepped in as well.

Ann Ikeri, a medical assistant, sends her young son and daughter to lessons run by a nonprofit called + POOL, which offers free lessons in low-income communities. “Watching them learn is awesome — because I don’t know how to swim,” Ms. Ikeri said. “I’m learning from them.”

The Swim Strong Foundation has offered 2,500 free swim lessons since 2007. The program is a particular lifeline for residents in the Rockaway Peninsula, in Queens, which has miles of beachfront and many poor black and Latino residents.

Leilani Rodriguez, 9, can see the Atlantic from her bedroom in the New York City Housing Authority’s Ocean Bay Apartments. She only wishes she could swim.

Shawn Slevin, a Queens resident who founded the nonprofit, was distraught when reached by phone recently: The body of a teenage boy who drowned after going missing the night before had been found on the beach. “It’s frustrating,” Ms. Slevin said.

Those who have worked as city lifeguards say New York’s pools and beaches are filled with children and adults who enter the water but don’t have strong swimming skills.

Between 2008 and 2018, 45 people drowned at city pools and beaches, according to data from the city’s health department. That doesn’t include tragedies like the one in 2010, when Crystal Reyes, 15, and David Lee Luccioni III, 17, drowned in the Bronx River on a hot summer July afternoon.

Nor does it include the death of Kimani Brown, a 6-year-old girl from Queens who drowned at a resort in Mexico in 2009. Her uncle, Councilman Donovan Richards, said he is working to get a new city pool in his district in Far Rockaway to provide a place for his constituents to learn to swim. “This is personal,” he said.

The fairest approach would be to start by expanding programs for children and adults in low-income communities, then build the initiative from there.

Wouldn’t $100 per child be a reasonable cost to keep children safe and open the door for them to a world of joy?

To make it happen, the city may need to build more pools in some neighborhoods. New York’s first public pools were built in the early 20th century, a result of campaigns by social reformers to improve the health and living conditions of the poor and immigrants. The second wave of pools in the city arrived in the 1930s and 1940s, constructed by the Works Progress Administration, the depression-era program that helped Americans find work and build infrastructure.

Today in New York — with 8.4 million people — there are 51 outdoor public pools that are open, with two more under repair. That’s more than 150,000 people per pool.

Many city pools have a devoted following, with generations of family members taking advantage of a precious resource. Still, there are also plenty of neighborhoods without one.

The Queensbridge Houses, the largest public housing development in the United States, once had an outdoor swimming pool along the East River. The city closed the pool and filled it in with soil in the early 1980s, according to longtime residents. The parks department wasn’t sure of the exact date, and couldn’t say how many other pools had been closed.

On a hot day recently, Taylor Thomas, 4, jumped endlessly back and forth through a sprinkler at a Queensbridge playground. Her mother, Yolanda Thomas, looked on. “She wants to swim,” she said.

John Downing: Absence of Derry big political leaders, like Hume and McGuinness, leaves the city with 'a vacuum within a vacuum'