You forget that they have no neck muscles, that they can’t see beyond a couple of feet, that someone who is now the size of a zucchini may one day pivot and stuff a basketball over your head. You’ve already forgotten the sleepless nights that you had, the marital strife, your uneasy acquaintance with baby poop.

You wanted grandkids. Now you’ve got identical twins — boys, born small and early and needy, but healthy enough when they’re finally released from the preemie ward that you start asking the questions you should have asked earlier.

Like: Why is the United States the only developed nation in the world without mandated paid leave for new parents?

Like: Why is child care so expensive in this country? The fertility rate has fallen to the lowest level since the United States began tracking births more than a century ago. One big reason is the enormous financial burden placed on working parents.

Like: What about a boy? Or what about two boys? At school, they’re falling behind girls at every level. Boys are broken, they’ve been left behind, goes the cultural lament.

And this one: What kind of world are we bequeathing these six-pound humans? Representative Alexandria Ocasio-Cortez was mocked by the usual hate trolls when she wondered whether, given what we know about climate change, it is “still O.K. to have children?”

She didn’t say, “Don’t have children.” She noted the scientific consensus that the lives of those born today will be fraught with danger from a violent and unstable climate. We have only a few years left to reverse the trajectory of this befouled planet before a nearly irreversible hell befalls us.

Scary thoughts, much of the above, but none of them should be joy-killing, not at first. Playgrounds are the true geography of hope, to steal from Wallace Stegner, for nothing is more renewing than innocence in a tiny package.

As a new grandparent, you may be lucky enough to do some of the advocating that your overworked children cannot. I say “may” because many of the new grandparents I know have been drafted into full-time day care, with time for nothing else. In more than half the states, child care costs more than tuition at a public university, which is already too high to launch a life. 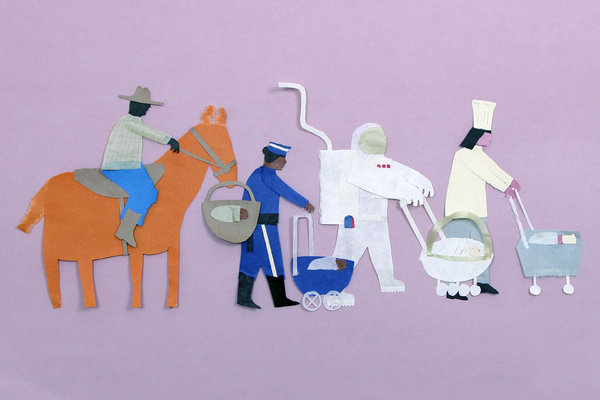 You can blame millennials for ruining many things — breakfast, conversation, sex — but this one’s on the boomers and above. Only 9 percent of the federal budget is spent on children. As a nation, we allocate about four times as much on retirement and health benefits for aging adults. We’ll soon be spending more paying interest on the debt — a crater created by a tax cut benefiting mostly rich, older Americans — than on children. This is Donald Trump’s only legislative legacy.

History holds some answers. During World War II, the federal government subsidized nationwide day care centers to help the 6.5 million women who joined the work force. These places included doctors, nurses, even personal grocery shoppers. It would make the French — who put us to shame with their way of raising de-stressed, minimally fussed-over, healthy children of parents on expansive maternity and paternity leaves — envious.

When President Barack Obama sketched a proposal for universal child care and expanded parental leave, Republicans derided it as a liberal fantasy — ensuring that the United States would remain the most backward developed nation for families. And a plan by Senator Elizabeth Warren to tax the wealthiest Americans to pay for universal child care has been met with similar scorn by the G.O.P.

So long as good ideas will die in vitro from a party ruled by men, women will continue to pay a steep penalty for having children. For now, you turn to small acts for the new babies, and work to oust the man-baby in the White House.

Being a grandparent is not a do-over, not a chance to make up for your mistakes. You get to read “Hop on Pop” and “Goodnight Moon” again. You overlook the mild cultural insensitivity of “Curious George” to cheer on his adventures beyond the reach of the Man With the Yellow Hat. When the kids start to spout opinions of their own, you’ll point them to the most timeless American role model for a boy — not Bart Simpson, but Huck Finn. And they’ll know where to find a sugar high in your house.

But the ultimate responsibility is not yours, unless forced on you by tragedy or circumstance. You will roll your eyes at the imperious certainty of new parents. You’ll recall your own mother, who produced seven children, dismissing baby boomers acting like the first generation ever to raise kids. And you’ll shock your children with your parents’ solution to all the postnatal stress — early cocktail hour.

You can do one big thing, as a wise friend told me some time ago. That is: With every action, political and personal, try to ensure that you will be thought of, after you’ve passed, as a great ancestor.

The Times is committed to publishing a diversity of letters to the editor. We’d like to hear what you think about this or any of our articles. Here are some tips. And here’s our email: letters@nytimes.com.

Michael Kelly: 'Deflated Irish pro-life campaign can take heart from the number of young people joining fight in US'