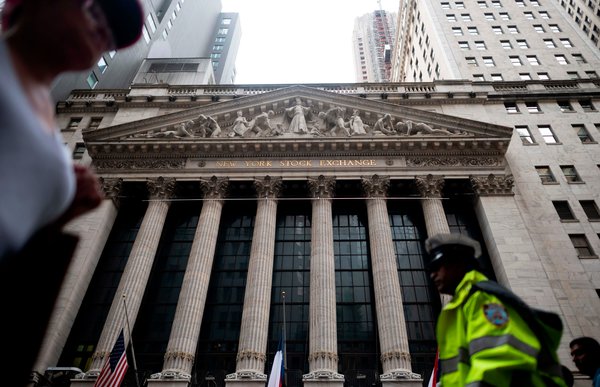 Why does the bond market reflect economic expectations? If investors expect a boom, they also expect the Fed to try to rein in the boom by raising short-term interest rates (which it more or less directly controls), to head off potential inflation. The prospect of higher short-term rates then leads to higher long-term rates, because nobody wants to lock money in at a low yield if returns are going up. Conversely, if investors expect a slump, they expect the Fed to cut rates, and pile into long-term bonds to lock in returns while they can.

So the slump in long-term yields since last fall, from a peak of 3.2 percent to just 1.63 percent this morning, says that investors have grown drastically less sanguine about the economy. Long-term rates are now notably lower than short-term rates — and this kind of “yield curve inversion” has in the past consistently been the precursor to recession:

Bond investors could, of course, be wrong — there are some people out there claiming that we’re in a bond bubble. And so far the real economy, as measured by G.D.P., job growth, and all that, is still chugging along. But as I said, there’s clearly a wave of pessimism sweeping the market. What’s it about?

One answer is that last fall many investors were looking at a couple of quarters of high growth, and thinking that this might be the start of an extended boom. Serious economists warned that this growth was a temporary lift — a “sugar high” — driven by the shift from fiscal austerity to what-me-worry deficit finance. But at least some people bought into the Trumpist line that tax cuts were going to produce an enduring rise in the growth rate.

Since then, however, it has become clear that the tax-cut boost was indeed a one-time thing. In particular, there has been no sign of the promised surge in business investment.

At the same time, Trump’s trade war may be starting to take a toll. In particular, the uncertainty may be deterring business spending. Whether new tariffs would hurt or help your business, it now makes sense to hold off on plans to expand, until you see what he actually does.

Finally, economic troubles in the rest of the world — several major European economies are quite possibly in recession — are filtering back to the U.S.

Now, most economists aren’t predicting a recession here, for good reason. The truth is that nobody is very good at calling turning points in the economy, and calling a recession before it’s really obvious in the data is much more likely to get you declared a Chicken Little than hailed as a prophet. (Believe me, I know all about it.) But the bond market, which doesn’t worry about such things, is looking remarkably grim. I leave the possible political implications as an exercise for all of you.

Wanna live to be more than 100? The trick, it turns out, is to be born someplace with bad record-keeping.

China has the power to do whatever it wants in Hong Kong. Why hasn’t it deployed the mailed fist (yet)? Because rule of law has real economic payoffs.

U.S. conservatives only pretended to care about debt. But the Germans really mean it — and their frugality is turning into a disaster.

If you’re enjoying what you’re reading, please consider recommending it to friends. They can sign up here. If you want to share your thoughts on an item in this week’s newsletter or on the newsletter in general, please email me at [email protected]

Another from the Highwomen: a Fleetwood Mac classic, with violin replacing Lindsey Buckingham’s guitar. Gorgeous.

Review our newsletter help page or contact us for assistance.

John Downing: 'Brexit reversal would be loved here – but is still unlikely to occur'