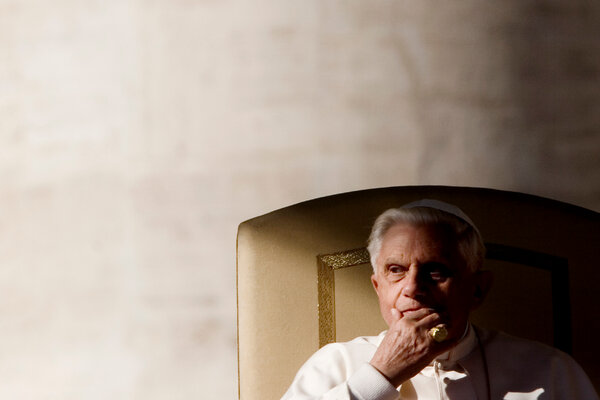 The first pope to resign was Celestine V, born Pietro Da Morrone, who was living the life of a pious hermit when he was elevated to the papacy in 1294, in his 80s, to break a two-year deadlock in the College of Cardinals. Feeling overmastered by the job, he soon resigned in the expectation that he could return to his monastic existence. Instead, he was imprisoned by his successor, Boniface VIII, who feared that some rival faction might make Celestine an antipope.

The former pontiff died after about a year in captivity; his successor, one of the most ambitious of medieval popes, eventually fell into a disastrous struggle with the king of France that ended with Boniface temporarily imprisoned in the weeks before his death.

The strange afterlife of Pope Benedict XVI’s pontificate, which ended with his death on Saturday at 95, was not quite so wild or dramatic. But like Celestine’s experience it was not exactly an advertisement for papal resignations. For almost a decade the former Joseph Ratzinger played a peculiar and poorly defined role as “pope emeritus,” neither fully secluded nor formally active, even as his successor, Francis, sought to dismantle important parts of his work.

The former pope promised to live out his days “hidden from the world” and presumably expected to see his legacy secure. Instead, he conducted a post-papacy of ambiguous gestures in response to a Vatican that had been delivered, by the mysteries of God’s providence, to his longtime foes.

Looking back to what I wrote upon his retirement in 2013 is a strange experience, because much of that analysis ceased to apply within just a few years of the resignation. At the time, I argued that Benedict, as pope and earlier as John Paul II’s doctrinal chief, had worked tirelessly to prevent the ruptures that followed the Second Vatican Council — the collapse of Mass attendance in the Western world, the wars over liturgy and sexual ethics — from breaking up the Roman Catholic Church.

A great theologian, part of the brilliant generation that advised the bishops at Vatican II, he put his brilliance in the service of continuity — offering a sustained reassertion of the church’s core beliefs, a defense of traditional piety against academic revisionists, a lifelong argument that the Second Vatican Council hadn’t simply overwritten the church that existed for centuries before.

This work made him an intellectual inspiration to many Catholics, especially converts seeking a synthesis of reason and supernatural religion; the influence of his writings — from his “Introduction to Christianity” to the trilogy on the life of Jesus that he wrote as pope — is likely to outlast the celebrity of both John Paul II and Francis. It also made him many enemies, especially among liberal Catholics who felt that his enforcement of orthodoxy was punitive, and that the church needed ongoing revolution to fulfill God’s purposes in the modern world.

But until his resignation, it appeared that his quest for stability and continuity had provisionally succeeded, that he was handing on a real synthesis (certain tensions and difficulties notwithstanding) of the church before and after Vatican II, and that his efforts had preserved Catholicism from the schisms that divided other global Christian communities (Anglican, Methodist) after the social revolutions of the 1960s.

What the resignation yielded, though, was not what Benedict had presumably expected. The assembled cardinals chose an unpredictable outsider as his successor rather than another conservative. And the Francis pontificate was quickly defined by a sweeping push for liberalization, a striking shift of personnel and policy and a reopening of many of the 1970s-era debates that Benedict had tried to settle.

This agenda has not yet succeeded in achieving the church of liberal Catholicism’s desires: Again and again Francis has seemed to push toward an explicit change on some controverted issue, from communion for the divorced and remarried to the rule of priestly celibacy, only to choose a more ambiguous course instead. And in certain cases, as part of his strange post-retirement role, Benedict made intellectual interventions that seemed to operate as warnings to his successor not to go too far.

But the Francis era has certainly returned the church to a state of open theological division. The liberal churches of northern Europe, with the German bishops in the lead, are pushing hard for revolution — meaning progressive positions on sexual issues, lay leadership and intercommunion with Protestants.

The more conservative hierarchy in the United States is regarded by some of Francis’ allies as dangerously rebellious, accused of tolerating a spirit of rupture on the right. And after all of Benedict’s efforts to reconcile the church’s traditionalists with Vatican II, to create space for the Latin Mass within the modern church, Francis has re-imposed stark restrictions on its celebration, deliberately pushing traditionalists back toward schism.

Under these pressures, the vision of continuity and stability that Benedict championed is being pulled apart from both sides — from the left by the idea of Vatican II as a continuing revolution, a council whose work will never end, and from the right by a mixture of pessimism and paranoia, an very un-conservative alienation from papal authority whose endpoint is difficult to foresee.

One can make an argument, as pious Catholics sometimes do, that the operation of the Holy Spirit means that the biggest decisions in the church — like the election of a new pope, or presumably a papal resignation — are all straightforward expressions of God’s will. In the case of Benedict’s resignation and its aftermath — with the apparent undoing of his work, the return of Catholic civil war — such an argument might suggest that all his labors only suppressed divisions that needed to be publicly expressed, that the current threats of schism are simply part of a process the church needs to pass through to find unity and confidence again.

But Benedict himself was doubtful of this kind of piety. While he was still a cardinal, he told an interviewer that the Holy Spirit could not be said to simply pick each pontiff, since “there are too many contrary instances of popes the Holy Spirit obviously would not have picked.” Rather, God supplies a more limited protection, a guarantee that, as Benedict phrased it, “the thing cannot be totally ruined,” which does not preclude terrible mistakes.

It seems very hard for any admirer of Benedict to look at the events that followed his resignation and see a vindication of his decision to retire, a simple working out of the Holy Spirit’s will.

At the same time, his full legacy will be felt across decades or even centuries. All we can say from his strange years as pope emeritus is that the way that Pope Benedict XVI sought to govern the church, to hold it together institutionally and theologically, has been challenged and partly reversed.

Opinion | A Flood of Lies