What my time working on a North Dakota oil patch taught me about America’s fossil fuel addiction — and how to curb it.

Mr. Smith is a folk singer and playwright based in Kentucky. He is the author of the forthcoming “The Good Hand: A Memoir of Work, Brotherhood, and Transformation in an American Boomtown,” a book about his time working on the oil fields of North Dakota.

Look around you: chances are that every object within your field of vision contains refined petroleum.

The varnish on your desk, the paint on your walls, the finish on your floors. Unless the chair you are sitting on is made of untreated wood, then your butt is resting on synthetic materials derived from petrochemicals. Plastic is petroleum based: the components of your phone and computer, your printer and audio speakers. Take a sip of coffee and think about it. The glaze on our mugs comes from oil.

Oil was once thought to have mystical properties. In western Pennsylvania, the cradle of American oil exploration and production, shamans from the Seneca tribe used the strange black substance in ritualistic healing exercises. They also used it to cauterize wounds and seal canoes. For white men, the gunk seemed more trouble than it was worth. With grease gumming up salt drilling operations in the area, a local entrepreneur found a way to profit from it, mixing it with liquor and selling the drink as a cure-all. Oil has been linked to medicine ever since.

Delivery agents such as gel caps, balms, salves and gelatin pills contain petroleum. More important, as a 2011 study titled “Petroleum and Healthcare” points out, “nearly 99% of pharmaceutical feedstocks and reagents are derived from petrochemicals.” Acetylsalicylic acid, the active ingredient in aspirin, for instance, is created by a chemical reaction involving petrochemicals. Oil doesn’t simply transport medicine into our systems. It isn’t too far off base to say that much of medicine is oil.

In 1858, Edwin Drake arrived in the town of Titusville, Penn., near the home of the Seneca, with the express desire of drilling the world’s first oil well. Drake was a 39-year-old railroad worker with a bad back. A sucker’s sucker, he had embarked on his journey under a one-year contract with the Seneca Oil Company signed on April Fools’ Day. He had no experience in business or mining; his main qualification seems to have been a starry-eyed gullibility. Titusville was barely a town. Upon arriving, Drake had to travel 45 miles to buy a shovel. However, he stuck it out. Our man got his shovel! More than a year after arriving, Drake struck oil.

Refined into kerosene, oil quickly came to replace whale fat as the world’s primary illuminate. It was the first spark to truly brighten millenniums of darkness. Kerosene made the day longer. It may seem mundane now, at the time, this was described in quasi-religious terms.

Like so many of the now assimilated effects of life in the carbon age, it is all but impossible not to take this for granted, but indoor lighting revolutionized life on earth. Factories that once closed their doors at dusk could now run 24 hours a day. Students could study after dark. Until humans refined petroleum, neither was true. It remains true now that kerosene is considered impractical (a lot of people blew themselves up lighting the lamps) because of electricity, which is often powered by coal and natural gas. When the sun goes down, we have light because of fossil fuels.

We also have man-made climate change. This puts us in a position of paradox. The very thing that sustains our modern way of life has become a threat, possibly the greatest threat to life on earth in the history of humankind. As any addict will tell you, the first step is admitting you have a problem. And a problem this big requires bold political, economic and technological moves. It also requires — and we can’t allow ourselves to forget this — cultural and personal change. Because while life itself is irreplaceable; a way of life is basically “stuff we do.”

As we accept our responsibility to address this awesome generational obligation, and as we work to put in place policies that balance our need for bold action with the more modest day-to-day needs of working people, it would behoove us to keep in mind the story of this precious resource, to consider how it connects us each to the other, and to contemplate, not only what we must sacrifice, but also what we stand to gain by greatly reducing our reliance on it.

I hadn’t given much thought to any of this until I experienced my own personal oil boom. In 2013, I traveled west to Williston, N.D., where like thousands of other men looking for work, I applied for jobs in the oil field. The housing crash, along with a spike in worldwide oil prices, as well as advances in drilling technology — horizontal drilling and hydraulic fracturing, better known as fracking — had combined to make northwest North Dakota go boom. 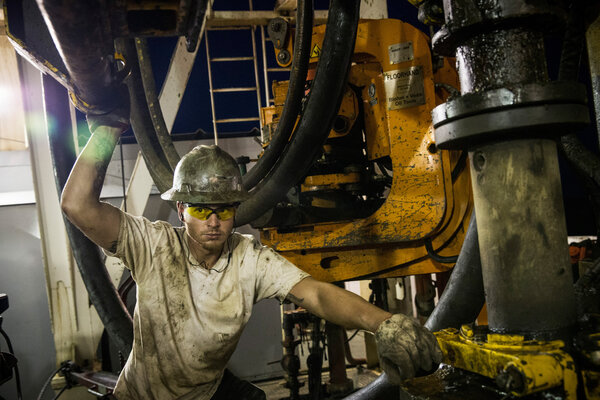 Drilling companies moved in and workers, like me, followed. Williston’s population in 2008 was around 12,000. Within five years, it had tripled, some say quintupled. Men slept in their trucks outside the town’s Jobs Services office. I rented a mattress on a flophouse floor in a three-bedroom townhouse packed with migrant workers. We were chasing the money that was chasing the oil.

I landed work as a swamper for a rig moving company. Rigs drill until they get the oil flowing, then they need to be pulled apart, loaded onto tractor-trailers, moved, and — like skyscraper-sized Lego sets with pieces the size of fire trucks — put back together over a new well head. A swamper is basically a rigger. My days were spent at the back end of a crane or gin truck, slapping chains and hooks onto incredibly heavy steel objects and trying not to kill anybody.

I vividly remember the first time I saw a derrick raised. The derrick is the tower that supports the network of pipe that is inserted into the earth for drilling. Watching it pivot slowly upward to 160 feet in the air, framed by a window of perfect blue sky, I took out my phone and recorded a video. I was bearing witness to the beginning of a process in which men would wrestle the modern age’s most precious material from deep inside the earth. There was something weirdly magical about it.

As rough and rowdy as many of the oil field hands I worked with were, these men knew oil. They knew it from the top of their invert smeared hard hats to the bottom of their steel-toed boots. And they taught me. Until then, if I thought about it at all, I thought of oil only in terms of transportation and war. But my co-workers’ practical knowledge peaked my interest. I began delving into the history of black gold.

A decade after Drake’s Well struck oil in Pennsylvania, a gasoline-powered internal combustion engine was attached to a pushcart. It wasn’t long before the automobile was born. By 1900, about 4,000 cars lumbered down the dirt roads of the United States. By 1913, Model T Fords were falling off assembly lines. War pushed the new technology further into the future. It was American and British oil-fueled machines that defeated Germany’s coal-burning operations in World War I, and then again, in World War II.

In 1956, President Eisenhower signed the Federal-Aid Highway Act, authorizing construction of 41,000 miles of interstate highways, the biggest public works project in American history. The bill not only profoundly altered America’s topography, it also reshaped the way humans experience it. Lewis and Clark had navigated their way up North America’s many natural rivers; after the Federal-Aid Highway Act, Americans would negotiate the country on rivers of oil, experiencing its natural beauty through the windows of cars: cars powered by the petrochemical gasoline, over roads built by the petrochemical asphalt. Oil became the boat and the river. Driving became an inextricable part of America’s cultural identity, and as midcentury mass production combined with expendable incomes and the advertising power of television, so did consumerism.

Opinion | Adam Kinzinger, I Can Relate: When Politics Divides Families