After the stormy tenure of Jeff Sessions as attorney general, the likely return of William Barr to the job — which he held with distinction under President George H.W. Bush — has been greeted with sighs of reliefs at the Justice Department. The reason is not hard to divine: Bill Barr is an accomplished lawyer with a deep respect for the law and for the integrity and independence of the department — something I know from having served under him. After his solid performance before the Senate Judiciary Committee on Tuesday, he seems almost certain to be approved by the full Senate.

His critics have focused on a 19-page legal memorandum he sent over the summer to Deputy Attorney General Rod Rosenstein questioning whether the special counsel, Robert Mueller, could investigate the president for violating criminal obstruction-of-justice laws. Democrats have demanded that if confirmed, Mr. Barr should recuse himself from overseeing the Mueller probe. But that response to Mr. Barr’s meticulous legal analysis is wildly overwrought.

A more dispassionate review of Mr. Barr’s memo shows that he was trying to prevent an unprecedented expansion of a federal criminal statute intended to prevent crimes such as destroying evidence, bribing prospective jurors, intimidating witnesses and the like. The memorandum expressly acknowledges that presidents, like other citizens, can run afoul of the criminal laws. But he questions whether a president can be investigated for actions that are expressly within his constitutional powers — such as firing an F.B.I. director. He is sounding a clear warning against prosecutorial overreach.

Indeed, one of Mr. Mueller’s senior prosecutors was a primary architect of a legal theory of obstruction that was unanimously rejected by the Supreme Court, a rebuff delivered only after the prosecution caused the collapse of a major accounting firm, Arthur Andersen. That example does not stand alone. In case after case, a wary — and frequently unanimous — Supreme Court has knocked down legal theories drummed up by well-meaning but overly zealous federal prosecutors.

The inherent danger of prosecutorial overreach, the Barr memorandum emphasized, is all the more acute when applied in the sensitive context of presidential power. Firing James Comey, the F.B.I. director, may have been wise or unwise, but it should not in conscience be stretched to accuse a sitting president of criminal conduct. Nor should the mere expression of hope that Mr. Comey would go easy on Mr. Trump’s embattled national security adviser, Michael Flynn, somehow be transmogrified into a violation of federal law. To do so would flout first principles in our constitutional order of separated powers. Holding the president accountable for the exercise of his powers under Article II of the Constitution is a task entrusted to Congress, not to a largely unaccountable special counsel.

Fairly reviewed, the Barr memorandum is a dispassionate analysis that provides an important perspective to the senior leadership of the Justice Department. Indeed, it bears emphasis that the memorandum also went to Steve Engel, the head of the department’s Office of Legal Counsel, which provides the president legal advice. This is the same office that has issued formal opinions in both Republican and Democratic administrations saying that a president cannot be indicted while in office.

Mr. Barr makes clear throughout the memorandum that he does not know all the underlying facts and appropriately qualifies his analysis with repeated “it appears” and “apparently.” Those caveats are highly relevant as the Senate deliberates his nomination. They demonstrate the vital quality of a careful lawyer’s open-mindedness, which has been vividly on display in recent days, when Mr. Barr has pledged to protect the independence of the Mueller probe.

“It is in the best interest of everyone — the president, Congress and, most importantly, the American people — that this matter be resolved by allowing the special counsel to complete his work,” Mr. Barr told the Judiciary Committee. “I will follow the special counsel regulations scrupulously and in good faith, and on my watch, Bob will be allowed to finish.” 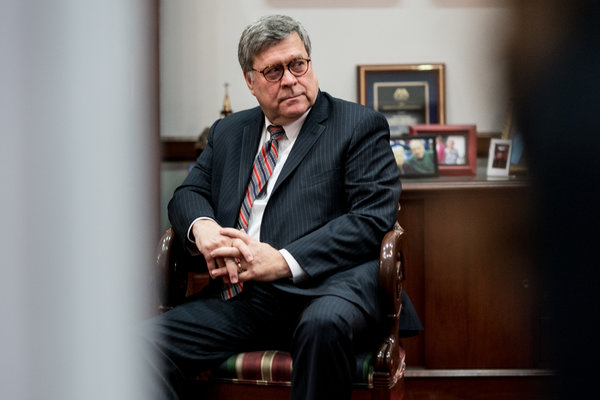 Once Mr. Barr is confirmed, the Justice Department’s ethics officers will carefully review whether he should be allowed to oversee the Mueller probe. In light of what we know, I see no reason he should step aside. Expressing his legal perspective on a legal theory of obstruction of justice should not come close to justifying the extraordinary action of requiring him to recuse himself from what will be one of the new attorney general’s most pressing responsibilities.

The constitutionally ordained process of advise and consent should now be allowed to unfold. I am confident that Bill Barr will respond to all questions and concerns in a fair and honest way. I am also confident that he will be deeply respectful — as a matter of honor and integrity — of whatever advice he receives from the Justice Department’s ethics officers. Based on his long record of distinguished service, the American people can count on him to do the right thing.

Kenneth W. Starr is a former president and chancellor of Baylor University and a former solicitor general in the George H.W. Bush administration.

Claire Cohen: 'Just for women: Why we still have a problem with female writers'