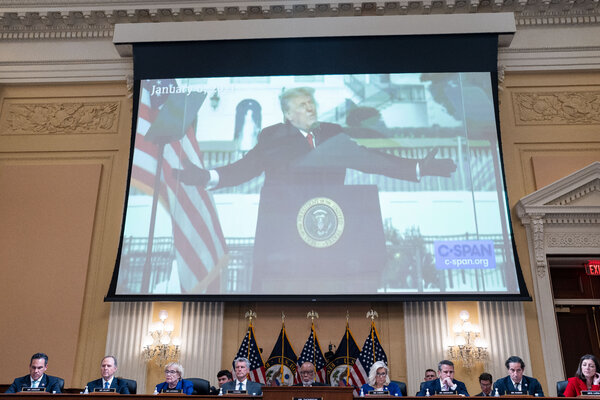 On Thursday, the House select committee held what is possibly its final public hearing on the Jan. 6 insurrection at the Capitol. The importance of this hearing was not so much that it revealed any startling new revelations; it did not. Nor that the committee will subpoena Donald Trump to testify, a request that he will surely fight in court.

What is stunning, and seemingly irrefutable, is the weight of the evidence about what transpired that day and those who were involved. The cumulative evidence paints a stark picture of Donald Trump’s role in precipitating the assault on the Capitol.

It is not clear if the House committee will criminally refer Mr. Trump to the Justice Department. What these hearings have made abundantly apparent is that Mr. Trump knew that he had lost the 2020 election and yet suborned his vice president, Mike Pence, to illegally refuse to certify the electors.

The hearings have also made manifestly clear that in terms of character, temperament, morals and ethics Donald Trump is fundamentally unfit to ever serve again as president. If these hearings have made his re-election highly unlikely, if not impossible, they will have delivered a consequential and lasting benefit to our country, and to the world.

The Jan. 6 committee hearing on Thursday left no doubt that in the days between the 2020 election and the Jan. 6 attack on the Capitol, Donald Trump had more than ample reason to concede that he had lost. Senior advisers and cabinet secretaries told him so. Family members told him so. The reason he didn’t was that he just didn’t want to lose.

The hearing made clear that his very specific plans to overturn the election began before the election even took place. It continued right up to his charge to that mob he’d summoned to Washington that it converge on the Capitol with the hope of delaying the formal counting of electoral votes. He knew that tally would be the final nail in his re-election coffin.

Vice President Mike Pence wouldn’t stop the tally; Mr. Trump had to. It was ugly, but the system held. That Donald Trump isn’t in jail today is puzzling; that he is considering running for re-election is a disgrace.

The Jan. 6 House committee has been doing a masterful job of uncovering and presenting information about the insurrection.

The hearings have been exemplary not just for the amount of evidence collected and assembled in a compelling way, but also because the presentations have reflected a deep commitment to truth.

Little if anything has been affirmed without supporting evidence, a process very unlike the grandstanding, vicious attacks, interruptions, and careless, often irrelevant, and sometimes outlandish claims seen in so many House and Senate hearings.

The second praiseworthy aspect of the hearings is the respect the committee members have shown for one another. This was obvious even in the structure of the proceedings, as members shared responsibility for different sections of the presentations.

The respect the members evinced for one another continued in their treatment of witnesses, almost all of whom were Republicans. Such respect and commitment to truth and to the rule of law would have been constantly obstructed had Representative Kevin McCarthy not withdrawn his nominees to the committee.

It has been inspiring to see elected representatives work in a bipartisan manner with such diligence and dedication to support our country and to model the sort of government of which we are capable.

The Parkland Gunman, a Horrific Crime and Mental Illness

Re “Parkland Gunman Is Sentenced to Life in Prison” (front page, Oct. 14):

Although many are shocked, I am not surprised by the jury’s decision that the mitigating factors of the Parkland shooter’s life, presumably his mental health, outweighed the crimes’ aggravating factors. Our psychiatric team’s research findings provide important context to the complicated backgrounds of these mass shooters who suffer from abuse, dislocations and severe undiagnosed brain illness.

Though the vast majority of those suffering from psychiatric illnesses who are appropriately treated are not violent, there is a growing body of scientific research that indicates a strong association of untreated brain illness with those who commit mass shootings. This research demonstrates that such untreated illness combined with access to firearms pose a lethal threat to society.

I hope our nation can start to move forward on much-needed mental health solutions for people who are struggling so no other families have to sit in a courtroom while their loved one’s last moments are recounted in heartbreakingly excruciating detail. We must do better.

Nina E. Cerfolio
New York
The writer is a clinical assistant professor at the Icahn School of Medicine at Mount Sinai.

From the beginning, the cost of the three-month trial to the taxpayers alone should have been enough not to pursue the death penalty. Nikolas Cruz, the Parkland gunman, had already pleaded guilty and a life sentence was guaranteed.

That being said, some crimes are so abhorrent that nothing less than death will suffice. There were no accounts of racial bias, incompetent counsel, misconduct committed by police officers or prosecutors, or a Perry Mason moment. The death penalty reinforces the belief that bad things happen to those who deserve it.

Nikolas Cruz fits this portrait and deserved death. Justice was not served.

In “Initiative Wants to Help Adams Create Policy Goals for New York City” (news article, Oct. 5), I am quoted as saying, referring to Mayor Eric Adams, “I’ve never seen anything or heard anything that spells out what his agenda is.”

My statement has been interpreted by some as criticism of the mayor. This was not my intent. Rather, I was trying to say that with all the crises this mayor has had and continues to deal with (i.e., crime, migrants, monkeypox), communicating his priorities has been a challenge.

The new think tank I co-founded, the 5Boro Institute, wants to help the mayor by developing some long-term policy suggestions to help combat the mental health crisis, deal with impending fiscal challenges and improve public education, among other issues. I did not mean to suggest that the mayor has few accomplishments or policy goals, nor is it accurate.

It is still early in his first term, and the mayor has already rolled out an ambitious child tax credit program to combat poverty; has skillfully calmed down a few public health crises, including a monkeypox outbreak and a polio scare; has been fighting to improve public safety while successfully bringing down murders and shootings; and has been tackling our coming budget crisis head on.

I, like most New Yorkers, am rooting for the mayor, and as a lifelong public servant I want to help him be successful in reviving our great city from the damage caused by the pandemic.

Opinion | We Want a ‘New Normal.’ It’s Not in the Forecast.