Home » Analysis & Comment » Opinion | The Logic of Escalation in Ukraine 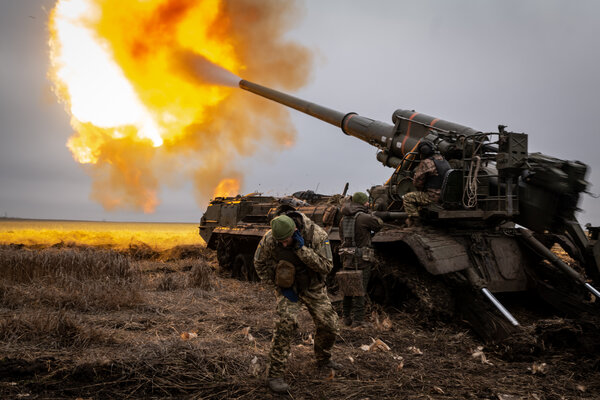 When the Ukrainian military made rapid advances in its autumn campaign, the fears of Russian nuclear retaliation were connected to a longstanding American interpretation of Russian strategic theory: “escalate to de-escalate,” the idea of using a limited nuclear strike to raise the stakes of conflict so high that your enemies see no choice but to bargain, regardless of their conventional advantages.

In the months since, the return to a war of attrition and various Russian disavowals have eased nuclear anxieties somewhat. But an “escalate to de-escalate” theory remains relevant to the situation in Ukraine, because it seems to inform both the American and Russian strategies — conventional, not nuclear — for the spring campaign.

Note that I said American strategy and not Ukrainian. Ukraine’s desired strategy remains what it’s been, understandably enough, for the entire war: escalate to win. Kyiv wants as many weapons as the West can send, it wants to reclaim every inch of territory, and it doesn’t want to entertain terms that would concede anything to the invading Russians.

This attitude is shared by many hawkish voices in Europe and America, who continue to plan for Ukraine’s triumph and Vladimir Putin’s overthrow. But it is probably not shared by the Biden administration, or at least not by the key decision makers.

Yes, the formal White House position is that Ukraine will have our support all the way to victory. But the cautious approach that President Biden and his team have taken to armaments that might radically change the balance of the war, the nudges encouraging Kyiv to show openness to negotiation, the concern about investing too heavily at the expense of our Asian commitments — all of this indicates that the White House’s proximate goal is a favorable armistice, not complete Russian defeat.

To get to that imagined peace, though, you need to persuade the Russians that a true armistice — as opposed to another “frozen conflict,” in which warfare dies down but peace is never formally established — is in their interests, that if they keep the war simmering they will continue losing men and material at a brutal, regime-destabilizing pace.

One hope was that the Ukrainian counteroffensive last fall and Europe’s so-far successful endurance of the winter months would be decisive in pushing Moscow toward accepting this reality, and even toward elaborating its own proposals (no doubt unrealistic ones at first) for a negotiated settlement.

But instead the Russians seem to be not just digging in but also girding for their own renewed offensive. Which explains, in turn, why the Biden White House and our European allies are cautiously — and with a certain amount of Germanic hesitancy — turning the dial of escalation, enabling an increase in tanks and heavy armor flowing into Ukraine.

So far this is not a policy designed to completely overwhelm a Russian mobilization or drive the Russians out of Ukraine. It’s a policy seemingly intended to blunt any new offensive, to potentially make the Russians lose more ground, and to show Moscow that it can’t win a grinding war any more easily than it initially hoped to win a short one. It’s an escalation that assumes the Russians need a little more convincing, and then they’ll be open to the de-escalation that we haven’t been able to achieve.

But a similar logic also seems to be driving the Russian strategy — to the extent that we can see through the dark glass between us and Russian intentions, that is.

From the assumed Russian perspective, Ukrainian gains in the fall and European resilience in the winter have made military success only more urgent. There’s no point in elaborating peace proposals so long as the Ukrainians are convinced that they can win a total victory, and they’re more convinced of that than ever.

So only once that hope is broken by force of arms can a settlement acceptable to Moscow begin to emerge. Which makes it necessary to prove militarily that stalemate is absolutely the best that Kyiv can hope for, that American and European support may suffice to hold ground but not to sweepingly reclaim it. And such proof can be delivered only through escalation, with de-escalation hopefully waiting on the other side.

Hawks will object to this analysis by noting that we have no proof Russia actually wants real de-escalation at any stage short of conquest. (Hence the hawkish case for a more maximal, regime-change-oriented American commitment.) Doves will object that I’m overestimating the Biden White House’s real desire to reach a settlement and underestimating how much U.S. policy is being set by war fever, military-industrial imperatives or a decaying liberalism’s romance with a distant nationalism. (Hence the dovish case for reducing or refusing further military aid to Kyiv.)

But the reason to see the situation in the terms I’ve described, with both Washington and Moscow imagining themselves escalating toward a peace settlement, is that it’s such a historically familiar situation. A war breaks out, it’s expected to end swiftly but a stalemate ensues instead, and both sides become convinced that increasing their commitment to the conflict will bring it to a swifter end on more favorable terms.

This mutual conviction isn’t a matter of romance or fantasy or simple folly (though of course those forces enter in). Instead, escalation is embraced as a coldly logical decision, as the only reasonable course.

And out of such rationality, you get closer to the irrationality of fighting for years in a war that neither side can fully hope to win.

What lies beneath the unhappiness over Covid resurgence in S'pore?

Opinion | ‘Work Unites All of Us’: The Dignity of Labor