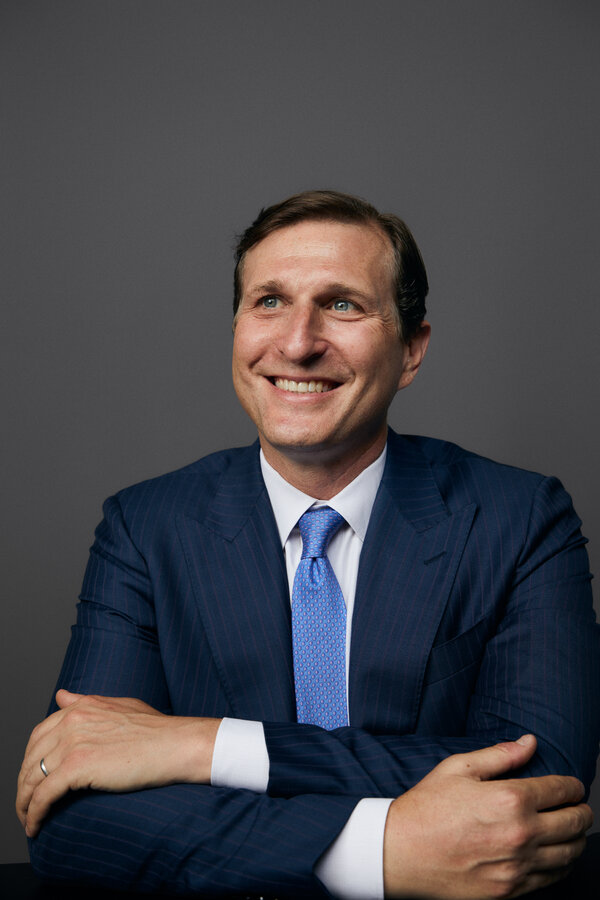 By The Editorial Board

The editorial board is a group of opinion journalists whose views are informed by expertise, research, debate and certain longstanding values. It is separate from the newsroom.

Dan Goldman, a former assistant U.S. attorney for the Southern District of New York, was the chief investigator in the first impeachment of President Donald Trump.

This interview with Mr. Goldman was conducted by the editorial board of The New York Times on July 27.

Kathleen Kingsbury: What would you be able to accomplish in a Republican-controlled Congress? If you could, be as specific as possible.

Kathleen Kingsbury: But also, is there one big idea that you’d pursue with bipartisan support?

Yeah. I think in the unlikely event that it will be a Republican Congress, I actually think that my skills and experience are going to be even more valuable to the caucus. Because we can fully expect a Biden impeachment. We can expect a select committee to investigate Hunter Biden.

The Republicans are out for blood and out for revenge. And so my experience, having led the impeachment investigation and being right in the throes of that kind of complex and high-stakes investigation, will be even more valuable, I think, to the Democratic caucus than reasonably a first-year Congress person would be even in the majority without any seniority.

As for what I think we can achieve in a bipartisan way, look, my approach to this is sort of twofold. I think on the one hand, we need to be really aggressive in attacking the Republicans and attacking our policy prerogatives. We need to defend our democracy, which is under attack. We need to defend and protect our fundamental rights.

We are dealing with a very different Republican Party today than even 10 years ago. And so what we have to recognize is there are bad-faith actors, in my view, who are trying to sabotage anything the Democrats do in order to acquire power of their own. So the old traditional way of negotiating with them or going directly to them and begging them or having a meal with them or whatever, it’s not working. What we are going to have to do is convince them that it is in their self-interest to do something.

And I think there are two ways of doing that. One is aggressively investigating, and using the investigative and oversight powers to change the hearts and minds of the public, as we’ve seen a little bit with the Jan. 6 committee, or to expose their special interests or their — the folks, the lobbyists or the other special interest group that control them. And the other way is to figure out a way of reframing an issue so that they can recognize that it is in their self-interest to do it.

And I’ll give you an example of each real quick. Actually, it happened today. A few weeks ago I called for an investigation into gun manufacturers and gun dealers, so that we can know what they’re marketing and advertising, whether it is they knowingly were targeting young adults with radicalizing on social media and trying to sell a AR-15s. There’s, I think, a lot there not dissimilar to the tobacco companies or the opioid companies who knew what they were selling was addictive.

There is a path there to expose the gun lobby and the gun manufacturers, which is really the only way to impact the Republicans. Because 70 percent, 80 percent of the country believes in much stricter gun legislation than we have. So that’s a way, I think, we can use investigations and oversight.

[In a recent Gallup poll, 66 percent of people said gun-control laws “should be made more strict.”]

On the other hand, I look at renewable energy as one thing that we might be able to figure out a creative compromise for — not dissimilar to mass incarceration, where Democrats pushed for it for a long time, Republicans resisted it because of their tough-on-crime stance. Ultimately, Republicans got onboard with decarceration because of the fiscal benefits. And so you first started seeing it in states, and then you saw it with the First Step Act.

I think we can do something similar with renewable energy, which Democrats — we want for climate purposes, for job purposes. But we hear a lot from Republicans about energy independence now, with gas prices going up and with the issues in Russia and Ukraine in terms of oil and natural gas and our dependence on the Middle East. The best way to be energy independent is to invest in renewable energy that we create here. And so I think there’s an avenue that, in the minority even, I think we could pursue some sort of climate legislation that would be — we could agree on for very different reasons.

Mara Gay: OK, thank you. What would you do in Congress to help build more new housing in New York so that New Yorkers can stay in the city that they love?

I think we need to do two things in terms of housing. One is we need more money for NYCHA so that we can fix these dreadfully maintained buildings. I met with the tenants association at the Jacob Riis Houses a couple of weeks ago and it was really, really unacceptable conditions. So we have to figure out a way to repair that.

I am open — I support the preservation trust. I am open to creative ways of providing some sort of funding streams so that we can fix NYCHA. But the bigger issue I think you’re hitting on is we need more and we need better housing. I would work very hard to increase the number of Section 8 vouchers, especially for the homeless, which are often — it’s often undesirable for some of the affordable housing or transitional housing places to take the homeless. But I think we need to be pushing for more Section 8 vouchers.

I think we need to be funding nonprofits that focus on this, on homelessness and housing, much, much more. Because they’re really in the sort of nexus between some of the for-profit real estate developers and the city. And so what is starting to happen more, and I’m a big fan of, is that you have for-profit companies that are providing some capital for more housing. But they can’t really get that last 25 percent of the way.

Scout24 in talks to sell AutoScout24 to Hellman & Friedman

Opinion | Remembering the Poor on Christmas