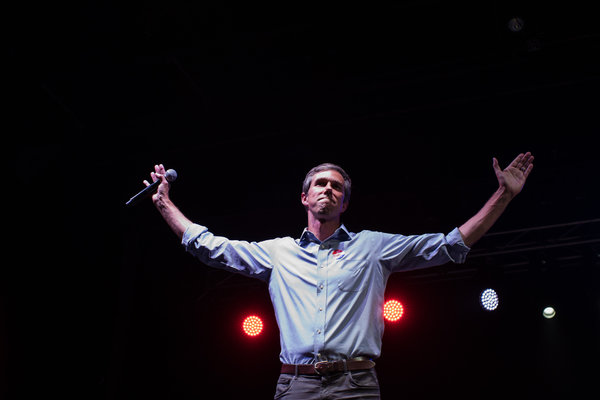 HOUSTON — The condolence emails are already coming in, from New York, and California, and from my neighbors down the street, who are mostly limiting themselves to unprintable but predictable four-letter words. Yes, Beto O’Rourke lost to Ted Cruz, 51-48 percent, an outcome that surprised almost no seasoned politicos around these parts — they’ve been predicting it for months, some since the congressman from El Paso first announced his candidacy last year. Rest assured that the Monday-morning quarterbacking will proceed apace starting … now.

In fact, it kind of started last Sunday, Nov. 4, with a lengthy critique in Politico that quoted mostly Republican operatives — Karl Rove, back from the dead — who cited Mr. O’Rourke’s failure to tack toward the middle, instead doing crazy things (in Texas, at least) like supporting the N.F.L. players who took a knee to protest police brutality. “Did Beto Blow It?” was the pre-emptory headline.

There will be a lot more reasons given for why Mr. O’Rourke lost: Some experts will suggest old ideas, stressing the power of the incumbency, and others newer ideas, as in, Mr. O’Rourke spent too much time on social media encouraging the same like-minded folks to keep talking to one another. People will say that the campaign was disorganized, more focused on the candidate’s winning personality than real issues. That Mr. O’Rourke let Mr. Cruz define him, instead of the opposite — and Mr. Cruz did just that, painting Mr. O’Rourke as a far-left-wing nut who would let terrorists cross the Rio Grande and endanger the lives of God-fearing Texans. Whenever I heard Mr. Cruz opine that Mr. O’Rourke was just wrong for Texas, my stomach would lurch a little.

But before all of Mr. O’Rourke’s errors are carved in stone in the next few hours, maybe it’s worth taking a minute to say that, whatever his flaws, Mr. O’Rourke came very close to defeating a powerful incumbent — O.K., not one who was exactly beloved — and he did it pretty much as he promised, without going negative and by raising a whole bunch of money without the help of PACs or fancy political consultants. (The early fears that Mr. O’Rourke would be eclipsed by Mr. Cruz’s millions in dark money never materialized; Mr. Cruz raised $40 million to Mr. O’Rourke’s $70 million.)

He was the first Democratic candidate in a very long time to engage new voters in Texas — women, young people, people of color — many of whom who had given up on the political process. Yesterday, my 52-year-old Uber driver showed me his first-ever voter registration, and asked me what he had to do to cast his vote.

He was a large man whose arms were covered in homemade tattoos, and he spent most of his days — when he wasn’t working — taking care of his mother, a legal immigrant from Mexico who was terrified that somehow she would be deported. He’d never voted before, but now he wanted to — “for Beto,” he kept repeating, like an incantation. I saw the same passion in a sacker at my grocery store, and in countless others who organized and knocked on doors and wrote checks because they had finally found a Texas candidate who gave them something to be for instead of against. Who made them feel they mattered.

Maybe this was a failed campaign to the experts, but for a lot of people, myself included, there was a lot of good in it: a chance to see the Texas I’ve always known was there — a place where working people and immigrants still have the right to thrive alongside those with much more; a place where we aren’t so devastatingly divided; a place where people are energized by the political process because they saw a way to make a difference. Mr. O’Rourke gave Texans who have long felt disenfranchised a glimpse of what could be, and I hope they don’t take his defeat as a sign that victory is beyond their grasp.

It wasn’t all for nothing: The enthusiasm for Mr. O’Rourke most likely helped less glamorous and less moneyed candidates win down the ballot. The youthful attorney Lizzie Pannill Fletcher beat the self-satisfied Republican Congressman John Culberson, who had represented West Houston since 2001. In North Dallas, the Democrat Colin Allred, a black former N.F.L. player and civil rights attorney, defeated the Republican Pete Sessions, who had held office for 22 years, was chairman of the House Rules Committee and had sworn vengeance on Obamacare. Maria Teresa Kumar, the president of Voto Latino, which mobilizes Latino voters, tonight said that her organizations saw a 500 percent increase in registration among young Latino voters in Texas, the state that previously had the lowest voter participation of all.

It’s also true that many of the same politicos who had been hanging crepe for Mr. O’Rourke for months now suggest that, for him, this is the beginning, not the end. Most likely he will run for the Senate again in 2020, this time against the Republican who decides to run for the seat John Cornyn is expected to vacate. Most Texans know that when you fall off a horse, the best thing to do is get right back on again.

Mimi Swartz, an executive editor at Texas Monthly, is a contributing opinion writer.

Opinion | When Telemedicine Works, and When It Doesn’t

Opinion | Going From ‘Hello’ to ‘Bonjour’: The Path to Another Language