For our purposes, the “joke” is President Trump’s ongoing fight to overturn the election results and hold on to power against the wishes of most Americans, including those in enough states to equal far more than the 270 electoral votes required to win the White House.

“#OVERTURN,” he said on Twitter this week, adding in a separate post that “If somebody cheated in the Election, which the Democrats did, why wouldn’t the Election be immediately overturned? How can a Country be run like this?”

Unfortunately for Trump, and fortunately for the country, he has not been able to bend reality to his desires. Key election officials and federal judges have refused his call to throw out votes, create chaos and clear a path for the autogolpe he hopes to accomplish. The military has also made clear where it stands. “We do not take an oath to a king or a queen, a tyrant or a dictator. We do not take an oath to an individual,” Gen. Mark A. Milley, chairman of the Joint Chiefs of Staff, said in a speech not long after the election.

But there are others who — out of partisanship, opportunism or a simple taste for mayhem — have chosen to support the president’s attack on American democracy. They refuse to acknowledge the president’s defeat, back lawsuits to throw out the results, and spread lies about voter fraud and election malfeasance to Republican voters. They are laughing at Trump’s joke, not realizing (or not caring) that their laughter is infectious.

What was a legal effort by the Trump campaign, for instance, is now one by the state of Texas, which has petitioned the Supreme Court to scrap election results in Georgia, Michigan, Pennsylvania and Wisconsin, depriving Biden of his victory. Filed by Ken Paxton, Texas’s attorney general, the suit says it would be a violation of due process to accept the outcome in those states, on account of “election irregularities” and “interstate differences in the treatment of voters” that disadvantage Republican voters in areas with stricter voting rules.

This lawsuit rests on the novel argument that the Constitution gives exclusive and unquestioned authority to state legislatures to appoint presidential electors as they see fit and renders any action to expand voting without direct legislative consent unconstitutional. The Supreme Court already rejected that argument once this week when it turned away a similar lawsuit by the Trump campaign to overturn the results in Pennsylvania.

Regardless, on Wednesday, 17 Republican attorneys general filed a brief in support of Texas, urging the court, in essence, to cancel the election and hand power back to Trump. “Encroachments on the authority of state Legislatures by other state actors violate the separation of powers and threaten individual liberty,” reads the brief, which also claims that “States have a strong interest in ensuring that the votes of their own citizens are not diluted by the unconstitutional administration of elections in other States.” The next day, more than 100 Republican members of Congress filed a brief in support of this lawsuit, in effect declaring allegiance to Trump over the Constitution and urging the court to end self-government in the name of “the Framers.” 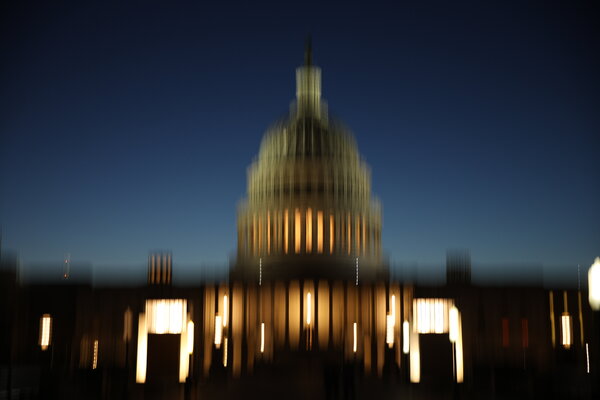 There’s a paradox here. This sloppy, harebrained lawsuit has no serious chance of success. Granting Texas (and, by extension Trump, who joined the lawsuit) its relief would plunge the country into abject chaos, with violence sure to follow. That this quest is quixotic is, in all likelihood, one reason it has so much support. It is only with the knowledge of certain defeat that Republican officeholders feel comfortable plowing forward with an effort that would tear the United States apart if it succeeded. They can play politics with constitutional government (Paxton, for instance, hopes to succeed Greg Abbott as governor of Texas) knowing that the Supreme Court isn’t going to risk it all for Donald Trump.

Then again, it was only two weeks before Election Day that four of the court’s conservatives announced their potential willingness to throw out votes on the basis of this theory of state legislative supremacy over electoral votes. It is very easy to imagine a world in which the election was a little closer, where the outcome came down to one state instead of three or four, and the court’s conservatives could use the conflict over a narrow margin to hand the president a second term.

With no evidence that Republicans have really thought about the implications of a victory in the courts, I think we can say that these briefs and lawsuits are part of a performance, where the game is not to break kayfabe (the conceit, in professional wrestling, that what is fake is real). Still, we’ve learned something from this game, in the same way we learn something about an audience when it laughs.

We have learned that the Republican Party, or much of it, has abandoned whatever commitment to electoral democracy it had to begin with. That it views defeat on its face as illegitimate, a product of fraud concocted by opponents who don’t deserve to rule. That it is fully the party of minority rule, committed to the idea that a vote doesn’t count if it isn’t for its candidates, and that if democracy won’t serve its partisan and ideological interests, then so much for democracy.

None of this is new — there is a whole tradition of reactionary, counter-majoritarian thought in American politics to which the conservative movement is heir — but it is the first time since the 1850s that these ideas have nearly captured an entire political party. And while the future is unwritten, the events of the past month make me worry that we’re following a script the climax of which requires a disaster.

Opinion | The Crisis of the Republican Party