Almost nine years ago, in early December, I took my younger daughter, Phoebe, to Disney World to celebrate her fifth birthday.

If you’ve never been to the happiest place on earth around Christmas, you need to know two things. First: the entire place, from Adventureland to Epcot, is garlanded in Christmas wreaths and Christmas lights, a wonderland of green and red with Mickey and Minnie dressed as Santa and Mrs. Claus.

The other thing you need to know is that Disney personnel refer to any female-presenting young person as “princess.”

So there we were, in the Bibbidi Bobbidi Boutique, where parents pay hundreds of dollars for the privilege of getting their kids “princess makeovers,” and Phoebe’s “fairy godmother in training” gave her a manicure and made small talk, asking, “Did you make your list for Santa yet, Princess?”

I waited to see how my daughter would respond. I watched her think. Finally, Phoebe said: “I do not make a list for Santa. Because I am a Jewish princess.”

I laughed and laughed. Then I explained to her that a Jewish Princess is something else entirely. It was hilarious. But that trip was also her first introduction to a lesson she will learn, over and over, in a thousand ways large and small: that she is different, that she’s the other, and always will be.

I think about that day when I hear Donald Trump and his supporters talk about the “war on Christmas” (there isn’t one), or brag that “we’re saying Merry Christmas again” (“we” never stopped).

I thought about it again when I read the obituary for Justice Ruth Bader Ginsburg in The Guardian. Without offering any proof, the obituary asserted that Justice Ginsburg had “abandoned her religion” at 17, when she found herself excluded because of her gender from the minyan, or group of 10 observant Jews, who said the prayer for the dead for her mother. 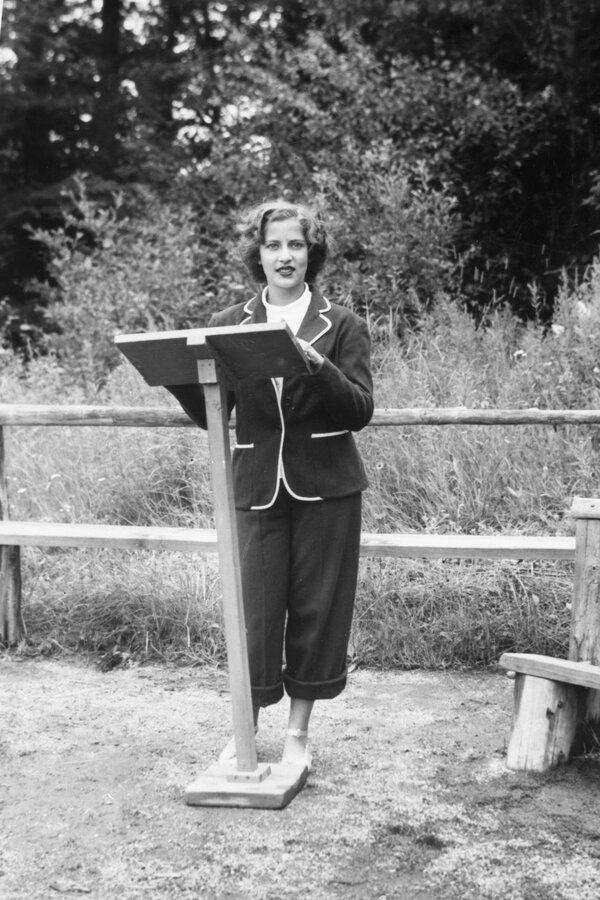 American Jews were quick to push back against the newspaper. R.B.G. attended services — at least, occasionally. She spoke openly and proudly about her Judaism. She kept a mezuza, or a prayer scroll, on the door of her chambers, and an Old Testament quotation on her wall. After an outpouring of complaints, The Guardian adjusted the article’s language to say that although the justice “moved away from strict religious observance” she “nevertheless remained deeply committed to her Jewish identity.”

I can’t answer for R.B.G. But most Jews will tell you that a Jewish identity has little to do with whether you keep kosher or attend services every Friday, and everything to do with your culture, your ethnicity; with the way you see the world and the way the world sees you. It is an identity we can’t slip, even if we want to.

From what I can tell, Ruth Bader Ginsburg didn’t want to. She might not have been a regular at synagogue or at Sisterhood meetings, but she lived a Jewish life.

She was, for starters, a mensch, a boss who treated her clerks like family, serving them birthday cakes (that her husband baked) and helping them find partners. A piece of Jewish lore holds that a Jew who makes three successful matches automatically ascends to the highest level of heaven. I’d give the justice extra credit for not just making those matches but officiating at some of their marriages.

Jewish values run through her writings like a shining thread. If you’ve been excluded, you fight for inclusion. If you’ve been made to feel less-than, because of your gender or your sexual orientation or your race or your religion, you stand up for others who’ve been denied a seat at the table. The notion of tikkun olam, that the world is broken and that each of us has a role in its repair, is a value that would lead someone to a life like hers. It is a value that overlaps with the highest American ideals.

As a woman, as a feminist, as the mother of daughters, as a Jew, I am devastated that we won’t have Justice Ginsburg as our advocate and role model. In the days of Presidents Bill Clinton and Barack Obama, her presence on the bench was a symbol of progress, a crucial step in the right direction. In the days of Donald Trump — an era that has brought us rising incidents of anti-Semitism, and the Tree of Life massacre — she was a bulwark.

She was also a living, breathing rebuke to a president who saw “very fine people” on both sides of a white-power rally where one side chanted “Jews will not replace us” — a president who has allegedly complained about Jewish clannishness and ingratitude for everything he’s done for Israel, which, by the way, is the country to which he seems to think our primary allegiance lies.

I haven’t become significantly more observant in the last four years. But I have never felt more Jewish. The rise in anti-Semitism, the torrents of toxic online abuse directed toward Jewish women, the idea that Jews are not “really” Americans — all of it has only rooted me more deeply in my faith and my identity, and made me more committed to Jewish values.

In this terrible year of so much sorrow, losing Ruth Bader Ginsburg — and losing her on the eve of Rosh Hashana, at the start of the High Holy Days, at the end of an old year and on the cusp of a new one — felt especially painful. It’s hard not to give into the despair of worst-case scenarios: that Mr. Trump will lie about the election results, that his Republican enablers will cheer him on, that our democracy will die, not in darkness, but at the Supreme Court.

But I remember the words from the Torah exhortation framed on Justice Ginsburg’s wall and woven into one of her lace jabots: Justice, justice, shall you pursue. And another Jewish teaching that she must have known, which says, “You are not obligated to complete the work, but neither are you free to desist from it.”

Giving up is a luxury that none of us can permit ourselves. It is the last thing the Notorious R.B.G. would want — and the least Jewish thing we could do.

Jennifer Weiner (@jenniferweiner) is a contributing opinion writer and the author, most recently, of the novel “Big Summer.”

Gerard O'Regan: 'The past is a different country – Ireland has belief to stand up for itself now'

Rory Hearne: 'Some serious political noise needs to be made if our dysfunctional housing system is to be fixed'

Gerard O'Regan: 'Expensive childcare takes an emotional toll on the parents battling to get by'