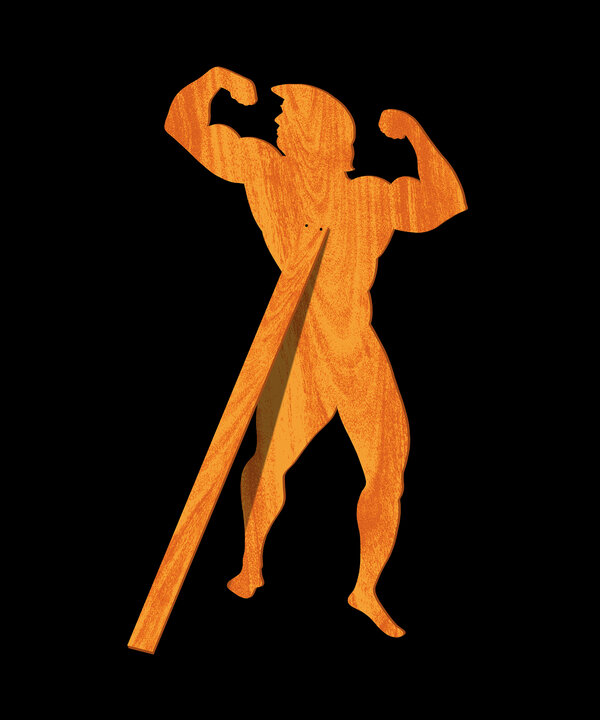 Great article on President Trump’s brand of masculinity. I am befuddled by the idea that Mr. Trump is a throwback to some swaggering tough-as-nails military commander. He’s more like an aging, shuffling Pillsbury Doughboy. Tough as nails? Fingernails, perhaps. I’d be shocked if he could run a mile. He prefers to watch TV and tweet.

Vintage machismo required the manly man to actually be able to climb a cliff, dig a trench, catch a thief, rescue the girl or at least look sharp in a suit. In the so-called good old days we liked our young bucks buff and lusty and touchingly sweet to the girls; our aging manly men were gruff but also generous and wise, ideally with some gravitas thrown in for good measure.

Mr. Trump’s version of manhood is not so much a throwback to the “real manly man” as it is a validation of a lazy man’s version of manliness. Buff is too much trouble. Lusty slips to lecherous. Instead of gravitas we get pomposity. Mr. Trump’s manliness is a version embraced by the couch potato bully. This is not a new performative masculinity; it’s as old as the hills.

As Ms. Faludi says, it doesn’t so much matter if this is an old or new model of manliness; what matters is that we see it as a poor model. Our men are — and can be — better than this.

I read with concern about what is happening to the National Oceanic and Atmospheric Administration.

In the late 1970s and early 1980s, I served as assistant administrator for policy and planning of that agency and also as the director of the National Climate Program. We issued a series of reports, as required by law. We warned then about climate change and the effect of energy and other activities on our oceans and atmosphere.

The policy office and then the agency also warned about the politicization of science and weather forecasting and about environmental effects, like acid rain and marine pollution from offshore drilling. We did this because of the nuclear disaster at Three Mile Island and the potential misuse by other countries of weather satellites.

All of these reports and comments were during both the Carter and Reagan administrations and were considered uncontroversial.

President Ronald Reagan appointed as administrator an academic who later became the president of a university. He appointed a deputy administrator who was a longtime government official from NASA.

The bottom line is that NOAA has until now not been politicized.

Martin H. Belsky
Akron, Ohio
The writer is a law professor at the University of Akron.

‘The World Needs Us’

Re “How America Helped Defeat the Coronavirus* (*Just Not in the United States)” (Opinion video, Oct. 28):

While watching this inspiring video, I felt something that I have not felt in some time — pride in America. How wonderful it was to be reminded that there was a time (not so very long ago) when our country was widely recognized as a force for good in the world, a leader in scientific discovery and innovation, and an indispensable member of the global community.

May we return to fulfilling these essential roles in the very near future. I believe that the world needs us.

Opinion | Our Days Have Always Been Running Out

Opinion | The Integrity of William Barr