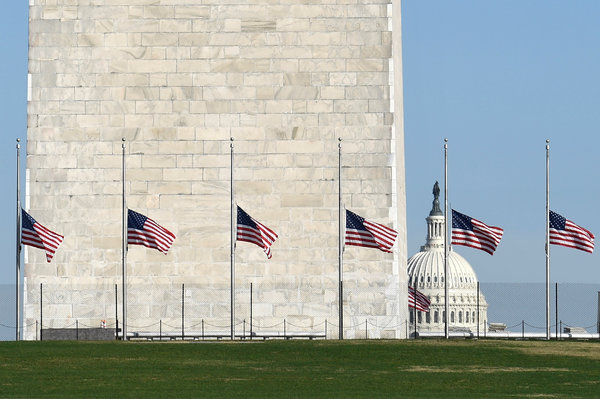 This is what it’s come to — there are now Americans who have lived through two gun massacres. Many of the people who were able to flee a California bar where a man shot dozens of people late Wednesday night had also survived an attack last year in which a gunman in a Las Vegas hotel fired down on a music festival, killing 58 people. But at least one of the Las Vegas survivors was among the dead at the bar.

The gunman on Wednesday opened fire in a crowded country-music bar, a popular hangout for local college students. He shot a security guard first and killed at least 12 people, including a sheriff’s deputy who responded to the attack. More than 20 were believed to have been wounded.

The carnage came just 11 days after the fatal shooting of 11 worshipers at synagogue in Pittsburgh, nine months after 17 people were gunned down at a high school in Parkland, Fla., one year after 26 were killed in a shooting spree at a church in Sutherland, Tex., and 13 months after the massacre in Las Vegas.

Americans are watching — and now some are even experiencing — versions of this same horror over and over, hoping that someone will eventually figure out how to break the cycle. Could that hero be President Trump and the House Democrats?

This latest atrocity took place the day after an election that gave Democrats control of one chamber of Congress. Addressing the new political landscape on Wednesday, both President Trump and the House Democratic leader, Nancy Pelosi, emphasized how ready they were to cooperate on matters of shared concern. Ms. Pelosi said Democrats “have a responsibility to seek common ground where we can,” while Mr. Trump expressed enthusiasm for working in “a beautiful bipartisan-type situation.”

If Ms. Pelosi and Mr. Trump are sincere about coming together to fix problems the public cares about, there seems hardly a more pressing place to start than reducing gun violence.

This would not require much of a shift for Democrats. Ms. Pelosi had already planned an early push to tighten background checks for gun purchases — a move favored by a vast majority of Americans, including most National Rifle Association members. Other popular measures previously introduced in Congress, like raising the minimum purchase age to 21 from 18 or banning bump stocks, which convert guns to automatic weapons, could be revisited as well.

For his part, Mr. Trump has been erratic on the subject of gun safety. In February, post-Parkland, he held a memorable meeting with lawmakers at which he voiced support for a “comprehensive” package that included “powerful” background checks. He called for raising the minimum age for purchasing rifles, seemed open to a Democratic plan to ban assault weapons, and slammed Republican lawmakers for being “afraid of the N.R.A.”

When that upset the N.R.A., the president backpedaled. But clearly the impulse to do more lies somewhere inside of him, perhaps waiting for the right political moment to arise.

In Tuesday’s election results, there’s evidence that the moment is now. Dozens of candidates supported by gun-safety groups carried the day in states including Texas, Kansas, Colorado, Pennsylvania and Virginia. In Georgia’s typically Republican Sixth District, the Democrat, Lucy McBath, whose teenage son was fatally shot in 2012, won on a platform of combating gun violence. Washington State voters approved a ballot initiative aimed at imposing some of the strictest gun laws in the nation. Exit polling found that 60 percent of voters nationwide support tougher gun laws, while opposition hovers in the mid 30s.

This is not to say that this issue is no longer a core element in the endless red-blue culture war. And the N.R.A., which remains a rich, powerful force in our political system, certainly intends to keep it that way.

But Mr. Trump is the ideal president to tackle the issue. He enjoys the adoration of his party’s culturally conservative base to a degree few politicians even approach. If inclined, he could burn just a small fraction of that capital on promoting some of the common-sense gun measures desired by a majority of the electorate.

Better still, since Mr. Trump has a taste for combat and prides himself on shaking things up, what could be more disruptive than pressuring lawmakers to grow a spine and attack gun violence?

As legacies go, Mr. Trump — and Ms. Pelosi and her colleagues — could do far worse.

Opinion | The Less Trump Pays for Jan. 6, the More It Costs Us