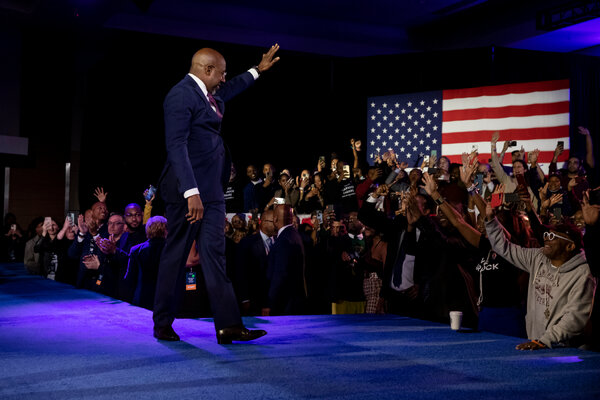 The last Senate runoffs in Georgia fell on the 5th of January, 2021, which meant they were immediately overridden in the nation’s imagination by the events of Jan. 6. But everything that’s happened since has somehow brought us back around to where we stood just before the riot at the U.S. Capitol, with yet another Georgia runoff providing yet another case study in why the Republican Party desperately needs to move on from Donald Trump.

In the case of the previous runoffs, Trump’s influence on the outcome was flagrant and direct: He made the entire pre-runoff period a stage for his election-fraud dramatics, pushing the Republican Senate candidates, Kelly Loeffler and David Perdue, into attacks on the integrity of the elections they were trying to win. And he almost certainly dampened Republican turnout with his suggestion that the fix was in — a suggestion amplified by his more lunatic allies, who discouraged Republican voting outright.

This time around the Trumpian influence was a little more indirect, but still important. He publicly encouraged his old U.S.F.L. pal Herschel Walker to run for Senate and helped to clear the field with his endorsement, ensuring that the G.O.P. would have a hapless, incompetent and morally suspect candidate in one of the year’s most important Senate races. And then he forced Walker to stagger through the runoff against Raphael Warnock in the shadow of Trump’s own low-energy campaign announcement, which was succeeded by Trump’s dinner with anti-Semites, which was succeeded by Trump’s call to suspend the Constitution in order to restore him to the presidency.

All of this predictably helped make the runoff a fractal of the larger 2022 pattern: Under Trump’s influence, with Trump’s preferred candidates, the Republican Party first sacrificed a potential Senate majority and then sacrificed one more Senate seat for good measure.

The natural question evoked by the memory of the last runoffs, though, is whether this will make any long-term difference inside the G.O.P. If Republican voters didn’t tire of Trump after he gave away a winnable election and then inspired a mob to storm the Capitol the very next day, why would merely giving away another runoff be a deal-breaker? If Trump somehow managed to remain the 2024 front-runner after the insanity of 2021’s Jan. 6, why would his loyalists abandon him after the mere political disappointments of 2022’s Nov. 8 and Dec. 6?

One answer is that the truest loyalists won’t; there will be a strong Trump vote in any imaginable Republican primary where he doesn’t drop out early. But for the Republicans who aren’t the deepest loyalists — the ones who didn’t vote for Trump in the early primaries of 2016, the ones giving Ron DeSantis leads here and there in early primary polling — there are two reasons to suspect that this runoff’s aftermath will be different than the last one’s.

The first is just the compounding effect of multiple defeats. Like a miracle sports team, the ’69 Mets or this year’s Moroccan World Cup soccer squad, Trump earned himself a storehouse of belief with his stunning upset in 2016. That the Republican Party then lost the House in 2018 — well, that was to be expected, since incumbent parties generally struggle in the midterms. That the G.O.P. lost the presidency in 2020 — well, there was a plague, mass protests, rejiggered election rules and a general atmosphere of craziness, and anyway the polls were wrong and Trump almost pulled it out in the Electoral College, the miracle juice still there but just not quite enough.

But to disappoint again in 2022, in a context where many Republicans expected to do extremely well — and more, to have so many of Trump’s preferred candidates flop while less other Republicans won easily — well, at a certain point the memory of 2016 fades, and the storehouse of faith and good will is depleted. At a certain point even a potent demagogue needs to post some actual wins to hold his coalition together. At a certain point — maybe it isn’t here yet, but it’s closer — the leader who loses just starts to look like, well, a loser.

The second reason this time might be different is that there will be time for the defeat’s reality and lessons to sink in, for the stink of loserdom to circulate — whereas last time Trump was actually helped in his bid to hold onto influence and power by the way the Georgia results vanished into the smoke of the Capitol riot.

Yes, there was a brief moment where his obvious culpability in the mob’s behavior weakened him dramatically, leaving him potentially vulnerable to a concerted push from congressional Republicans. But when that push didn’t come, when the G.O.P. leadership took the cautious (in the case of Mitch McConnell) or craven (in the case of Kevin McCarthy) way instead, their decisions helped to rebuild Trump’s relevance and power.

And so did the peculiar nature of Jan. 6 itself, which despite the best efforts of its media interpreters was always destined to be an unstable signifier — a deathly serious insurrection from one vantage point, but from another a more absurd affair, defined more by the spectacle of the QAnon Shaman roaming the Senate floor than by the threat of an actual coup d’état. However shameful some of the spin that Trump defenders settled on to explain away the day’s violence, they had material to work with in the sheer strangeness of the riot, which in a polarized atmosphere inevitably yielded to warring interpretations of its meaning.

Whereas stark election defeats, while less serious and less extreme than a violent disruption of the Senate’s business, are also harder to reinterpret in ways that make your own side out to be martyrs rather than just losers.

Trump’s election fraud narrative managed that kind of reinterpretation once. But if Trump has to run in 2024 against DeSantis, he’ll be facing a rival who won’t need to reinterpret defeats as stolen victories, because he himself won easily when Walker and so many other Trumpian picks and allies lost. And the old rule that if you’re explaining, you’re losing, may apply especially to a situation where Trump has to explain to primary voters why the winning he promised them turned into so many unnecessary defeats.