I think I can now take some time off from the U.S. political crisis to talk about events elsewhere. So, as the headline says, what the hell happened to Brazil?

I’m actually not talking about the recent election, in which Brazil’s voters chose someone who appears to be an actual fascist. I’m as horrified as anyone else. However, I have no knowledge whatsoever of Brazilian politics. On the other hand, the backdrop to that election was Brazil’s extraordinary economic crisis of 2015-16: A nation that had been on an upward trajectory, that seemed to have shaken off the legacy of instability, suffered a terrible recession and is experiencing a very slow recovery. And macroeconomics is a subject I’m supposed to know something about.

So what happened? There has been surprisingly little international discussion of the Brazilian experience, even though it was very severe and Brazil is a pretty big economy (GDP at purchasing power parity about 10 times as large as Greece.) Maybe we’re all too distracted by the political crisis in the West — Trump, Brexit, etc. Anyway, I’ve been trying to put together a story of the Brazilian crisis, well aware that I may well be missing important aspects.

Here’s what it looks like to me: Brazil appears to have been hit by a perfect storm of bad luck and bad policy, with three main aspects. First, the global environment deteriorated sharply, with plunging prices for the commodity exports still crucial to the Brazilian economy. Second, domestic private spending also plunged, maybe because of an excessive buildup of debt. Third, policy, instead of fighting the slump, exacerbated it, with fiscal austerity and monetary tightening even as the economy was headed down.

Maybe the first thing to say about Brazil’s crisis is what it wasn’t. Over the past few decades those who follow international macroeconomics have grown more or less accustomed to “sudden stop” crises in which investors abruptly turn on a country they’ve loved not wisely but too well. That was the story of the Mexican crisis of 1994-5, the Asian crises of 1997-9, and, in important ways, the crisis of southern Europe after 2009. It’s also what we seem to be seeing in Turkey and Argentina now.

But while you might have assumed that Brazil was a similar case — its 9 percent decline in real GDP per capita is comparable to that of sudden-stop crises of the past — it turns out that it isn’t. Brazil does not, it turns out, have a lot of debt in foreign currency, and currency effects on balance sheets don’t seem to be an important part of the story. What happened instead?

First of all, the global economic environment took a big turn for the worse. Brazil has diversified somewhat into manufactures, but it’s still heavily dependent on commodity exports, whose prices have plunged. As Figure 1 shows, Brazil’s terms of trade — the ratio of export to import prices — took a major hit. 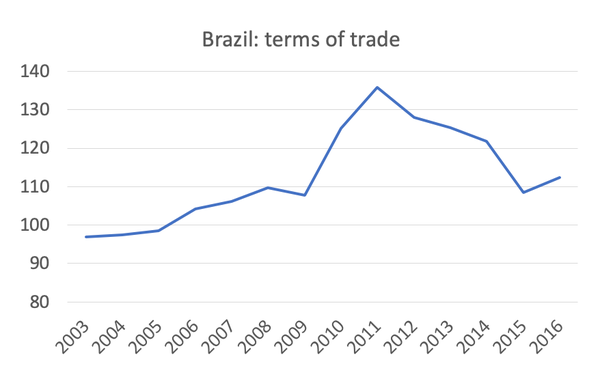 This would have been nasty in any case. But it went along with a sharp fall in domestic consumer spending (Figure 2). Atif Mian and co-authors tell us that this was linked to a rise in household debt over the previous few years — that, Brazil experienced something more like the advanced-country debt deflation of 2008 than a traditional emerging-market crisis.

What really did Brazil’s economy in, however, was the way it responded to these shocks: with fiscal and monetary policy that made things much worse.

On the fiscal side: Brazil has big long-term solvency problems. But these require long-term solutions. What happened instead was that the Roussef government decided to impose sharp spending cuts in the middle of a slump. What were they thinking? Incredibly, it seems that they bought into the doctrine of expansionary austerity.

And on top of that, monetary policy also turned sharply contractionary, with a big rise in interest rates (Figure 3). What was that about?

As best I can figure out, what happened was that the real depreciated mainly because of that terms of trade shock, sending inflation temporarily higher (Figure 4). And the central bank panicked, fixating on the inflation issue at the expense of the real economy. Now that the currency-induced spike is over, inflation is actually low by historical standards, but the damage was done.

It’s a remarkable and depressing story. And this combination of bad luck and bad policy surely played a role in the political disaster that followed.

Paul Krugman has been an Opinion columnist since 2000 and is also a Distinguished Professor at the City University of New York Graduate Center. He won the 2008 Nobel Memorial Prize in Economic Sciences for his work on international trade and economic geography. @PaulKrugman

Opinion | There’s Only One Way to Stop Predatory Lending