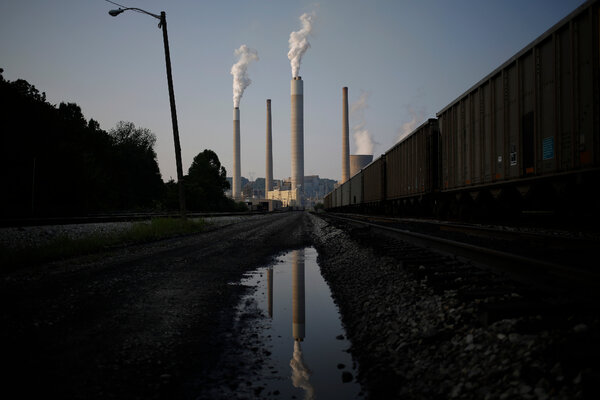 Mr. Sankar is the senior vice president of programs at EarthJustice, an environmental law group.

If you continue to harbor doubts that the Supreme Court’s conservatives are advancing an ideological agenda, the next few weeks will probably lay those to rest.

Before breaking for the summer at the end of this month, the court is likely not only to strike down or severely curtail the constitutional right to an abortion and expand gun rights but also undermine important environmental protections.

From my perspective as an environmental lawyer and a former clerk for Justice Sandra Day O’Connor, a case that looms large is West Virginia v. E.P.A., which should be decided within weeks. The justices will determine how much authority the Environmental Protection Agency has to address the climate crisis by regulating emissions of climate-warming carbon dioxide from power plants.

The Obama-era regulation at issue never went into effect because the Supreme Court’s conservatives suspended the rule. And it never will go into effect because the Biden administration is in the process of proposing a new rule. So there is no dispute to resolve yet, and thus no “case or controversy” that would support the court’s jurisdiction.

Why is the court going beyond calling balls and strikes, as Chief Justice John Roberts memorably described his role, to take a case it arguably doesn’t have jurisdiction to hear? Some of the court’s conservatives seem eager to assist polluting industries by undercutting the power of agencies to regulate in the public interest. More specifically, certain justices have signaled their interest in sharply limiting the E.P.A.’s authority to regulate greenhouse gas emissions in the West Virginia case by invoking and expanding a “major questions” doctrine. That doctrine invites unelected judges to second-guess Congress when lawmakers give an agency the authority to regulate on matters that have “major” political or economic significance.

Agencies need latitude to regulate in a world of novel problems and scientific complexity. Congress routinely gives them expansive authority through broadly-worded statutes. And Congress puts its own limits on agency discretion. Laws like the Administrative Procedure Act require that agency actions be consistent with science and informed by public input. Further, Congress has ample tools to get a wayward agency back on track: confirmation and oversight hearings, budget instructions, or even statutory amendments if necessary.

Expanding the major questions doctrine would destabilize this legislative balance and shift power to the courts. The doctrine would leave agencies with little power to tackle new and pressing environmental problems like climate change without a steady stream of statutory instructions at a degree of detail that an inexpert and political entity like Congress is unequipped to provide. Worse, the doctrine is uncertain and manipulable. Even conservative justices struggle to define what triggers a “major question” review. Virtually any environmental regulation worth issuing has “major” impacts on some industry, so the doctrine invites polluters to challenge regulations and gives sympathetic judges a potent tool for striking them down.

Brazil's BRF and Marfrig in talks to form meatpacking heavyweight