Home » Analysis & Comment » Opinion | Wonking Out: What Ukraine Needs From Us 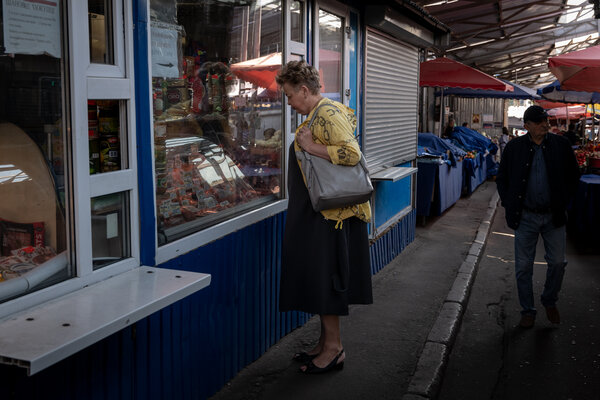 Lately I’ve been seeing what seems like a growing number of reports about Ukraine’s economic difficulties. And it definitely makes sense to focus more on the country’s economy now that the tide seems to have turned in Ukraine’s favor on the battlefield.

But it’s hard to avoid suspecting ulterior motives for that scrutiny. Supporters of Ukraine’s fight may be trying to shame Western powers into providing more aid, while “realists,” who’ve spent the whole war urging Ukraine to surrender and have been disappointed in their predictions of military defeat, are now predicting inevitable economic collapse.

Still, the economic difficulties are real and serious. According to official estimates, Ukraine’s real gross domestic product has fallen 37 percent from a year ago, although there are some signs of recovery. At the same time, inflation has surged to nearly 24 percent over the previous year.

But here’s the thing: I’ve read a lot of economic history, including the economics of wars past. And my reaction to the Ukrainian numbers is: That’s all?

And the inflation number is surprisingly low, given the circumstances. After all, quite a few countries have managed to create significantly higher inflation than that without being the target of a huge foreign invasion. Turkey, for example, currently has 80 percent annual inflation.

It’s important to note that major wars usually lead to higher inflation, with some justification.

After all, it’s unusual and, in fact, inappropriate for a government confronted with the need to make large but temporary outlays — like paying for immense military operations or, for that matter, pandemic relief — to fully pay for those outlays with higher taxes. Why inappropriate? Because even a liberal like me will admit that very high tax rates hurt incentives. So it’s better to borrow some of the needed funds and defray those costs over time.

But running a big budget deficit does increase overall demand in the economy, which is inflationary, especially if supply is simultaneously being reduced, for example by Russian missile strikes. If borrowing to cover the deficit is difficult — which it often is in wartime — some of the gap may also be covered by printing money. So it’s normal, and even acceptable, to see significant inflation in times of war.

World War II, by the way, is the exception that proves the rule. Despite gigantic budget deficits and the diversion of much of the economy’s capacity to war production, the U.S. government mostly kept a lid on inflation, partly via price controls and partly via rationing and other controls that suppressed private demand. Even then, there was a postwar spike in prices when those controls were removed.

If we look at earlier episodes, however, wars were regularly accompanied by inflation. During World War I, for example, Britain and the United States experienced inflation not far short of what Ukraine is experiencing now, even though neither was invaded:

Or look at the Civil War. The Union experienced Ukraine-like inflation. The Confederacy, whose military situation more closely resembled that of contemporary Ukraine — even though Ukraine is defending freedom, while the South was defending slavery — experienced runaway inflation:

So Ukraine is actually doing pretty well, considering. Why?

Part of the answer is that on the economic front, as in the military struggle, the Ukrainians have shown an unexpected level of coolheadedness and competence. They quickly imposed capital controls to prevent a massive flight of money from the country and also intervened to stabilize the foreign exchange value of their currency — something that isn’t always a good idea but in this case helped prevent an inflation panic.

But none of this would have mattered — just as the battlefield courage of the Ukrainians wouldn’t have mattered — were it not for the fundamental fact that Ukraine isn’t standing alone.

Here are the 2021 G.D.P.s for Ukraine, Russia and some of Ukraine’s key supporters:

On its own, Ukraine is hugely outmatched economically by Russia, which is one reason Russia appeared to have overwhelming military superiority. But the combined economic weight of the countries backing Ukraine makes the Russian economy look puny, and diverting even a small fraction of these countries’ resources to helping Ukraine utterly shifts the balance of power. This has been obvious on the battlefield, where Western weapons have changed everything. It’s also true on the economic side, where Western loans and aid are helping Ukraine contain the fallout from the military struggle.

The key question now is whether this aid, both military and financial, will be provided on a sufficient scale to ensure Ukraine’s survival and — as some of us hope — victory.

As I see it, there were four ways Vladimir Putin might have won:

First, the Russians might have succeeded in a quick decapitating strike, seizing Kyiv and overthrowing Ukraine’s government at a stroke. Indeed, they tried to do that — and, as I read in news accounts, came dangerously close to success. But they failed, and the battle of Kyiv turned into a Russian debacle.

Second, the Russians might have pulled off a World War II-style envelopment in the Donbas, encircling a large part of Ukraine’s army and then driving on to Kyiv. But they were thwarted by Ukrainian valor and stubbornness.

After that, there was still a chance that Russia would prevail through a battle of attrition, grinding down Ukraine’s army with artillery barrages until it finally broke. Things did indeed look grim for a time; we now know that there was a critical moment in June when Ukraine was effectively out of artillery ammunition.

But the arrival of Western weapons — above all, those HIMARS launchers that keep destroying Russian ammo dumps and command centers — turned the tide. (I still find it amazing how much damage appears to have been done by just 16 U.S.-supplied HIMARS launchers and 10 older systems from Britain and Germany.) At this point, Russia’s army seems more likely to break than Ukraine’s.

This leaves one remaining path to Russian victory: dwindling Western support, both military and economic. If the flow of weapons slows down, Ukraine will once again find itself outmatched. If the flow of money is insufficient (some European nations have yet to deliver much of what they promised), Ukraine’s economy will fall into crisis.

This is why Ukraine’s successful counterattack near Kharkiv matters so much. Neither the territory gained nor the losses inflicted will do much to shift the military balance. But by demonstrating their capabilities and Russian weakness, the Ukrainians are trying to refute Western officials who still don’t believe they can win, and hence keep the guns and money coming.

Opinion | The Royal Baby and Blackness as a Badge of Honor