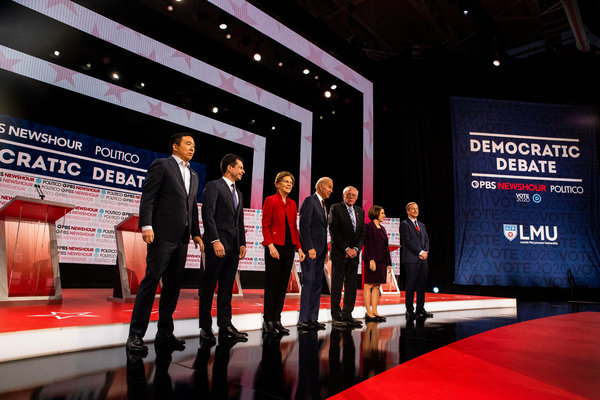 Amid all the commentary about a lack of diversity on the debate stage, can we have a little perspective? Sure, it would have been better if Cory Booker and Julián Castro had been included, but still, out of seven candidates, two are women, one is openly gay and another is Asian-American.

Judging from the Republican congressional caucus, what would we have seen in a comparable G.O.P. debate? Seven straight white men in gray suits?

Ms. Carlson should simply take her voice back.

For all the reasons she argues against nondisclosure agreements in the context of sexual harassment or assault, I would argue that NDAs are “against public policy” and “conscience shocking,” two legal criteria for declaring contract provisions void, and unenforceable by the courts.

So say whatever you want, Gretchen. Yes, Fox may sue you, but significant odds are that it will lose. Signing an NDA under these circumstances is inherently coerced.

Sally L. Ray
Seguin, Tex.
The writer is a lawyer.

Miriam O'Callaghan: 'Moment to save our planet is not next year or next month: it's now'