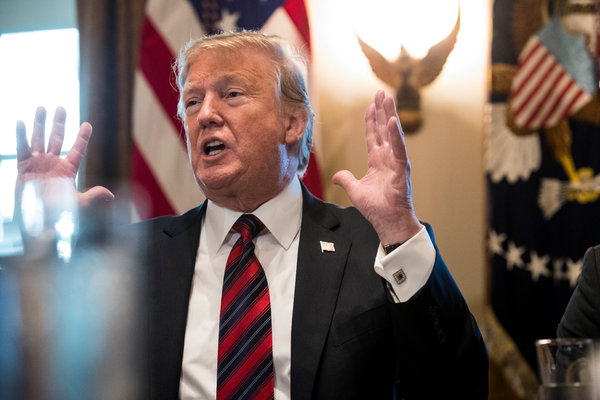 1. At midnight tonight, the partial government shutdown will become the longest in American history.

Our White House correspondents analyzed the mood in Washington.

Officially, Republicans blame Democrats. Privately, many concede, the stalemate over President Trump’s demand for a border wall has been made exponentially worse by how the White House played its cards on Capitol Hill, where two years of contradictory statements and actions have built up a profound lack of trust.

“It’s always difficult when the person you’re negotiating with changes their mind — including my wife,” said Senator John Cornyn, Republican of Texas.

2. The shutdown is being felt by Americans in widely varying ways, hitting some hard and missing others completely.

“It has been terrible,” said Andrea Caviedes, a single mother who is furloughed from the Agriculture Department. “My rent bill is due, my electric bill is due, my water bill is due, and I have medical expenses.” Ms. Caviedes, above right, serves on her church’s stage production team in her spare time.

To her friend Ximena Gumpel, it’s a blip on the nightly news: “You kind of push it aside and figure it will pass, that it’s just political bickering,” she said.

The partial shutdown is starting to affect air travel as a growing number of security agents are refusing to work for no pay. Another industry being held hostage by the shutdown: craft brewing.

3. The U.S. began withdrawing equipment from Syria — but no troops yet — as part of President Trump’s order to wind down military operations there.

Officials said the number of American troops might actually increase in Syria, to help protect the final withdrawal — an operation that is still expected to take at least four to six months. Above, a convoy of U.S. military vehicles in Syria in December.

As recently as Sunday, the White House national security adviser, John Bolton, said the pullout was conditional. Then early Friday, a vaguely worded statement from the American military headquarters in Baghdad said the withdrawal process had begun.

The surprise announcement came amid continuing confusion over plans to disengage from one of the Middle East’s most complex conflicts.

4. An 18-year-old woman who fled Saudi Arabia fearing for her life has been granted asylum in Canada, officials said.

Rahaf Mohammed Alqunun, 18, above right, had rallied support from an airport hotel room in Thailand to avoid being deported, saying she feared that her relatives might kill her.

The phenomenon of women trying to flee Saudi Arabia is not new. But the number of young women considering and taking the enormous risk appears to have grown in recent years, rights groups say, as women frustrated by social and legal constraints at home turn to social media to help plan, and sometimes document, their efforts to escape.

In Saudi Arabia, all women are required to have a male guardian, whose permission they need to get married, travel and undergo some medical procedures. “It is male guardianship that made us flee from Saudi Arabia,” said one woman who ran away as a teenager. “That is the biggest reason that the girls flee.”

5. Poland has arrested two telecommunications executives, including a Chinese employee of Huawei, and charged them with spying for Beijing.

The arrest of the Huawei employee is almost certain to escalate tensions between Western countries and China over the company, which the authorities in the United States have accused of acting as an arm of the Chinese government and making equipment designed for spying.

In December, the daughter of Huawei’s founder was arrested in Canada at the request of the U.S. It was unclear whether the arrests in Poland had been requested by the U.S., but a senior Western diplomat said the Justice Department had been working with the Polish government.

Huawei has long denied spying for the Chinese government.

5. A 13-year-old girl who disappeared the same night her parents were shot to death in rural Wisconsin was found alive, three months after their murder.

Jayme Closs, above, escaped from the home where she had been held and was found wandering on a road by a passer-by in Gordon, Wis., on Thursday afternoon. Jake Patterson, 21, was being held pending formal charges of murder and kidnapping, the authorities said, adding that “the suspect had planned his actions.”

The murder case and Jayme’s disappearance set off waves of fear and speculation around the small town of Barron and drew national attention. Jayme’s name topped the F.B.I.’s missing persons list.

7. “Our city is Latino and we bring our cultures with us from other countries.”

There are 50,000 street vendors in Los Angeles, according to official estimates, and selling on the city’s sidewalks is often the first profession for newly arrived immigrants.

But for over a century, sidewalk vending has been officially forbidden and many on the streets faced crackdowns. Now, as part of California’s push to protect undocumented immigrants, Los Angeles has legalized the trade.

One vendor told us the change acknowledged the contributions of immigrants. Follow our reporter and explore the neighborhood vendors of a changing city.

8. Did Fortnite steal the Floss?

That’s the question before a federal court reviewing complaints from three performers who say the video game used their signature dance moves without their permission.

The survival game is free to download, but players purchase add-ons as they go along, including a rotating offering of dance moves called “emotes.”

Among the moves in question are an enthusiastic arm-swinging motion that looks just like the Floss, above, created by a teenager called Backpack Kid, and a snappy number called Fresh that’s uncannily like the Carlton Dance from “The Fresh Prince of Bel-Air.”

As men leave animal agriculture for less gritty work, more ranches are being led by women — with new ideas about technology, ecology and the land. For some women, it’s about turning tradition on its head. For Native American women, it’s a return to the natural order.

“We are a matriarchal society, always have been,” said one member of the Lakota Nation.

Above, Caitlyn Taussig and her mother, Vicki Taussig, mending fences on their ranch in Kremmling, Colo.

Meanwhile, our graphic journalist talked to a bootmaker in Spring City, Utah, about what goes into a $4,500 pair of handmade boots. They take months, even years, to make.

10. Finally, we end the week with a little bit of magic.

After decades of performing on television in Ecuador, the renowned magician Olmedo Renteria — aka Olmedini El Mago — moved to New York City to make his mark. Now he showcases his talents to audiences commuting on the city’s subways.

Mr. Renteria, 78 and blind since a stroke a decade ago, usually works the subway for four hours with help from an assistant. While performing his routine, he likes to punctuate tricks by singing out the opening bars of Beethoven’s Fifth Symphony.

Have a marvelous weekend.