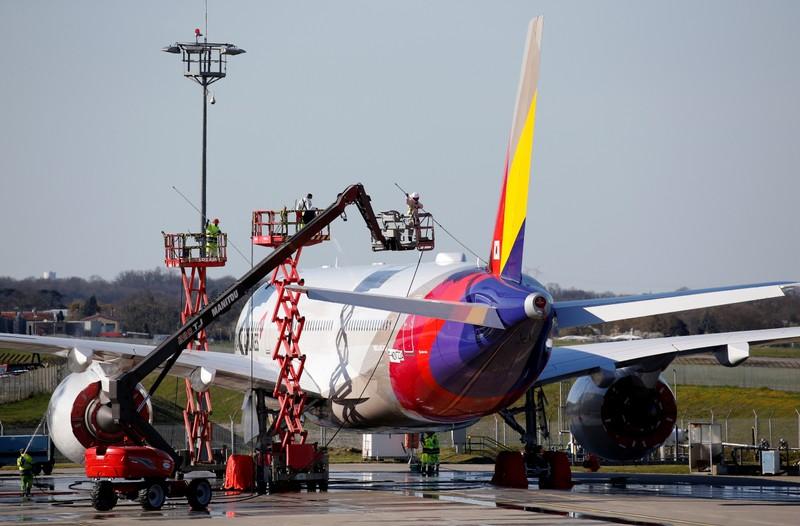 He said the fund is in talks with several local and overseas entities to form a consortium to bid for the 31.05% stake in Asiana Airlines, which has been put up for sale by top shareholder Kumho Industrial (002990.KS). The stake is worth $282 billion as of Friday’s closing price

Kang’s comment comes as the local airline industry grapples with several challenges, including rising competition from budget carriers to a U.S.-China trade war hitting cargo demand and a Korea-Japan diplomatic row hurting travel. Korean Air Lines and Asiana Airlines swung to operating losses for the April to June quarter, from a year earlier.

“I believe the entire airline industry in Korea is in crisis,” Kang said over the phone.

Shares of Asiana Airlines, South Korea’s second-largest carrier after Korean Air Lines, outperformed the broader market .KS11 and were up 2.2% in early trade.

KCGI’s possible bid came amid concerns about lack of interest in the sales of the heavily indebted Asiana Airlines, analysts say.

“There are market doubts whether the fund has the firepower (war chest) to buy into Asiana Airlines,” said Bang Min-jin, an analyst at Eugene Investment & Securities said.

In April, Kumho Industrial it would sell its entire stake in the debt-ridden carrier to keep it afloat, after the conglomerate came under pressure from creditors including state-run Korea Development Bank.

Korean’s chip-to-refinery conglomerate SK Group and retail-focused Aekyung Group, which also has a stake in budget carrier Jeju Air (089590.KS), were named as potential suitors by local media, but the two firms did not publicly say whether they were interested in the bidding or not.

KCGI has increased its stake in Hanjin Kal, the parent of Korean Air Lines, fueling market expectations about a battle to control the family-owned group following the death of patriarch Cho Yang-ho in April.

But Delta Air Lines (DAL.N), which runs a joint venture of Korean Air Lines, bought a 5.13% stake in Hanjin Kal, giving a boost to the management of South Korea’s top carrier as it seeks to thwart KCGI’s challenge.

Andrew Adonis: 'The UK must seek 21-month delay to let it build a bridge over Brexit's troubled waters'