Home » Analysis & Comment » State of the Union, the Pope, Hummingbirds: Your Wednesday Briefing 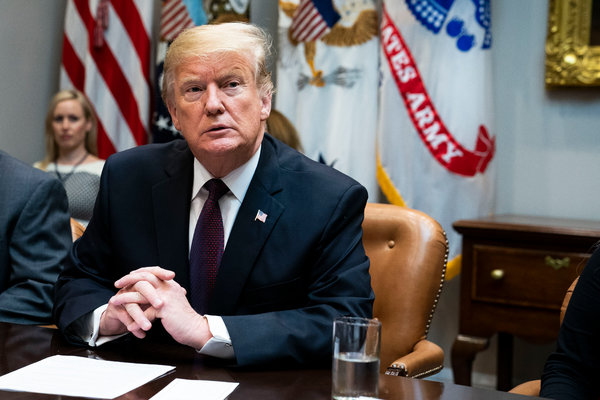 The president will deliver his second State of the Union address in the House chamber in a few hours. We’ll stream it and have a live briefing on nytimes.com.

White House officials have said Mr. Trump will use the political pulpit to call for unity in a polarized age, but the political backdrop this year is significantly different from last year. The House speaker, Nancy Pelosi, will be seated behind him, and, in front of him will be newly elected Democratic lawmakers who have been deeply critical of the president.

Here’s who else will be in the audience and how the Democratic Party plans to confront him.

What to watch for: The president will probably bring up immigration policy and possibly make another push for funding for a border wall.

He is also likely to lay out his plan for troops in Syria and Afghanistan after facing political blowback for his decision to retreat from those conflicts. He may also reveal more details of a second summit meeting with the North Korean leader, Kim Jong-un.

Other news from Washington: Federal prosecutors ordered Mr. Trump’s inaugural committee to turn over documents about donors, guests, finances and activities as part of an investigation into illegal foreign donations.

Francis celebrated Mass with about 135,000 Catholics, the largest public Christian rite in the history of the United Arab Emirates.

During a 40-hour visit, the pope pushed for greater acceptance of Christians in the Middle East, where wars, jihadist violence and sectarian tensions have reduced the proportion of Christians to 4 percent from about 20 percent before World War I. He also made an appeal to end the war in Yemen, which the U.A.E. is heavily involved in.

Watch: A clip from the pope’s homily.

Background: About 13 percent of the population of the U.A.E. are Christians who emigrated for economic opportunity. But the lives of migrants can be difficult there, with few labor protections and no real path toward citizenship, an issue that the pope raised in an earlier speech.

A surprise offer: Aboard the papal plane returning to Rome from Abu Dhabi, the pope expressed a willingness to mediate a peaceful resolution to the political crisis in Venezuela if asked by both President Nicolás Maduro and the opposition leader, Juan Guidó.

Yesterday, we told you about the alarming prospect of glaciers in the Himalayas melting by a third or more over the next 80 years.

But for millions of people from Japan to Wisconsin, ice is already vanishing closer to home. Lakes that used to routinely freeze over aren’t anymore.

Details: For the first time, scientists quantified the effects of climate change on ice cover across 1.4 million lakes in the Northern Hemisphere. They found that thousands have already been experiencing years without ice and that “an extensive loss of lake ice will occur within the next generation.”

Representatives from the insurgent group and a delegation of former Afghan officials kicked off two days of talks in Moscow aimed at ending the 18-year conflict.

Details: The talks offer a window into any future peace deal. The Taliban, which barred women from public life during their time in power, said they now respected women’s rights to education and work — a claim met with immediate skepticism in Afghanistan. One former governor who was forced from office last year urged a gradual withdrawal of foreign troops.

In Afghanistan: None of the talks have included representatives of the U.S.-backed government in Kabul. President Ashraf Ghani criticized the Moscow meeting as an attempt to undermine the authority of the Afghan state, though Afghanistan’s political elite is beginning to rally around the peace effort.

Of note: Thirty years after the Soviet Union retreated from Afghanistan, the Russian government played a quiet but major role in orchestrating this meeting, and has pointed to the U.S. military presence in the country as the main hindrance to peace.

#MeToo: A psychiatrist and nuclear disarmament activist has accused the former president of Costa Rica, Oscar Arias Sánchez, of sexually assaulting her four years ago, bringing the movement to one of Latin America’s most revered statesman.

Paris: At least 10 people were killed and 37 injured after a fire tore through an eight-story building in a residential part of the city — the deadliest in the French capital in over a decade. The fire appeared to be tied to a neighborhood dispute, and the authorities are treating it as a possible case of arson.

Islamic State: A British journalist, John Cantlie, who was abducted by the militant group in Syria in 2012 is believed to still be alive, a British official said. Since his capture, Mr. Cantlie has appeared in several online videos often delivering Islamic State propaganda, possibly under coercion, but the last one was released more than two years ago.

Japan: The finance minister apologized for saying that people who didn’t have children were to blame for the country’s declining population and social security costs.

Myanmar: The Secretariat, where the country’s independence hero, Aung San, was assassinated in 1947, will be the backdrop for a two-day night bazaar promoting ties between Myanmar and the U.S., with Krispy Kreme doughnuts and a live band from the local Hard Rock Cafe. Critics find the event insensitive.

Mindfulness: Students at hundreds of schools in Britain will start to learn relaxation techniques, breathing exercises and other methods to “help them regulate their emotions,” the government said. The new program is aimed at introducing children to the issues around mental health and happiness.

Chanel: For its most recent spring fashion show in October, the French luxury house created a beach inside the 828,220-square-foot Grand Palais, complete with real-water waves crashing on the artificial shore. It took nine days and a team of 150 people to pull the ambitious project together.

Hummingbirds: Don’t be fooled by their beautiful colors and teeny tininess. Studies have found that the birds are ferocious fighters with beaks that have evolved into dangerous weapons for male-to-male conflicts.

Marie Kondo’s methods can help you tidy, but then you have to find a way to keep the junk from creeping back.

Transportation apps relieve the frenzy of navigating an unfamiliar city. Here are a few that go beyond Google Maps and Google Translate.

Anne is remembered today mostly for her bad health, her weight and her many miscarriages.

They are central to how Olivia Colman portrays the queen in “The Favourite,” one of the leading films in this year’s Oscars race. (Ms. Colman got a best actress nod.)

The movie focuses on Anne’s relationship with her favored confidantes — Sarah Churchill and her cousin Abigail Masham — and the many power struggles within the royal court.

She’s shown as a weak monarch, if a stubborn one — a view that caught on in her own time and mostly stuck.

But historians see another side to Anne’s reign, too. She ruled during a period of military and economic progress for Britain.

She also oversaw the official unification of England and Scotland, creating the United Kingdom.

Surely the queen deserves a little credit for all that?

Claire Moses, a homescreen editor in our London office, wrote today’s Back Story.

Your Morning Briefing is published weekday mornings and updated online. Sign up here to get it by email in the Australian, Asian, European or American morning. You can also receive an Evening Briefing on U.S. weeknights.

And our Australia bureau chief offers a weekly letter adding analysis and conversations with readers.

Paul Williams: 'Harris knows security is paramount but he has to explain bollard blunder'