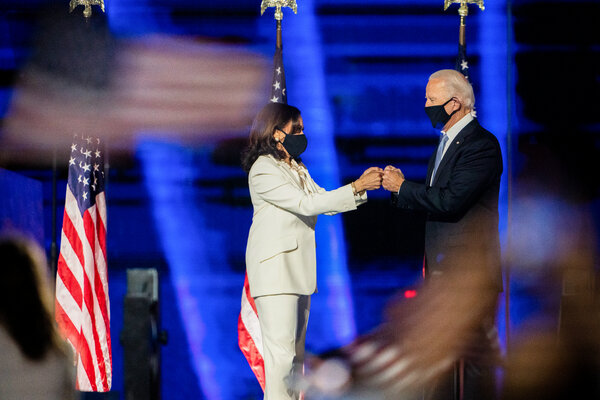 If Democrats had nominated any candidate other than Joe Biden, President Trump may well have won re-election.

It’s impossible to know for sure, of course. But Biden won the states that decided the election narrowly — by two percentage points or less in Arizona, Georgia, Pennsylvania and Wisconsin, current vote counts suggest. And there is good reason to believe other Democrats might have lost these states. Consider:

Nationwide, Biden is faring about 2.4 percentage points better than the average Democratic nominee for House seats, according to an estimate by Sean Trende of RealClearPolitics.

In several swing states — including Georgia, Michigan and North Carolina — Biden also did better than the Democratic nominees for Senate. (Arizona is an exception.)

In Nebraska’s Second Congressional District, the Democrats nominated a Bernie Sanders-style candidate — Kara Eastman, who backs “Medicare for all” and was endorsed by progressive groups like the Justice Democrats — for a House seat. She lost her race by almost five percentage points, while Biden won the district by almost seven points.

These election results are consistent with polls from over the past year that showed Biden faring better against Trump than other Democrats in hypothetical matchups.

Why does this matter? For the past four years, Trump has dominated American politics. At times, he has seemed to possess magical political powers, winning the presidency despite rejecting the usual rules of politics and maintaining a roughly steady approval rating even as he was impeached and presided over a terrible pandemic.

In the end, though, Trump didn’t have magical powers. He instead became only the fourth elected president in the past century to lose re-election, after Herbert Hoover, Jimmy Carter and George H.W. Bush. That’s the good news for Democrats.

But there is also a large dose of bad news for Democrats. Despite Trump’s defeat, the Republican Party has retained its popularity in much of the country. A small but crucial segment of Americans chose to vote for both Mr. Biden and Republican congressional candidates.

This combination means that neither party has an obvious path forward. Democrats are almost certainly fooling themselves if they conclude that America has turned into a left-leaning country that’s ready to get rid of private health insurance, defund the police, abolish immigration enforcement and vote out Republicans because they are filling the courts with anti-abortion judges. Many working-class voters — white, Hispanic, Black and Asian-American — disagree with progressive activists on several of those issues.

But the notion that Democrats should simply move to the center on every issue also seems wrong. A big increase in the minimum wage passed in Florida last week with 61 percent of the vote. Several drug-decriminalization measures also passed. Expansions of Medicaid, a health-insurance program mostly for low-income people, have also passed in red states.

Republicans have a different set of problems. They have lost the popular vote in seven of the last eight presidential elections. They now appear headed toward a messy struggle over who their new national leaders will be — or whether Trump himself will continue to dominate the party.

For more: Congressional Democrats are arguing over the party’s next steps, Michael Shear and Maggie Astor of The Times report. And Ross Douthat, an Op-Ed columnist, looks at how Republicans can become a majority party after Trump.

Biden has said he will undo several Trump administration policies — on climate change, the pandemic, labor unions and more — on his first day in office.

European diplomats expressed relief that the next U.S. president would treat them as allies instead of rivals, while Vladimir Putin of Russia seemed to be preparing for a more acrimonious relationship.

One White House tradition will return: the presidential pet. The Bidens have two German shepherds, Champ and Major.

Trump has still not conceded, and several prominent Republicans have urged him to continue challenging the results. “The media can project an election winner, but they don’t get to decide if claims of broken election laws & irregularities are true,” Senator Marco Rubio tweeted. “That’s decided by the courts, and on the basis of clear evidence and the law.” (There has been no evidence of meaningful voter fraud.)

Only two Republican senators — Mitt Romney of Utah and Lisa Murkowski of Alaska — have acknowledged Biden’s win. “At some point, truth, freedom and democracy have to ascend,” Romney said, “and you step aside.”

Former President George W. Bush congratulated Biden, writing: “Though we have political differences, I know Joe Biden to be a good man who has won his opportunity to lead and unify our country.”

Biden’s supporters were dancing in the streets this weekend. But only half the country was celebrating, and the nation’s divisions remain.

The number of Americans hospitalized with Covid-19 has nearly doubled since mid-September.

Tropical Storm Eta made landfall on the central part of the Florida Keys yesterday, bringing strong winds and heavy rains.

The Supreme Court will hear arguments tomorrow in a case that seeks to eliminate the Affordable Care Act. If the law is struck down, millions of people would lose health insurance and people with pre-existing conditions would struggle to buy insurance.

Fighting continued between Azerbaijan and Armenia over the weekend in the disputed border region of Nagorno-Karabakh. Azerbaijan — wanting to reclaim the region that is controlled by Armenian forces and mostly populated by Armenians — said its military captured a key town, which Armenian officials denied.

The Media Equation: For the past four years, The Times’s Maggie Haberman has been the source of much of what we know about Trump’s White House. The end of his presidency means the end of her wild ride, Ben Smith writes.

Lives Lived: Marguerite Littman, a honey-voiced Louisianian and literary muse, taught Hollywood to speak Southern. But her most enduring legacy was as an early force in the fight against AIDS. She died at 90.

Subscribers make our reporting possible, so we can help you make sense of the moment. If you’re not a subscriber, please consider becoming one today.

Alex Trebek began hosting “Jeopardy!” in 1984, sporting a thick mustache and a pale pink pocket square on his first episode. He got the job partly because Lucille Ball, of “I Love Lucy” fame, had encouraged the show’s producer to hire him. He went on to host more than 8,000 episodes, breaking a record set by Bob Barker of “The Price is Right” for hosting the most episodes of a single game show.

On Sunday, Trebek died at 80, more than a year after announcing he had Stage 4 pancreatic cancer. His death led to an outpouring of tributes from fans who saw him as a steady — and witty — presence in their homes.

In living rooms across the country, five nights a week, viewers could count on “an honest, no-frills test of knowledge” guided by Trebek, as a 2002 Times article put it. “We’re comfortable, like an old pair of shoes,” Trebek said. “We don’t come on with a splash.” Pre-pandemic, Trebek would host five episodes a day, two days a week, from July to April. He would go over the 305 clues for that day’s shows at 7:30 a.m., making notes. If a clue seemed too difficult, he would tell the writers to remove it.

Part of his appeal was his honesty, which extended to his fight with cancer. He spoke about it publicly, saying his pain would sometimes shoot “from a three to an 11” during tapings.

“With his cerebral bearing and aura of quiet, impartial authority, he embodies ideals that feel endangered: the pursuit of knowledge, and the inherent value of facts,” Alexandra Alter wrote in a profile this year. And his honesty included flashes of restrained disappointment when contestants missed an easy question. His tone, he once told New York magazine, tried to convey: “How can you not get this? This is not rocket science.”

Still, many contestants adored him. Some were moved to tears upon meeting him. In one episode that aired last week, a contestant — an Indian immigrant named Burt Thakur — said that he had learned to speak English by watching Trebek as a child, sitting on his grandfather’s lap.

Episodes of the show hosted by Trebek will air through Dec. 25.

This gratin is a fresh way to use roasted cauliflower. Tossed with tomato sauce, sautéed red onions and goat cheese, it’s delicious.

Every year, millions of pilgrims descend on the central Iraqi city of Karbala to commemorate the religious holiday of Arbaeen. Take a tour of the festivities last year.

This week: “Derry Girls,” a vibrant, hilarious portrayal of teenagers coming of age during the Troubles in Northern Ireland.

Late night: Dave Chappelle hosted “Saturday Night Live,” hours after Biden was declared the winner, and urged Americans to “find a way to forgive each other.”

The pangram from Friday’s Spelling Bee was conditioning. Today’s puzzle is above — or you can play online if you have a Games subscription.

A correction: Friday’s newsletter incorrectly stated that the number of votes cast in Georgia was three million; it was nearly five million.

P.S. From The Onion: “Media Condemns Biden For Baseless Claim That Nation Will Come Together Once Election Over.”

Today’s episode of “The Daily” is about Americans’ reaction to the election. On the latest Book Review podcast, Ernest Freeberg discusses the birth of the animal rights movement.

Lalena Fisher, Claire Moses, Ian Prasad Philbrick and Sanam Yar contributed to The Morning. You can reach the team at [email protected].

Joseph E Stiglitz: 'A 'democratic socialist' agenda sounds appealing – so it's no wonder Trump holds it in such disdain'