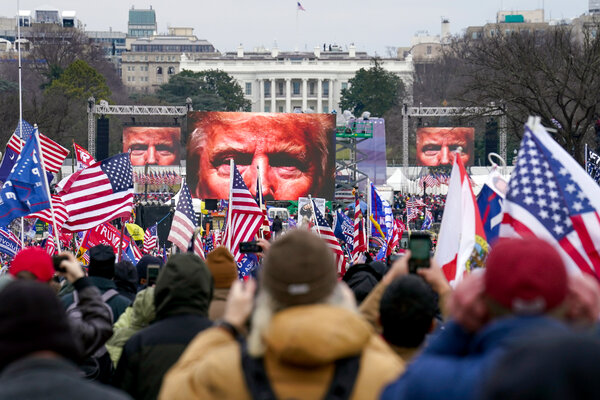 If the House impeaches President Trump this week, it will still have almost no effect on how long he remains in office. His term expires nine days from now, and even the most rapid conceivable Senate trial would cover much of that time.

But the impeachment debate is still highly consequential. The Senate has the power both to remove Trump from office and to prevent him from holding office in the future. That second power will not expire when his term ends, many constitutional scholars say. A Senate trial can happen after Jan. 20.

And disqualifying Trump from holding office again could alter the future of American politics.

It’s worth pausing for a moment to reflect on how radical a figure Trump is. He rejects basic foundations of American government that other presidents, from both parties, have accepted for decades.

He has tried to reverse an election result and remain in power by persuading local officials to commit fraud. He incited a mob that attacked the Capitol — and killed a police officer — while Congress was meeting to certify the result. Afterward, Trump praised the rioters.

This behavior was consistent with Trump’s entire presidency. He has previously rejected the legitimacy of election results and encouraged his supporters to commit violence. He has tried to undermine Americans’ confidence in the F.B.I., the C.I.A., the military, Justice Department prosecutors, federal judges, the Congressional Budget Office, government scientists, government health officials and more. He has openly used the presidency to enrich his family.

In the simplest terms, Trump seems to believe a president should be able to do whatever he wants. He does not appear to believe in the system of the government that the Constitution prescribes — a democratic republic.

Yet there is a significant chance he could win the presidency again, in 2024. He remains popular with many Republican voters, and the Electoral College currently gives a big advantage to Republicans. If he is not disqualified from future office, Trump could dominate the Republican Party and shape American politics for the next four years.

If he is disqualified, it’s impossible to know what would happen, but this much is clear: A singularly popular figure who rejects the basic tenets of American democracy would no longer be eligible to lead it.

What are the basics of disqualification?

Article I, Section 3 of the Constitution says: “Judgment in Cases of Impeachment shall not extend further than to removal from Office, and disqualification to hold and enjoy any Office of honor, Trust or Profit under the United States: but the Party convicted shall nevertheless be liable and subject to Indictment, Trial, Judgment and Punishment, according to Law.”

The Constitution does not specify whether disqualification requires a two-thirds Senate vote, as conviction in an impeachment trial does, or only a majority vote. The Senate has previously used a majority vote.

The Senate has barred three people, all federal judges, from holding future office: West Humphreys (in 1862, for waging war against the U.S.), Robert Archbald (in 1913, for corruption) and Thomas Porteous (in 2010, for bribery and perjury).

The Senate has tried a former War Department secretary — William Belknap, in 1876 — after he resigned. Both the House and the Senate decided that Belknap could be tried after he had left office.

Disqualifying a president from future office, because of the stakes and lack of precedent, would probably come before the Supreme Court. History suggests that the court would be more likely to uphold a bipartisan congressional vote than a largely partisan one.

For more: “If an impeachment begins when an individual is in office, the process may surely continue after they resign or otherwise depart,” Michael Gerhardt of the University of North Carolina School of Law writes in the online publication Just Security.

Speaker Nancy Pelosi said the House would proceed quickly with both impeachment and a resolution asking Vice President Mike Pence and the cabinet to remove Trump from office using the 25th Amendment.

But James Clyburn, the No. 3 House Democrat, said the House might delay sending an impeachment article to the Senate to avoid getting in the way of Joe Biden’s early presidential agenda. Such a delay could undercut any momentum to convict Trump.

Senator Pat Toomey of Pennsylvania became the second Republican senator to call for Trump to resign. Yet Toomey questioned whether the Senate could convict him after he left office.

Here is a closer look at what Trump said at the rally before the attack on the Capitol.

The chaos on Wednesday showed that government agencies had no coordinated plan to defend the Capitol, according to a Times analysis.

Federal and local authorities across the U.S. continued their hunt for members of the mob that stormed the Capitol. Here are some notable arrests.

Apple, Google and Amazon have removed Parler, a social media app popular with Trump supporters, from their platforms, saying that it had failed to moderate posts encouraging violence and crime.

The P.G.A. of America, which represents professional golfers, said it would strip its May 2022 championship from a Trump club.

Elite medical centers — at Harvard, Columbia, N.Y.U. and elsewhere — have inoculated employees and others who do not qualify for the initial round of coronavirus vaccinations. It’s an example of the effect of “cronyism and connections,” one expert said.

Florida decided people 65 and older should get vaccinated first, but demand has overwhelmed supply. “It became sort of lawless,” one doctor said.

Pope Francis’s personal physician died from complications of the virus. Francis himself expects to be vaccinated as soon as this week.

The authorities are still investigating Saturday’s crash of a Boeing 737-500 plane with more than 60 people on board in Indonesia. Here’s what we know.

A convicted kidnapper won a landslide victory in a presidential election in Kyrgyzstan.

Overdrawn: Some sperm banks are running low on supplies during the pandemic. Enter the sperm kings.

Lives Lived: Michael Apted, a versatile director, made his most lasting mark with the “Up” documentary series, which followed the lives of a group of British people at seven-year intervals over six decades. He died at 79.

Ved Mehta, a celebrated writer for The New Yorker, was best known for exploring the history of modern India through 12 volumes of memoir. He died at 86.

Anyone who watches the new Netflix show “Bridgerton” is likely to notice something about the cast: its diversity. While most British period dramas feature predominantly white casts — portraying white historical figures — Bridgerton’s version of 1800s London includes Black royalty and aristocrats.

Chris Van Dusen, the show’s creator, explained that the approach to casting was not “colorblind.” The show incorporates race into its plot. Some historians have suggested that Queen Charlotte might have had African ancestry, and “Bridgerton” builds an alternative history in which she bestows nobility on some Black families. “Color and race are a part of the show and as much of a part of the conversation as things like class and gender and sexuality are,” Van Dusen told The Los Angeles Times.

Showrunners often attribute a lack of diverse casting to historical accuracy. But all-white casts often ignore British people of color in earlier centuries. And no period piece is fully accurate. As the director Josie Rourke told the BBC, “People are focusing so intensely on people of color being in period dramas, but they didn’t care in ‘Mary Queen of Scots’ that Margot Robbie was Australian or Saoirse Ronan was Irish, that nobody had wooden teeth or that the costumes were made out of denim.”

Salamishah Tillet writes in The Times that “Bridgerton” offers a blueprint for historical shows that let Black characters thrive “without having to be servants or enslaved.” The series is also part of a small trend: Other British period dramas that include Black main characters include Starz’s “The Spanish Princess” and PBS’s “Sanditon.”

Cauliflower soup with rosemary olive oil is creamy and delicious.

HBO Max has ordered 10 new episodes of “Sex and the City.”

What’s next for Drew Barrymore? Hosting a talk show.

These five minutes will make you love the flute.

The pangram from Friday’s Spelling Bee was offhanded. Today’s puzzle is above — or you can play online if you have a Games subscription.

P.S. Matt Mason, the state poet of Nebraska, wrote a poem for The Times in response to the attack on the Capitol.

Today’s episode of “The Daily” is about the virus variant and the vaccination rollout. On the latest Book Review podcast, Charles Yu discusses his novel “Interior Chinatown,” and David S. Brown talks about Henry Adams.

Claire Moses, Ian Prasad Philbrick, Tom Wright-Piersanti and Sanam Yar contributed to The Morning. You can reach the team at [email protected].

Declan Lynch: 'The best leaders are not to be found in politics'