Home » Analysis & Comment » The Double Life of Franco A.

Good morning. The House votes for bigger stimulus checks. A ban on most evictions in New York. But first, a story of far-right extremism in Germany. 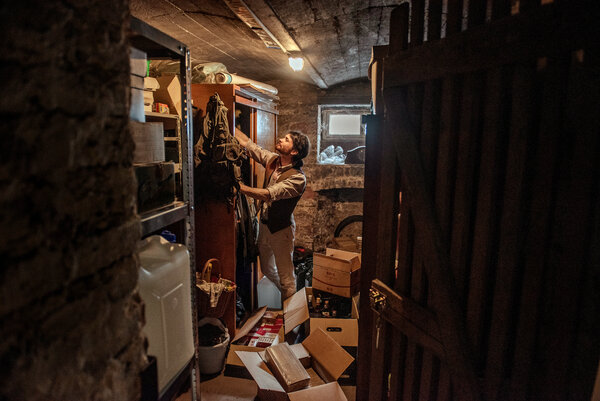 The far right is gaining visibility across the West, including in the United States. But it’s particularly pronounced in Germany, where cases of extremists in the military and the police have recently multiplied, Katrin reported this year.

Franco A., a lieutenant in the German Army, pretended to be a Syrian refugee during the height of Europe’s migrant crisis. He had darkened his face and hands with his mother’s makeup and applied shoe polish to his beard. The ruse, according to prosecutors, was part of a far-right plot to carry out one or several assassinations for which his refugee alter ego could be blamed, and to set off enough civil unrest to bring down the Federal Republic of Germany.

Franco denies this. He says he was trying to expose flaws in the asylum system. His double life, which lasted 16 months, unraveled after the police caught him trying to collect a loaded handgun from an airport bathroom in Vienna. (How Franco got the gun, as well as what he was planning to do with it, remains a mystery, Katrin says.)

“There was endless and difficult digging to be done,” Katrin, who has been covering the far-right in Germany since 2018, told me about reporting today’s story. “I spent so many hours trying to glean information on this guy.”

The breakthrough came when she obtained voice memos that Franco had recorded on his iPhone. In the memos, Franco praises Hitler, questions Germany’s atonement for the Holocaust and indulges conspiracies, among other things.

Franco, who received glowing reviews during his time as an officer, was largely radicalized online, Katrin says, partly by watching conspiracy theories on YouTube.

What makes him interesting “is so much bigger than his own story,” Katrin says. “People have taken a very hard look at history. And atonement is part of German culture today — that’s real. But the backlash is equally real.”

The House passed a bipartisan bill to increase the size of individual stimulus checks to $2,000 from $600, endorsing a measure demanded by President Trump and daring Senate Republicans to either do the same or defy the president.

The House rejected Trump’s veto of a military spending bill, setting up the first veto override of his presidency. Senator Bernie Sanders said he would delay a Senate vote on the measure unless members voted on the bill to increase stimulus checks.

President-elect Joe Biden accused Trump administration officials of impeding his transition team. “We just aren’t getting all the information that we need from the outgoing administration in key national security areas,” Biden said.

Air travel in the U.S. over the Christmas weekend was the highest it’s been during the pandemic. It’s still much lower than last year: About 3.8 million people passed through airports from Dec. 23 to Dec. 26, compared with 9.5 million over the same days in 2019.

New York State banned most evictions for at least another 60 days, as tenants struggle to pay rent during the pandemic. It’s one of the most comprehensive anti-eviction laws in the country.

A very small number of Covid patients who have never experienced mental health problems are developing severe psychotic symptoms, including hallucinations, paranoia and violent impulses, weeks after contracting the virus.

A judge in Saudi Arabia sentenced Loujain al-Hathloul, an activist who fought for women’s right to drive, to more than five years in prison on charges of undermining the kingdom. Her supporters called the case political persecution.

The police in Oakland, Calif., are investigating who vandalized a weeks-old ceramic statue of Breonna Taylor.

A federal judge again denied bail to Ghislaine Maxwell, the British socialite and longtime companion of Jeffrey Epstein who is charged with abetting his abuse of teenage girls. Prosecutors called Maxwell “an extreme flight risk.”

A Morning Read: “There is no such thing as cruelty-free milk.” Facing pressure from animal rights activists, dairy farmers are beginning to alter their practices.

From Opinion: Representative Deb Haaland of New Mexico will have to balance the conflicting interests of tribal communities and the federal government if she becomes the first Native American cabinet secretary, the journalist Claudia Lawrence argues.

Lives Lived: Dr. H. Jack Geiger helped found community health centers and advocacy groups in response to poverty, discrimination and war. He believed doctors should use their expertise and moral authority to change the conditions that make people sick in the first place. He died at 95.

Send someone a snack

For most of the year, going out for restaurant meals has been all but impossible. When people wanted a treat — and didn’t want to spend a lot of time making it — they often turned to options that could be delivered. “This year, especially this season, it’s not just a fruitcake or a box of chocolate or a bottle of wine,” Florence Fabricant, who has written about food and wine for The Times for more than 40 years, told us. “I see more interest in wanting to be able to send real food.”

Here are some of Florence’s recommendations:

A Neapolitan pizza. Straight from Naples, Italy, this frozen pizza takes about 10 minutes to heat in a 400 degree oven. Travel on your taste buds.

Rare Southern honey. The Savannah Bee Company, based in Georgia, has all sorts of goodies, most of them sweet.

A cheese box. Florence recommends one from a dairy like Jasper Hill Farm in Vermont, but there are many local options to try. (If you’re looking for flavors from Wisconsin, you’re also in luck.)

A hearty sourdough. The bakery adjacent to Manresa, a three-star restaurant in Los Gatos, Calif., ships grain-to-flour breads across the country. (They also do a mean kouign-amann, a flaky Breton confection.)

If you’re looking to stay closer to home and keep it simple, you could always order a bottle of wine from your — or your friends’ — local liquor store.

If you enjoy our suggestions for what to cook, you can get the full recipes — plus cooking guides, videos, tips and more — with a subscription to NYT Cooking. Consider subscribing today.

The Joy of Dining

A Times columnist misses restaurants in New York and counts the lessons she learned while going out to eat.

Times food writers eulogized some of their favorite restaurants that closed this year.

The pangram from yesterday’s Spelling Bee was challenge. Today’s puzzle is above — or you can play online if you have a Games subscription.

Thanks for spending part of your morning with The Times. See you tomorrow. — Claire

Today’s episode of “The Daily” is about a new way to mourn. On the latest “Sway,” the astrologer Chani Nicholas demystifies a $2.2 billion industry.

Amelia Nierenberg, Ian Prasad Philbrick and Sanam Yar contributed to The Morning. You can reach the team at [email protected].

Declan Power: 'If the Government was serious on Lisa Smith issue, it would have sent in forces'

Ian O'Doherty: 'Going out to vote is so boring, We need a 'Love Island' election!'