Good morning. A simple chart shows why the new coronavirus variants are so worrisome. 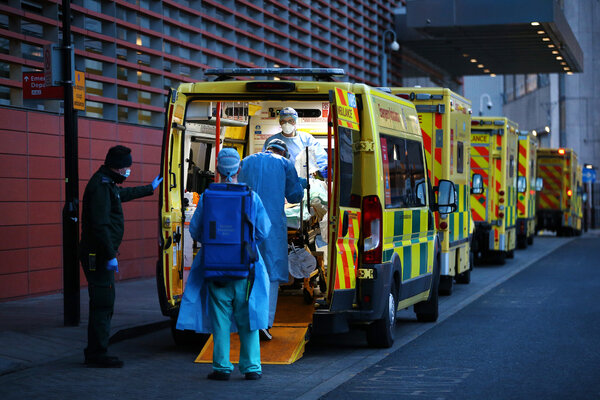 This simple chart shows why the new variants of the coronavirus — first detected in Britain and South Africa — are so worrisome:

The chart compares the spread of the virus in each of those two countries with the spread in a group of nearby countries. As you can see, cases have surged in Britain and South Africa since the variants first surfaced — while holding fairly steady in the rest of western Europe and southern Africa.

The new variants may not be the only reason. Britain and South Africa differ from their neighbors in other ways, as well. But there is no obvious explanation for the contrast besides the virus’s mutations.

This suggests the rest of the world may now be at risk of a new Covid-19 surge.

The variants already seem to have spread around much of the world. More than 30 other countries, including the U.S., have diagnosed cases with the variant first detected in Britain, which is known as B.1.1.7. Scientists say that it could soon become the dominant form of the virus.

The B.1.1.7 variant appears to be between 10 percent and 60 percent more transmissible than the original version. One possible reason: It may increase the amount of the virus that infected people carry in their noses and throats, which in turn would raise the likelihood that they infect others through breathing, talking, sneezing, coughing and so on.

As I’ve explained before, the biggest factor that will determine how many more people die from the virus isn’t likely to be the precise effectiveness of the vaccines or even the speed of their rollout. The biggest factor is instead likely to be how much we reduce the spread of the virus over the next few months, through a combination of mask wearing, social distancing and expanded testing. Those efforts can cut caseloads — and, by extension, deaths — more rapidly than a mass vaccination campaign can.

But the U.S. was struggling to hold down new infections even before the variants appeared, and they will probably make the job more difficult. “I dismissed the news initially because viruses mutate all the time and there have been too many baseless ‘mutant-ninja virus’ doomsaying headlines this year,” Zeynep Tufekci wrote in The Atlantic last week. “However, as data on the new variant roll in, there is cause for real concern.”

My colleague Apoorva Mandavilli, in a piece explaining what scientists do and don’t know about the variants, writes that they may end up “exacerbating an unrelenting rise in deaths and overwhelming the already strained health care system.”

In a phone call, President Trump pressured Georgia’s secretary of state to change the vote totals in the state to overturn his loss. “I just want to find 11,780 votes” Trump said. Georgia officials rebuffed Trump’s demands.

The president suggested on the call that the Georgia officials could be prosecuted if they did not do his bidding. But it was Trump’s attempt at coercion that may have violated the law, lawyers told The Times.

During the call, Trump recited a number of falsehoods that have circulated on social media involving dead voters, voting machines and shredded ballots. Listen to parts of the call here.

Senator Ted Cruz of Texas was once on the receiving end of Trump’s false claims of election fraud. Now, Cruz is perpetuating those falsehoods.

In an op-ed for The Washington Post, all 10 living former secretaries of defense — including Dick Cheney and James Mattis — said the election results were definitive and cautioned the military not to get involved in Trump’s effort to overturn the election.

Both Trump and President-elect Joe Biden will campaign in Georgia today before tomorrow’s Senate runoff elections. Democrats must win both seats to win Senate control.

An outbreak at a convent near Albany, N.Y., has infected nearly half of its roughly 100 residents. Nine sisters, all older than 80, died of Covid-19 in December.

India approved two virus vaccines, one made by AstraZeneca and Oxford University and the other by Bharat Biotech, an Indian drugmaker.

Oregon set aside $62 million of its $1.4 billion in federal coronavirus relief funds for Black residents, in recognition of the pandemic’s disproportionate toll on them. Now one Mexican-American and two white business owners are suing the state, arguing that the program was discriminatory.

An inflatable holiday-themed costume may be behind an outbreak at a California hospital. An employee wore an “air-powered” costume on Christmas Day, and within days 44 staffers had tested positive.

Scientists are debating vaccination tactics: Is it wisest to hold back supplies for quick second shots, or to delay the second inoculation to give as many people as possible the partial protection of a single dose?

One year ago today, Stat News published an article by Helen Branswell with this headline: “Experts Search for Answers in Limited Information About Mystery Pneumonia Outbreak in China.” Today, Stat has published a Q. and A. with Branswell putting the last year in perspective.

The 117th Congress convened for the first time on Sunday and re-elected Nancy Pelosi as House speaker. Democrats control 222 of 435 seats, the slimmest majority either party has held in two decades.

More than 225 Google engineers and other workers have formed a union, a rarity in Silicon Valley. Members said their main goal was to protect employees who speak out on matters like diversity and sexual harassment, rather than to negotiate contracts.

The WikiLeaks founder Julian Assange cannot be extradited to the U.S., a British judge ruled, giving him a victory against the American authorities who accused him of conspiring to hack government computers and releasing confidential documents.

From Opinion: “I’m a miracle. I will make it. I have to make it.” Toby Levy, a Holocaust survivor, reflects on living through the pandemic.

Lives Lived: Brian Urquhart joined the United Nations at its creation in 1945. He spent the next four decades directing peacekeeping operations, leading U.N. forces into war zones including Congo, Kashmir and Cyprus. Urquhart died at 101.

Results from the Great 2020 News Quiz

Several hundred thousand readers took our year-end news quiz, and we wanted to report back with some results. As we wrote at the end of the quiz, it wasn’t meant to be easy. Anyone who finished it — regardless of score — should feel good. (If you haven’t taken it yet, we encourage you to do so.)

The median score was 15, or exactly half of the quiz’s 30 questions. So if you got more than half right, you did better than most Times readers. Only 0.4 percent — or about one person in 250 — got every question right.

The single hardest question turned out to be the one that asked you to name the countries that bordered Armenia or Azerbaijan. Only 8.5 percent of respondents got it right.

The other more difficult questions were the ones about the author who had the most Times best sellers this year (9.4 percent correct); the Covid-19 death toll in Sweden (10.8 percent); the Black-white wage gap (11.2 percent); and the identity of a speaker during Trump’s impeachment trial (15.3 percent).

The easiest question was the one that asked you to identify a man whose 250th birthday was celebrated in 2020 (96 percent correct). After that came questions about the identity of a woman in Louisville (89.1 percent); the coronavirus advice that experts have since retracted (84.4 percent); the identity of a boy band (82.7 percent correct); and a protest in China (74.8 percent).

Thanks to everyone who took the time to play. We’ll be publishing more quizzes in 2021.

Leeks, parsnips and a few spices make this simple soup.

It started as a TikTok meme and became “Ratatouille: The TikTok Musical.” And it could have lessons for Broadway, our reviewer writes. The show is streaming until 7 p.m. Eastern tonight.

Nicolas Cage hosts the history of swearing. Lorde writes a book and Julie Mehretu takes over the Whitney. Here are some things Times critics are looking forward to in the first half of 2021.

The pangram from Friday’s Spelling Bee was promontory. Today’s puzzle is above — or you can play online if you have a Games subscription.

P.S. A nightly email from Steve Kenny, The Times’s senior editor for nights, keeps the newsroom (including the Morning team) informed of what happened while many of us were asleep. The Times put together a collection of “late notes” that tell the story of 2020.

Today’s episode of “The Daily” is about the U.S. Senate runoffs in Georgia.

Lalena Fisher, Claire Moses and Tom Wright-Piersanti contributed to The Morning. You can reach the team at [email protected].