At least 12 people, including a sheriff’s deputy, were killed late Wednesday in a shooting at a country and western dance hall in Thousand Oaks, Calif., officials said.

The gunman is also dead, officials said, adding that there was no longer a threat to the public after the shooting at the dance hall, the Borderline Bar and Grill, which was holding an event for college students.

• The location: Thousand Oaks, a relatively affluent city in Ventura County, is about 40 miles northwest of downtown Los Angeles.

President Trump replaced Attorney General Jeff Sessions on Wednesday with Matthew Whitaker, who has questioned the scope of the special counsel’s investigation into Russian interference in the 2016 presidential election.

Mr. Sessions, who resigned at the president’s request, recused himself in March 2017 from overseeing the investigation, citing his role in Mr. Trump’s campaign. Rod Rosenstein, the deputy attorney general, has been overseeing the inquiry.

As acting attorney general, Mr. Whitaker now has that responsibility. He has said that the special counsel, Robert Mueller, would be going too far if he examined the Trump family finances.

• Profile: Mr. Whitaker, Mr. Sessions’s chief of staff and a former U.S. attorney, has been forging ties to the White House, where he is seen as a reliable ally.

• Looking back: Mr. Sessions helped promote Mr. Trump’s agenda, particularly on immigration and in addressing violent crime and opioids, but his recusal from the Russia investigation cost him the president’s support.

• What’s next: One of our Washington correspondents answered questions about the implications of Mr. Sessions’s firing.

Listen to ‘The Daily’: Why Trump Is Firing Sessions Now

A new era of divided government

A day after his party lost control of the House, President Trump threatened to adopt a “warlike posture” if Democrats used their new power to investigate his financial and political dealings.

He made his remarks at a news conference that started with an offer to work across party lines. He went on to scold reporters whose questions or behavior he didn’t like, including Jim Acosta of CNN, whose White House credentials were suspended by the end of the day.

• The House: Democrats made gains by focusing on health care, while Republicans lost their grip on unity and messaging, our correspondents write.

• The Senate: Republican wins have strengthened the influence of social conservatives, who are seeking to push harder to the right on issues including abortion.

• Election firsts: There will be at least 100 women in the House next year. Here are some others who made history on Tuesday. 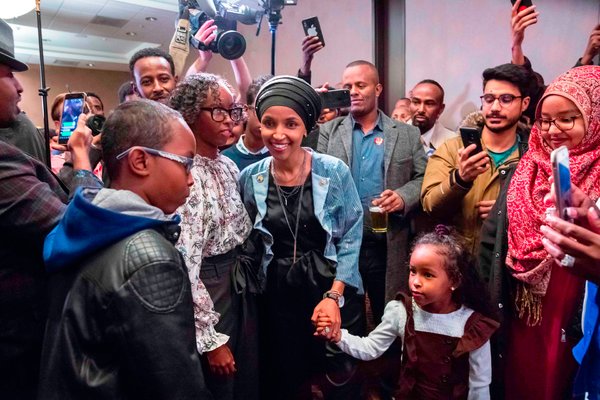 • Too close to call: Several races, including the one for Georgia governor, have yet to be decided.

• Partisan picks: Writers from across the political spectrum discuss the midterm elections.

The goal of talks scheduled for today had been to plan a second summit meeting between President Trump and the North Korean leader, Kim Jong-un.

But the State Department announced on Wednesday that the meeting between Mike Pompeo, the secretary of state, and a top North Korean official had been canceled.

• Mixed messages: Mr. Trump later said that the meeting would be rescheduled and that “we’re very happy with how it’s going with North Korea.”

• What might Democratic control of the House mean for your wallet? Tax-overhaul initiatives could be blocked, but there may be room for agreement on other measures. Here’s a breakdown.

• Tesla named Robyn Denholm, an Australian telecommunications executive, as its new chairwoman, as it tries to move beyond regulatory problems and concerns about Elon Musk’s leadership. Mr. Musk will remain chief executive.

• Google is in discussions to move into an office complex on Manhattan’s West Side that could allow it to more than double its local work force of 7,000.

• Canada is running low on legal marijuana three weeks after recreational use of the drug became legal. The shortage is sending some frustrated consumers back to the black market.

• AbeBooks, a secondhand bookselling network owned by Amazon, bowed to a worldwide strike of antiquarian booksellers, appearing to reverse its largely unexplained decision to cut off stores in five countries.

• U.S. stocks were up on Wednesday. Here’s a snapshot of global markets today.

• Take charge of your medical care. Be your own advocate.

• Recipe of the day: Fans of sweet potatoes will love them mashed with bourbon and brown sugar.

New York City’s subway conductors don’t make up the things they say. They follow scripts, and those scripts are about to be revised. We look at the differences.

The filmmaker and his partner, Juman Malouf, were given free rein to create an exhibition of the treasures in Austria’s largest museum. But you can’t make an exhibition as you would a movie, our critic writes.

“Elevation,” the latest by Stephen King, is No. 1 on our hardcover fiction list. His previous book, “The Outsider,” debuted in the top spot in June. You can find all of our best-seller lists here.

In a world of climate change, and Instagram, plant influencers are eager to help you create a biome of your own.

The comedy hosts bid goodbye to the former attorney general: “No word what Jeff Sessions is going to do next; I assume he’s going to spend more time with his family-separation policy,” Stephen Colbert said.

• Quotation of the day

“The further you get from metropolitan areas, the more powerful Donald Trump is and the more allegiance there is to whatever he says and does.”

— Senator Claire McCaskill of Missouri, one of three red-state Senate Democrats swept out of office on Tuesday.

• The Times, in other words

Here’s an image of today’s front page, and links to our Opinion content and crossword puzzles.

Jan Hoffman, a health behaviors reporter, recommends this piece from The New Yorker: “Oklahoma has the country’s highest rate of incarceration for women, and 85 percent are mothers. Here’s a meticulously observed, harrowing chronicle about Still She Rises, a feminist legal squad from New York City that relocates to bright red Tulsa, intending to battle for these women and the children who’ve been separated from them.”

“It’ll be up in lights on Broadway: Kong, the Eighth Wonder of the World!” an adventurer exclaims in the 1933 film “King Kong.”

Before the movie was released, the excitement was palpable, even if newspapers didn’t exactly know what would be happening. “The film will show prehistoric monsters fighting one another and making weird sounds,” The Times wrote in 1933.

It was easy to see why the movie would be popular. The stop-motion special effects were groundbreaking, although film scholars saw thinly veiled racist overtones.

Nevertheless, the Times reviewer was enthralled: “Imagine a 50-foot beast with a girl in one paw climbing up the outside of the Empire State Building.”

The movie, starring Fay Wray as the beauty who charms the beast, was among the first to be shown at Radio City Music Hall in New York City, shortly after the 6,200-seat theater was converted to show films.

A box office hit, the movie was rereleased periodically and has featured in numerous remakes.

In the original, Kong was an 18-inch puppet. In the new Broadway production, the ape is 20 feet tall and weighs 2,000 pounds. Not bad for the Eighth Wonder of the World.

Your Morning Briefing is published weekdays and updated all morning. Browse past briefings here.

Sign up here to get it by email in the Australian, Asian, European or American morning. To receive an Evening Briefing on U.S. weeknights, sign up here.

Check out our full range of free newsletters here.

COMMENTARY: A pandemic misinformation law is the wrong response to a real problem

Opinion | Would You Let a Robot Take Care of Your Mother?