A disdain for the courts

The acting attorney general, Matthew Whitaker, said in 2014 that the courts “are supposed to be the inferior branch” of government, and he criticized the Supreme Court’s power to review legislative and executive acts and to declare them unconstitutional.

Mr. Whitaker’s record has been under scrutiny since President Trump forced out Attorney General Jeff Sessions this week. The acting chief has disparaged the special counsel investigation of Russian election interference, which he now oversees.

• Business ties: Mr. Whitaker served on the board of a company that used his position as a former federal prosecutor to threaten consumers who tried to get their money back.

• A final act: Before he was fired, Mr. Sessions ordered drastic limits on the ability of federal law enforcement to overhaul local police departments accused of abuses and civil rights violations.

Second brush with a mass shooting

The Borderline Bar & Grill in Thousand Oaks, Calif., where a gunman killed 12 people, was a popular hangout for country music fans, some of whom survived last year’s massacre at a festival in Las Vegas.

The gunman, Ian Long, 28, was found dead at the scene. He was a Marine Corps veteran who had served in Afghanistan, and mental health specialists had suspected he had post-traumatic stress disorder.

• The victims: A longtime sheriff’s deputy was among those killed at the bar.

• The laws: California has some of the strictest gun control measures in the country. The assailant used a .45-caliber handgun that had been purchased legally.

• The industry: The Country Music Association Awards next week will be the second in a row to closely follow a mass shooting. While many entertainers have taken political stands in the last two years, the world of country music is more cautious.

President Trump is expected to announce today which countries will fall under new national security rules that give him broad authority to deny asylum to virtually any migrant.

They are widely expected to affect people from Central America.

• With the caravan: Our correspondent is traveling with migrants making their way through Mexico and toward the U.S. border. 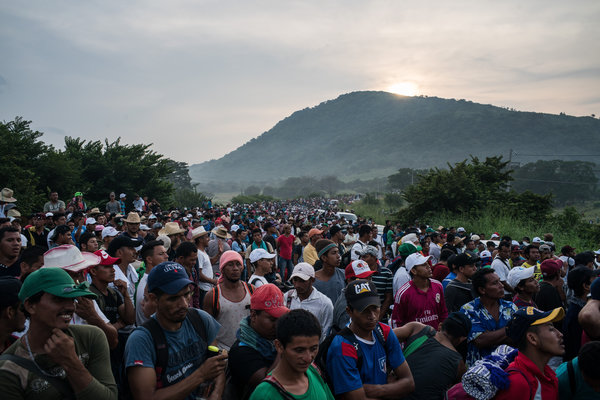 • The “Dreamers”: A federal appeals court on Thursday upheld a nationwide injunction against the Trump administration’s attempt to revoke deportation protections for some 700,000 people brought into the U.S. illegally as children.

Georgia and Florida still can’t say for sure who won three top contests on Tuesday.

Officials are still counting absentee, provisional and overseas ballots in the two states’ races for governor as well as in Florida’s Senate contest.

The situation has unleashed hordes of lawyers, talk of recounts and runoffs, and the kind of bickering that brought back memories of the 2000 presidential election.

• Turnout: Americans cast ballots on Tuesday at rates not seen in a midterm election in half a century. Here’s what the data tells us (and doesn’t yet).

• A changing Congress: A record 34 women were newly elected to the House on Tuesday, beating a previous high set in 1992.

Listen to ‘The Daily’: How the Democrats Flipped the House

Dozens of world leaders, including President Trump, will be in France this weekend to commemorate the 100th anniversary of the end of World War I.

The French president, Emmanuel Macron, wants to use the occasion to reinforce European unity and highlight the dangers of nationalism. But the event may highlight his increasing isolation.

• A federal judge in Montana blocked construction of the Keystone XL pipeline while the State Department provides a fuller explanation of how the 1,184-mile project would affect the environment.

• The Food and Drug Administration plans to ban sales of most flavored e-cigarettes in retail stores and gas stations.

• Google said it would end its practice of forced arbitration for claims of sexual harassment or assault.

• We’re introducing a Sunday newsletter, “With Interest,” to bring you essential business insights to prep you for the week ahead. Sign up here.

• U.S. stocks were mixed on Thursday. Here’s a snapshot of global markets today.

• The holiday season is almost here. Be a good gift-giver.

• One thing to help the environment: Get active in your community. (And share your ideas here.)

• Recipe of the day: End the week with a delicious pasta tossed in a broccoli-walnut pesto.

• Another (ancient) wave of migrants

New DNA findings lend astonishing detail to a story once lost to prehistory: how and when humans spread across the Western Hemisphere.

• The week in good news

With the end of daylight saving time in the U.S., we talked to Marvin Schneider, who takes care of some of New York’s grandest public clocks. It’s one of seven stories that inspired us.

Did you keep up with this week’s news? Test yourself.

• Ready for the weekend

At the movies, we review “The Ballad of Buster Scruggs,” directed by Joel and Ethan Coen; the second installment in J.K. Rowling’s “Fantastic Beasts” series; and “The Girl in the Spider’s Web” (a.k.a. the one with the dragon tattoo). You can find all of this week’s film reviews here.

On TV, Roberto Aguirre-Sacasa is the showrunner of “Riverdale” and “Chilling Adventures of Sabrina.” He’s also “a John Hughes for a darker, more cynical, way more libidinous age.” Read our profile.

An Andy Warhol exhibition at the Whitney Museum of American Art is the artist’s first full American retrospective in 31 years. Our critic loved it.

A $35 million musical version of “King Kong” that opened on Thursday didn’t go down so well, though. “Aaaaaaaaargh” was one reviewer’s reaction.

We suggest 12 new books and, if you’re in New York City, a slate of cultural events.

A veterinarian said that rabbits, under stress, tended to die quickly. A couple hoped their rabbit — and their new love — would prove more resilient. Read this week’s Modern Love column.

Stephen Colbert criticized Sarah Huckabee Sanders for circulating a misleadingly edited video of Jim Acosta of CNN: “That the White House press secretary is promoting this doctored video is reprehensible, and grounds for dismissal. Or as they call it in the Trump administration, Thursday.”

• Quotation of the day

“He knew what he was doing. He had perfect form.”

— Teylor Whittler, a survivor of the mass shooting at a California bar, describing the gunman.

• The Times, in other words

Here’s an image of today’s front page, and links to our Opinion content and crossword puzzles.

Randy Archibold, an editor in sports, recommends this piece from Sports Illustrated: “Lady Leadfoot had an affair with Steve McQueen. Lady Leadfoot hung out with Miles Davis. Lady Leadfoot wrote about sports in the 1950s at a time few women did. But more than anything, Lady Leadfoot raced cars, and raced them to victory. The journalist Amy Wallace captures the fascinating, pioneering life of Denise McCluggage.”

Recently, a visitor has been paddling around a lake in New York’s Central Park: a brightly colored duck.

The duck, which quickly became a star on social media, is known as a yuānyang (鸳鸯) in China. In English, it’s a Mandarin duck. Why?

The fowl’s vibrant plumage recalls the dress of government bureaucrats centuries ago, called mandarins in the West. The same connection applied to the dialect those officials used. Even mandarin oranges got the linguistic overlay.

But mandarin is not a Chinese word. Its etymology is disputed.

Others say the term comes from “menteri,” Malay for “court councilor” or “minister,” and that the 16th-century Portuguese who used Malaysia as a steppingstone to China wrote it as “mandarin.”

The duck in Central Park has been solo, but in China, its cousins are believed to be lifelong couples. There is a saying: A pair of Mandarin ducks is more enviable than an immortal.

Amy Chang Chien wrote today’s back story. It was first published in our new Chinese-language Morning Briefing. (Sign-up for that here.)

Your Morning Briefing is published weekdays and updated all morning. Browse past briefings here.

Sign up here to get it by email in the Australian, Asian, European or American morning. To receive an Evening Briefing on U.S. weeknights, sign up here.

Check out our full range of free newsletters here.

Commentary: The power and the glory of Mexico’s populist president