Good morning. We explain why the vaccine news is better than you may think. 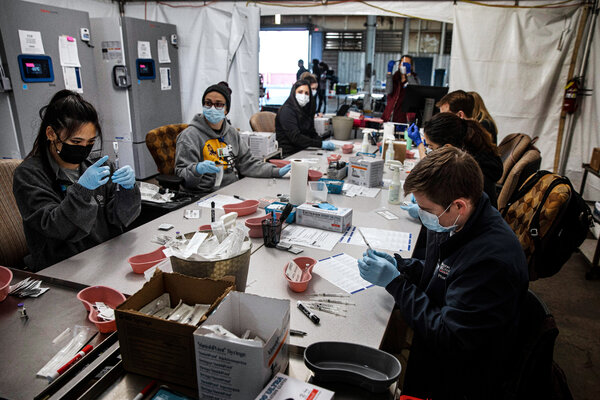 Early in the pandemic, many health experts — in the U.S. and around the world — decided that the public could not be trusted to hear the truth about masks. Instead, the experts spread a misleading message, discouraging the use of masks.

Their motivation was mostly good. It sprung from a concern that people would rush to buy high-grade medical masks, leaving too few for doctors and nurses. The experts were also unsure how much ordinary masks would help.

But the message was still a mistake.

It confused people. (If masks weren’t effective, why did doctors and nurses need them?) It delayed the widespread use of masks (even though there was good reason to believe they could help). And it damaged the credibility of public health experts.

“When people feel as though they may not be getting the full truth from the authorities, snake-oil sellers and price gougers have an easier time,” the sociologist Zeynep Tufekci wrote early last year.

Now a version of the mask story is repeating itself — this time involving the vaccines. Once again, the experts don’t seem to trust the public to hear the full truth.

This issue is important and complex enough that I’m going to make today’s newsletter a bit longer than usual. If you still have questions, don’t hesitate to email me at [email protected]

Right now, public discussion of the vaccines is full of warnings about their limitations: They’re not 100 percent effective. Even vaccinated people may be able to spread the virus. And people shouldn’t change their behavior once they get their shots.

These warnings have a basis in truth, just as it’s true that masks are imperfect. But the sum total of the warnings is misleading, as I heard from multiple doctors and epidemiologists last week.

“It’s driving me a little bit crazy,” Dr. Ashish Jha, dean of the Brown School of Public Health, told me.

“We’re underselling the vaccine,” Dr. Aaron Richterman, an infectious-disease specialist at the University of Pennsylvania, said.

“It’s going to save your life — that’s where the emphasis has to be right now,” Dr. Peter Hotez of the Baylor College of Medicine said.

Here’s my best attempt at summarizing what we know:

The Moderna and Pfizer vaccines — the only two approved in the U.S. — are among the best vaccines ever created, with effectiveness rates of about 95 percent after two doses. That’s on par with the vaccines for chickenpox and measles. And a vaccine doesn’t even need to be so effective to reduce cases sharply and crush a pandemic.

If anything, the 95 percent number understates the effectiveness, because it counts anyone who came down with a mild case of Covid-19 as a failure. But turning Covid into a typical flu — as the vaccines evidently did for most of the remaining 5 percent — is actually a success. Of the 32,000 people who received the Moderna or Pfizer vaccine in a research trial, do you want to guess how many contracted a severe Covid case? One.

Although no rigorous study has yet analyzed whether vaccinated people can spread the virus, it would be surprising if they did. “If there is an example of a vaccine in widespread clinical use that has this selective effect — prevents disease but not infection — I can’t think of one!” Dr. Paul Sax of Harvard has written in The New England Journal of Medicine. (And, no, exclamation points are not common in medical journals.) On Twitter, Dr. Monica Gandhi of the University of California, San Francisco, argued: “Please be assured that YOU ARE SAFE after vaccine from what matters — disease and spreading.”

The risks for vaccinated people are still not zero, because almost nothing in the real world is zero risk. A tiny percentage of people may have allergic reactions. And I’ll be eager to see what the studies on post-vaccination spread eventually show. But the evidence so far suggests that the vaccines are akin to a cure.

Offit told me we should be greeting them with the same enthusiasm that greeted the polio vaccine: “It should be this rallying cry.”

The costs of negativity

Why are many experts conveying a more negative message?

Again, their motivations are mostly good. As academic researchers, they are instinctively cautious, prone to emphasizing any uncertainty. Many may also be nervous that vaccinated people will stop wearing masks and social distancing, which in turn could cause unvaccinated people to stop as well. If that happens, deaths would soar even higher.

But the best way to persuade people to behave safely usually involves telling them the truth. “Not being completely open because you want to achieve some sort of behavioral public health goal — people will see through that eventually,” Richterman said. The current approach also feeds anti-vaccine skepticism and conspiracy theories.

We should immediately be more aggressive about mask-wearing and social distancing because of the new virus variants. We should vaccinate people as rapidly as possible — which will require approving other Covid vaccines when the data justifies it.

People who have received both of their vaccine shots, and have waited until they take effect, will be able to do things that unvaccinated people cannot — like having meals together and hugging their grandchildren. But until the pandemic is defeated, all Americans should wear masks in public, help unvaccinated people stay safe and contribute to a shared national project of saving every possible life.

Here’s Biden’s response to aides who use overly academic or elitist language: “Pick up your phone, call your mother, read her what you just told me,” he likes to say. “If she understands, we can keep talking.”

Law enforcement prepared for violence yesterday, after the F.B.I. warned of protests by armed far-right groups at statehouses. But protesters mostly stayed away.

Aleksei Navalny — Russia’s most prominent opposition leader — returned to the country five months after a near-fatal poisoning. The police arrested him at the airport.

As the U.S. coronavirus death rate climbs toward 400,000, interviews with dozens of health, political and community leaders offer a picture of what went wrong.

Egyptian officials denied that an oxygen shortage at a hospital in Cairo led to the deaths of Covid patients. A Times investigation found otherwise.

As countries around the world continue to struggle with lockdowns and layoffs, China’s economy has bounced back.

Media Equation: Fox settled a lawsuit over its lies about a murdered young man, but the network insisted that the settlement had to stay secret until after the 2020 election.

Lives Lived: Phil Spector was a pioneering producer who shaped the sound of pop music in the 1960s but who spent the end of his life in prison after murdering Lana Clarkson at his home in 2003. He has died, from complications from Covid-19, at 81.

Why sea shanties are suddenly viral

On TikTok in December, Nathan Evans, a 26-year-old Scottish postal worker and musician, shared a black-and-white video of himself singing a sea shanty — a traditional sailor’s work song — called “Soon May the Wellerman Come.” In the ensuing weeks, Sea Shanty TikTok was born.

Professional musicians, people driving in cars and even a Kermit the Frog puppet shared videos of themselves singing along. There were electro remixes. Some people began covering other songs, like “All Star” by Smash Mouth, in a sea-shanty style.

While the genre may seem like a strange one to go viral, the songs are relatively easy to learn. They also lend themselves well to collaboration, which TikTok’s functions encourage. An original goal of the sea shanty was to foster community, as sailors worked long hours aboard a ship.

“They are unifying, survivalist songs, designed to transform a huge group of people into one collective body, all working together to keep the ship afloat,” Kathryn VanArendonk writes in Vulture. And they’re especially fitting for a time when people are desperate for connection.

Hear new tracks from Flo Milli, Lana Del Rey and more — including a song that holds the single-day streaming record on Spotify.

The pangram from Friday’s Spelling Bee was javelin. Today’s puzzle is above — or you can play online if you have a Games subscription.

P.S. The word “chiroptophobia” — the fear of bats, which has spiked during the pandemic — appeared for the first time in The Times yesterday, as noted by the Twitter bot @NYT_first_said.

Claire Moses, Ian Prasad Philbrick, Tom Wright-Piersanti and Sanam Yar contributed to The Morning. You can reach the team at [email protected].

DraftKings to go public in 2020 at $3.3 billion valuation

Opinion | A More Honest State of the Union

Opinion | Why Is the Justice Department Treating T-Mobile Like a Client?