Top U.S. and Chinese officials are meeting in Alaska for tough talks, and the E.U. drug regulator says AstraZeneca is safe. 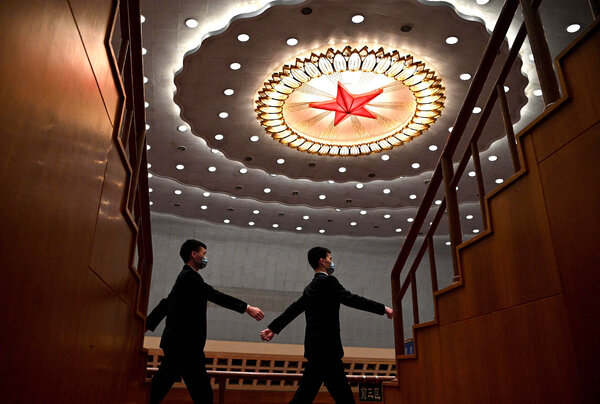 President Biden’s sharp shift in U.S. policy toward China puts tough issues on the table today for the first major meeting between senior officials from his administration and their Chinese counterparts.

Secretary of State Antony Blinken and the national security adviser, Jake Sullivan, will meet China’s top two diplomats, State Councilor Wang Yi and Yang Jiechi, the Chinese Communist Party foreign affairs chief, in Anchorage. They are likely to talk about Hong Kong, the status of Taiwan and the oppression of Uyghurs.

The strategy: The U.S. is shifting to a more competitive posture with Beijing, to counter its diplomacy around the world and ensure that China does not gain a permanent advantage in critical technologies. The Biden administration is cultivating allies — notably Japan, South Korea, India and Australia — to forge a common strategy in Asia.

From China’s viewpoint: The meeting will be a first demonstration of Beijing’s determination to stand up to the new administration. Chinese officials have been focusing on boosting their own country’s strength, with China’s leader, Xi Jinping, increasingly pivoting away from dependency on others.

Cui Tiankai, China’s ambassador to the U.S., told Chinese media that the country did “not expect one dialogue to resolve all the issues between the two sides,” but that he hoped it would set in motion constructive communication.

The European Medicines Agency said on Thursday that the AstraZeneca vaccine was safe and effective, a finding that could prompt more than a dozen countries to resume use after temporary suspensions.

Germany, France and Italy were among the countries that had paused the shot over concerns about possible rare side effects involving blood clots. The agency said a new warning label would be added so that doctors could be on the lookout for a potential rare complication leading to bleeding in the brain.

Despite reports of a handful of troubling incidents involving the AstraZeneca vaccine, a review of millions of cases found that it did not increase the overall risk of clots, though “there are still some uncertainties,” said Dr. Sabine Straus, who heads the agency’s risk assessment committee.

Quotable: “A situation like the one we have seen here is not unexpected,” the E.M.A.’s executive director said. “When you vaccinate millions of people, it’s inevitable that rare or serious instances or illnesses will occur in the time immediately following vaccination.”

Related: The U.S. plans to send millions of surplus doses of the AstraZeneca vaccine to Mexico and Canada, officials said.

Seoul authorities came under criticism for announcing a plan to test all foreign workers in the city for the coronavirus, with politicians and locals calling the plan xenophobic. An official said that a cluster of cases among foreign workers had led to the move.

A ‘crisis point’ for Asian-Americans

President Joe Biden and Vice President Kamala Harris plan to visit Atlanta on Friday, where communities are reeling after a gunman shot and killed eight people at three massage businesses in the Southern city. Six of the victims were women of Asian descent.

The nation has reached a “crisis point” in discrimination and violence targeting the Asian-American community, lawmakers warned during the first hearing in Congress dedicated to the issue in three decades. In deeply personal testimony, the lawmakers described community trauma and argued that the uptick in attacks on Asian-Americans was a direct result of the rise of anti-China rhetoric. The hearing was scheduled weeks ago, but resonated in a frightening moment.

From New York to Washington, crowds gathered this week to pay tribute to the victims. Delaina Ashley Yaun, 33, and her husband were looking forward to a relaxing date night at Young’s Asian Massage, a spa she had never visited before. Here’s what we’ve learned so far about the people who were killed.

A racist motive? Several recent attacks have not been charged as hate crimes, fueling protests and outrage among many Asian-Americans. Our reporters look at why the charges are so rare. And experts say racism and sexism must be part of the discourse, regardless of the charges, NBC reports.

The Biden administration is quietly pressing Mexico to curb the flow of migrants coming to the U.S., Mexican officials say, a move echoing Trump-era policy.

Russia recalled its ambassador to the U.S. and unleashed a storm of criticism after President Biden said in a television interview that he thought President Vladimir Putin was a killer.

The creative director of the Tokyo Olympics resigned after a Japanese magazine reported his proposal to cast a plus-size celebrity as an “Olympig” in the opening ceremony.

The Chinese government has signaled that it will soon begin trials of two Canadian men held in China for more than two years on vague charges of espionage, escalating a punitive campaign against Canada.

The Myanmar military’s latest claim against Daw Aung San Suu Kyi involves a construction tycoon alleging he had bribed her for months.

LinkedIn has been the lone major U.S. social network allowed to operate in China. To do so, the Microsoft-owned service for professionals has censored its posts. But now, it’s in hot water for failing to control political content.

Most pop songs since the 1960s — 84 percent by the end of the 1980s — have followed roughly the same structure. The opening verse sets the scene then the pre-chorus builds to a climax with the chorus. Repeat for decades.

Now that’s being upended, as Nate Sloan and Charlie Harding, co-hosts of the music podcast “Switched On Pop,” write in The Times. Many hits since the 2010s have eschewed the catchy, rigid structure for something wilder and less predictable. Their article visualizes these changes, charting the structure of pop hits from Billie Holiday to Billie Eilish.

Unpredictability is a matter of survival in the competitive landscape of social media platforms and music streaming services like Spotify. Many artists get to the hook of a song faster so the listener will hit the 30 seconds generally required for the streaming payment to register, then deliver a variety of catchy sections — rather than one repeating chorus — to keep people listening.

Streaming has also incentivized pop songs to become shorter, in part because people can easily skip around.

Make saag paneer, an Indian dish with spinach (or other dark greens) and spices.

In Brontez Purnell’s new book, “100 Boyfriends,” a rotating cast of narrators shares stories of desire and heartbreak. The critic Parul Sehgal calls it a “hurricane.”

P.S. A Bloomberg article looked at The Times’s investment in mobile games.

The latest episode of “The Daily” is on the killings in Atlanta and hate crimes against Asian-Americans.

Sanam Yar contributed reporting. You can reach Melina and the team at [email protected].

John Downing: 'Neither Leo nor Micheál will win any votes from people waiting for broadband after six years'

Opinion | You’re About to Get Fewer Robocalls. But Maybe Not for Long.