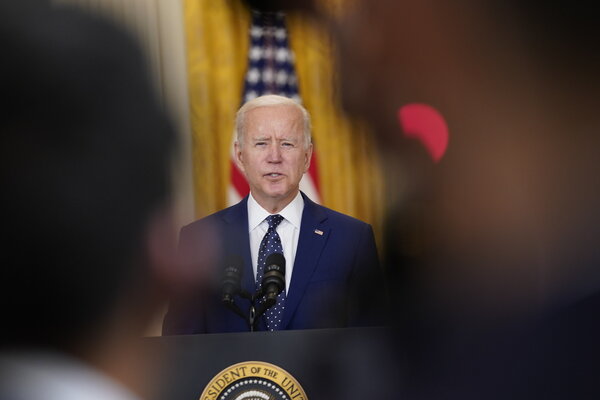 The Biden administration yesterday announced new sanctions on Russia over the hacking and election interference by its government. The measures aim to choke off lending to the Russian government as part of a broad effort to give more teeth to financial sanctions — though in the past, penalties have failed to deter Russian activity.

Separately, the C.I.A. has concluded that Russia covertly offered payments to militants to encourage killings of American and coalition troops in Afghanistan. The Biden administration stopped short of inflicting sanctions on any Russian officials over the suspected bounties.

Russian response: The Foreign Ministry’s spokeswoman said a response would be “inevitable” but did not immediately disclose what it would entail.

Impact: In early trading in Moscow before the announcement, the ruble’s exchange rate to the dollar dropped about 1 percent, reflecting nervousness over how the measures would play out. Analysts say the pandemic and the drop in the global price of oil have left Russia’s economy more vulnerable to sanctions.

Covax, the W.H.O.-led effort to promote Covid-19 vaccination in the world’s lowest-income countries, is trying to raise an additional $2 billion to help secure access to doses before they are snapped up by wealthier nations. The U.S. has already pledged $2 billion to the initiative in 2021, with another $2 billion to come next year.

The money would go to reserve future production capacity to supply nations that have either had not enough doses or, in some cases, none at all. A fund-raising event brought in more than $380 million in pledges, most of it from Sweden, with smaller amounts coming from other countries and private foundations, including one sponsored by Google.

Leaders of the effort have also appealed to wealthier countries to donate a portion of their own vaccine supplies, to help rectify a vast and growing inequity in global distribution between richer and poorer parts of the world. New Zealand announced it would donate enough doses for 800,000 people in lower-income countries.

By the numbers: More than 841 million vaccine doses have been administered worldwide, about 11 doses for every 100 people. But many poorer countries are yet to report a single dose.

Though he later walked back his comments, a leading member of Japan’s governing party said that the country would consider canceling the Tokyo Olympics if rising coronavirus cases are not brought under control.

Vaccines remain partisan in the U.S.: Two-fifths of Republicans say they do not plan to receive any vaccine, while two-thirds of Democrats report having had at least one dose.

Despite dire predictions, the number of suicides in the U.S. fell by 5 percent last year, although the decline appears to have been concentrated among white Americans.

The race to replace Angela Merkel

In less than six months, Germans will cast their ballots for a new chancellor. But who will step into the political vacuum left by Angela Merkel’s departure remains unclear, as Germany’s conservatives vie to replace her.

Ms. Merkel’s heir apparent, Armin Laschet, who was elected in January to lead the Christian Democratic Union, has found himself unexpectedly pitted against Markus Söder, the more popular head of a smaller, Bavaria-only party, the Christian Social Union, in a kind of conservative family feud.

Experts and party members alike are calling for the dispute to be resolved within the coming days, as it risks damaging the reputation of the two sister conservative parties, jointly referred to as the Union. The two parties operate as one on the national stage and must choose one candidate for chancellor.

Analysis: “At the end of the day, both have to decide between themselves. There is no set procedure that clearly defines how this will end,” said Thorsten Fass, a political scientist at Berlin’s Free University. But the fight will leave damage that will need to be repaired, he added: “It is not a good way to start an election year.”

The release of body camera footage showing a 13-year-old boy, Adam Toledo, being shot by a police officer has set off a fresh round of consternation over police conduct in Chicago, even as it stirred debate over what the images actually showed.

Iran and the other signatories of the 2015 nuclear deal yesterday resumed negotiations to revive the accord, though the atmosphere was fraught after the apparent Israeli attack on a major uranium enrichment site in Iran.

Parliament in France yesterday passed a contentious security bill that extends police powers, despite criticism from political opponents and civil rights activists who warn that, in the wrong hands, the law could become a dangerous weapon of surveillance and repression.

Derek Chauvin, the former Minneapolis police officer accused of killing George Floyd, declined to testify in his own defense. The trial is set to move to closing arguments.

The U.S. economy is poised for a robust comeback. Jobless claims in the U.S. fell last week to their lowest level of the pandemic, and retail sales surged 9.8 percent in March, up from a 3 percent drop in February. Stocks rallied to new highs.

Prince Philip’s funeral, scheduled for Saturday afternoon, will be subject to significant coronavirus restrictions but will reflect his preferences and distinguished military career.

An international coalition of 35 children’s and consumer groups called on Instagram to scrap its plans to develop a version of the popular photo-sharing app for users under 13.

A new study suggests there may have been as few as 20,000 adult Tyrannosaurus Rexes on Earth at any given time, a distribution equivalent to two adults in an area the size of Washington, D.C.

Neglected by art history for decades, Jo van Gogh-Bonger, Vincent van Gogh’s sister-in-law, above, is finally being recognized as the force who opened the world’s eyes to his genius.

She was small in stature and riddled with self-doubt, had no background in art or business and faced an art world that was a thoroughly male preserve. But without her efforts, the painter’s work would almost without question have subsisted eternally in a netherworld of obscurity.

The celebrity endorsement, made good

Shilling stars used to be accused of “selling out.” Now they’re hailed as savvy investors and giving the performances of their careers, writes my colleague Amanda Hess, a critic at large for The Times. This is an excerpt.

Not too long ago, stars aligning their images with multivitamins or prepaid debit cards might have been eyed skeptically, their efforts coded as a cynical money grab (George Clooney for Nespresso) or a pitiful last resort (the Joan Rivers Classics Collection for QVC). When celebrities cashed in, they also risked diminishing their credibility as serious artists.

Now the opposite is true. Stars are respected for how much profit they can generate, even if the stuff they’re selling is inexpensive. This does not in any way compromise their mystique. That is how, over the past decade-and-a-half, the prevailing cultural interpretation of the Kardashians moved from dismissing them as idiot shills to regarding them as secret geniuses.

Instagram is, for all intents and purposes, Millennial QVC. Tap on an Instagram photo and a bouquet of brand names blooms atop it, the social-media version of QVC’s onscreen info boxes.

The difference is that now, you don’t have to pick up the phone to buy something, because you’re already on your phone. The new home shopping network backdrop is the celebrity’s home itself. And there is very little shame attached to any of it.

The classic Venetian dish of rice and peas known as risi e bisi needs no improvement — but there’s a case to be made for adding coins of baby zucchini.

We seem to be heading into a new jeans cycle, where wide-legged or even baggy jeans for women and men are poised to become a hallmark of the postpandemic world.

That’s it for today’s briefing. Have a peaceful weekend. — Natasha

P.S. The Chinese Daily Briefing introduced a new writer today, Rong Xiaoqing, who will be breaking down the big debates in Chinese communities in the U.S. every week. Sign up here.

The latest episode of “The Daily” is about the pause in the Johnson & Johnson vaccine.

Declan Lynch: 'Alien territory for a candidate who says what she thinks'