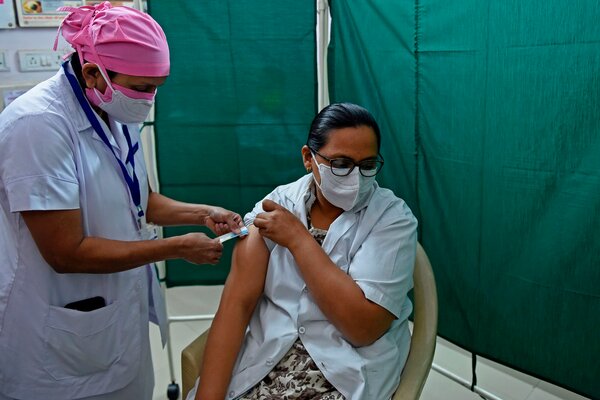 The two — one made by AstraZeneca and Oxford University and the other, developed in India by the company Bharat Biotech — were given the green light on Sunday for emergency use.

India plans to begin a vaccination campaign in the first three months of the year that it hopes will cover about one-quarter of the population by August. The first 30 million people inoculated will be health care providers, then police officers and other frontline workers.

But the Serum Institute, the Indian drug maker that is producing the AstraZeneca-Oxford vaccine, has managed to make only about one-tenth of the 400 million doses it had committed to manufacturing before the end of the year.

India is ranked No. 2 in confirmed infections, behind the U.S. The pandemic has devastated the economy; unemployment is at a 45-year high. Education has been disrupted, leading to worries about the long-term effects on the country’s youth.

Taiwan has been successful against the coronavirus by holding fast to its entry restrictions and quarantines for much longer than many governments could.

Parts of England may face harsher restrictions in the coming weeks, Prime Minister Boris Johnson said on Sunday, as Britain confronts a surge in cases and hospitalizations linked to the more transmissible variant of the coronavirus.

The loss of smell and taste among some Covid-19 survivors is receiving new attention from scientists, who fear it may affect nutrition and mental health.

In recent weeks, China’s leader, Xi Jinping, has made a trade pact with 14 other Asian nations, a pledge to join other countries in reducing carbon emissions and a major investment agreement with the European Union.

And by doing so, he may be making it more difficult for President-elect Joe Biden to forge a united front against China’s authoritarian policies and trade practices. Enlisting allies against China is a central focus of the incoming U.S. administration’s plan to compete with Beijing and check its rising power.

Noah Barkin, a China expert in Berlin with the Rhodium Group, called the investment agreement in particular “a geopolitical coup for China.”

Context: The deals show the leverage that Mr. Xi has because of the strength of the Chinese economy, which is now the fastest-growing among major nations as the world continues to struggle during the pandemic.

The murder of a military prosecutor, a doctor, a journalist — all within weeks — offer a glimpse into the targeted killings of community leaders and off-duty security forces that have wracked Afghanistan for months.

Most officials believe the Taliban are behind the attacks, but others fear that factions are using chaos as a cover to settle scores. Often, no one claims responsibility for the deaths.

The purpose of the killings appears to be to terrorize Afghan society into submitting to whatever terms emerge from peace talks, whether that is a peace agreement or a civil war. And the deaths are a worrying sign of how much remains unsettled as U.S. troops prepare to withdraw.

Related: Peace talks between the government and the Taliban are scheduled to reconvene on Tuesday in Qatar, but the details of what’s being negotiated next remain murky. Here’s what to expect.

For years, Asian-Americans have been written off by both Democrats and Republicans as a small group of infrequent voters. But the increase in Asian-American votes was so significant in the November election that they could play a decisive role in the two Senate runoff races in the state of Georgia this week.

These votes remain very much up for grabs by either party, our reporter found. Above, President-elect Joe Biden at an event with Asian-Americans in Las Vegas in February.

U.S. politics: President Trump demanded that Georgia’s secretary of state, a Republican, “find” him enough votes to overturn the presidential election, and vaguely threatened him with “a criminal offense,” during an hourlong telephone conversation on Saturday, according to audio excerpts from the conversation.

Julian Assange: A British judge plans to rule today on whether the WikiLeaks founder should be extradited to the U.S. to face charges of violating the Espionage Act and hacking government computers stemming from his obtaining and releasing confidential documents that exposed crimes and wrongdoings committed by U.S. forces in Iraq and Afghanistan.

Pakistan attack: Armed men abducted and killed at least 11 coal miners in southwestern Pakistan early Sunday. All of the victims were ethnic Hazaras, a minority Shiite group that has often been the target of Sunni extremists.

Tesla: Elon Musk’s electric car company reported that it had produced more than half a million cars in 2020. Tesla ramped up production at a factory in China, which has fueled sales growth in that country, the world’s largest market for both conventional and electric cars.

Snapshot: Above, Kai Jones leaping off a cliff in Jackson Hole, Wyo. The 14-year-old ski daredevil is already a pro, soaring off mammoth cliffs and doing double back flips. He concedes, “I always say to myself, ‘How far can I push it and not make my mom scared?’”

Cook: This flaming baba au rhum is an afternoon project with delicious, sophisticated results. In the video accompanying the recipe, Melissa Clark takes you through every step of making and baking the rich, airy yeast dough, and then setting it on fire.

Watch: The BBC television movie “Elizabeth Is Missing” features Glenda Jackson’s first screen performance since 1992. The renowned actress stars as a woman fending off dementia while she searches for a lost friend.

Do: For many people, 2020 was not a year for saving money. Here’s how to get a handle on your finances in the new year, and employ a few tricks to help keep your spending down.

We’ll try to help you make those New Year’s intentions stick with our At Home collection of ideas on what to read, cook, watch and do while staying safe at home.

When the pandemic is over

The rollout of vaccines around the world signals the start of a hopeful chapter after nearly a year of lockdowns, restrictions and social distancing. Now that imagining an “after time” seems possible, we asked readers to share their “firsts” — the first things they plan to do when the world returns to normal. Here are some of their answers.

“Hug my grandmother real tight. I visited her once, but I just waved at her outside her room and then she responded by asking who I was. I lowered my mask to show her my face, and she asked me to come closer. I said I couldn’t.”

“I want to go to my home country, Peru, to see my mom and my dad’s ashes. He died in November, and I couldn’t give him a hug goodbye for fear of traveling there during the pandemic.”

… and getting away from them

“I’m hiring a babysitter and going out dancing.”

“I am 85 years old. When the pandemic began, I was 84, and when it ends I will probably be 86. Two years at the end of one’s life are rather valuable. What I’d like to do is fly to Boston and walk the Freedom Trail; drive to Maine and find a lobster shack; and visit Egypt to sail down the Nile.”

P.S.
• We’re listening to “The Daily.” Our latest episode is on the story of the 1964 earthquake in Alaska.
• Here’s our Mini Crossword, and a clue: Fuzzy fruit (five letters). You can find all our puzzles here.
• Arthur O. Sulzberger Jr. retired as chairman of The New York Times Company on Dec. 31. and handed over the reins to his son, A.G. Sulzberger, the publisher of The Times.

Opinion | Does the Senate Represent America?

Opinion | What Is Wrong With Afghanistan’s Peace Process