The U.S. Covid toll nears half a million.

We’re covering the coming U.S. milestone of 500,000 deaths from Covid-19, the worst day of violence in Myanmar since the coup and new roles for women in Bollywood movies. 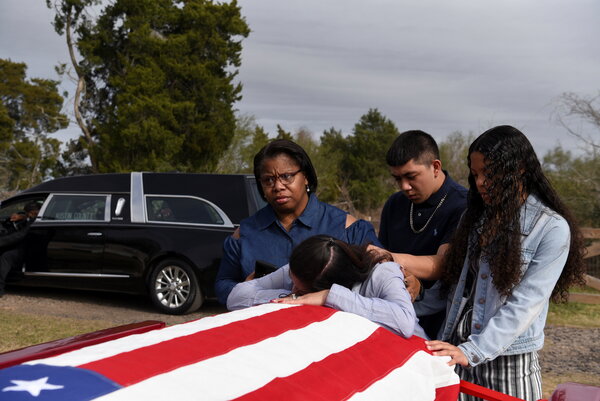 More Americans have died of Covid-19 than on the battlefields of World War I, World War II and the Vietnam War combined. No other country has counted so many deaths in the pandemic.

As of this writing, the U.S. toll stood at 497,403, about a fifth of the known global toll — roughly one year since the country’s first confirmed Covid-19 death. The coronavirus has reached every corner of the U.S., devastating dense cities and rural counties alike, and has killed about one in 670 people in the country. Virus variants are an increasing threat and grief is widespread.

“When I go inside, it’s a surreal moment and there’s always this hope,” said Ignacio Silverio, who lost his sister, a restaurant owner, to Covid. “You know, maybe it’s all a dream and she would greet me and we would sit down together and drink coffee.”

The harrowing milestone nevertheless comes at a hopeful moment. New virus cases are down sharply, deaths are slowing, and vaccinations are picking up after a week in which much of the country was staggered by winter storms. President Biden said the U.S. could near normalcy by year’s end, though Dr. Anthony Fauci, the country’s top epidemiologist, said that mask-wearing might be necessary into 2022.

Australia began vaccinating its population against the coronavirus on Sunday, with Prime Minister Scott Morrison and 19 others getting their shots. The first to be vaccinated was an 84-year-old woman who lives in a nursing home.

People in Canada are calling out not just politicians and doctors for breaking coronavirus rules, but also their own relatives and neighbors. So-called snitch lines have been flooded with tips.

As new variants of the coronavirus spread rapidly, countries in Europe are moving to reintroduce border controls, a practice that is chipping away at what was once the world’s largest area of free movement.

Witnesses said two people were killed and dozens wounded when security forces on Saturday opened fire on protesters in the city of Mandalay. It was the bloodiest day of protests against the coup so far.

The shootings occurred as the authorities were trying to force workers back to their jobs at a local shipyard. A work stoppage there in protest of the ouster of Daw Aung San Suu Kyi, Myanmar’s civilian leader, had paralyzed river transport on the Irrawaddy, the country’s most important commercial waterway, according to Radio Free Asia.

Details: The authorities used water cannons, rubber bullets, tear gas, slingshots and ultimately live ammunition to break up the crowd. At least 40 people were wounded, according to medics.

Russian dissent and the internet

For years, the Russian government has been putting in place the infrastructure to clamp down on freedom of speech online. Many predicted that Russia was headed toward internet censorship similar to China’s great firewall.

But even as President Vladimir Putin faced big protests last month, his government appeared unwilling — and, to some degree, unable — to block websites or limit the spread of digital dissent.

Putin’s dilemma: He can continue trying to manage public discontent by maintaining some semblance of an open society, or he can raise state repression to new heights, risking a public backlash.

Bollywood’s onscreen mothers have long been depicted as passive housewives who bow to patriarchal pressures. But that’s changing, with films like “Tribhanga,” above, which covers topics like single motherhood, sexual abuse and open relationships.

In fact, a number of new productions are showing mothers, and women overall, as full and complex human beings — not melodramatic side characters, but outspoken, independent leads who are in charge of their own fates.

Israel election: The election next month has the potential to give the country’s Arab voters real power. Prime Minister Benjamin Netanyahu is now vigorously courting the Arab Israeli electorate, and some Arab politicians are prepared to work with him.

Aleksei Navalny: A Russian court has cleared the way for the possible transfer of the opposition leader to a penal colony, the latest step by the authorities to silence the country’s most vocal critic of President Vladimir Putin.

Libya weapons: Erik Prince, the former head of the security firm Blackwater Worldwide and a supporter of former President Donald Trump, violated a United Nations arms embargo on Libya by sending weapons to a militia commander who was trying to overthrow the government in Tripoli, according to U.N. investigators.

What we’re reading: This summary of the last episode of the BBC series “Trump Takes On the World,” in which we learn that the former U.S. president offered Kim Jong-un, North Korea’s leader, a ride home on Air Force One after their summit in Hanoi. The bromance was real, at least from Mr. Trump’s perspective.

Cook: This shrimp étouffée draws inspiration from both Cajun and Creole cuisines.

Listen: Radio drama, especially from its golden age in the 1930s through the ’50s, is freely available, thanks to the internet. Here are six shows to enjoy.

Do: Thinking of buying an electric car? They’re available in many sizes, shapes and prices. Here’s a roundup.

Find something that will bring you laughter. At Home has ideas on what to read, cook, watch, and do while staying safe at home.

A graphic on Sunday’s front page of The New York Times depicts the totality of Covid’s devastation in the United States. From afar, the graphic looks like a blur of gray, but up close it shows something much darker: close to 500,000 individual dots, each representing a single life lost to the coronavirus.

This is not the first time The Times’s designers have used the front page to represent the scale of the pandemic’s toll. When Covid-19 deaths in the United States reached 100,000 last May, the page was filled with names of those lost — nearly a thousand of them, just 1 percent of the country’s toll then.

And as that number approached 200,000, the lead photograph on the page showed the yard of an artist in Texas, who filled his lawn with a small flag for every life lost to the virus in his state.

But this is the first time the front page has depicted all of the U.S. fatalities. “I think part of this technique, which is good, is that it overwhelms you — because it should,” said Lazaro Gamio, a graphics editor at The Times.

P.S.
• We’re listening to “The Daily.” Our latest episode is on children and Covid.
• Here’s our Mini Crossword, and a clue: Cold War superpower (four letters). You can find all our puzzles here.
• Claire Cain Miller, a reporter who worked on our series on working mothers, “The Primal Scream,” spoke to NPR about the toll of the pandemic on women.

Opinion | How Mueller Can ‘Fix His Mistakes’