Good morning. We’re covering major shifts in Israeli politics, a new variant in Vietnam and the most infamous prison in Myanmar. 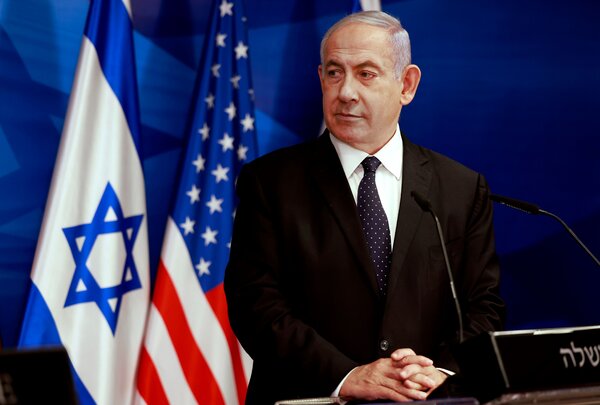 Israel is moving toward a government coalition deal that could sideline Benjamin Netanyahu, the country’s longest-serving prime minister.

An ultranationalist power-broker, Naftali Bennett, said on Sunday that his political party would work with seven others to build a coalition, a move that would supplant Netanyahu’s right-wing Likud party. Netanyahu fired back, calling the proposed coalition “a government of capitulation.”

It would be an uneasy alliance. The emerging coalition would include both leftist and far-right members, and the prime minister’s post would rotate between Bennett, a champion of the religious right who rejects the concept of a sovereign Palestinian state, and Yair Lapid, a voice of secular centrists.

Their government would also rely on the support of a small Arab Islamist party, Raam, which has roots in the same religious stream as Hamas, which controls the Gaza Strip. Raam is not likely to play a formal role in the coalition, but is expected to support the new government at the Knesset confidence vote.

Context: Supporters hope the proposed coalition could break the deadlock that has stymied government action in Israel for more than two years. Leaders of the proposed coalition have indicated that they plan to first focus on infrastructure and economic policy instead of divisive issues such as those related to the Israeli-Palestinian conflict.

Netanyahu: No matter the outcome, Netanyahu has left a lasting legacy. He shifted Israeli politics firmly to the right and presided over the dismantling of the Israeli-Palestinian peace process, while scoring groundbreaking diplomatic agreements with four Arab states. But by frequently attacking the judiciary and remaining in office while on trial for corruption, Netanyahu also stands accused of undermining central tenets of liberal democracy.

A new variant in Vietnam

Vietnam discovered a new variant of the coronavirus, which the country’s health minister said was a mix of the variants first detected in India and Britain. He called the variant “very dangerous” and said it was more contagious, Reuters reported.

The health minister, Nguyen Thanh Long, said laboratory tests indicated that the variant replicated itself very rapidly and that it could potentially explain the surge of cases in Vietnam. The country is coping with its worst outbreak yet.

It is not immediately clear how fully the new variant is understood. Scientists do not know whether it replicates as rapidly in real-world conditions as it does in the lab. They do not know how prevalent it may be. And they are still trying to understand whether it may evade the protections afforded by vaccines or natural immunity from a different version of the virus.

Rapid response: Vietnam announced new restrictions for Ho Chi Minh City on Sunday after an outbreak was traced back to a church. The country also enacted a ban on all religious events nationwide.

Regional look: Other Southeast Asian countries are also battling their worst outbreaks to date. Taiwan, another success story from last year, is also experiencing its worst outbreak. Vaccinations are rolling out slowly across Asia.

Officials in Guangzhou, China, locked down a neighborhood to try to contain a cluster of cases.

Several automakers temporarily shut down plants in Chennai, known as India’s Motor City, after threats of strikes over coronavirus fears.

Japan has extended a state of emergency in Tokyo and eight other prefectures until at least June 20, barely one month before the Olympics are scheduled to begin.

For 134 years, Insein Prison — pronounced “insane” — has stood as a monument to brutality and authoritarian rule in Myanmar. British colonizers had built it to subjugate the population, and the military dictatorship that ruled from 1962 to 2011 used it to torture and suppress political prisoners.

Now, with the military back in control after a Feb. 1 coup, the aging building has become a central part of the crackdown against the pro-democracy movement. Hundreds of journalists, elected leaders and protesters have been crammed in to the overcrowded structure.

History: Under the former dictatorship, political prisoners told The Times that they were frequently beaten and sometimes burned, given electric shocks, forced to crawl across jagged rocks and locked in kennels intended for dogs.

Journalists: In March, the authorities arrested Nathan Maung, an American citizen, and Hanthar Nyein, co-founders of the online news site Kamayut Media. Another American journalist, Danny Fenster, the managing editor of Frontier Myanmar, was arrested on Monday at the Yangon airport as he prepared to leave the country and was taken to the prison.

Taiwan’s worst drought in more than half a century has deepened in recent weeks, nearly draining its major reservoirs and contributing to two severe electricity blackouts.

For half a year, mice have plagued the Australian eastern grain belt, leaving economic and psychological scars.

Cameos by Justin Bieber, Lady Gaga and BTS — all previous targets of Beijing’s ire — mysteriously disappeared from the reunion episode of “Friends” when it streamed in China on Thursday.

James Matthew Bryant, a New Zealand fugitive, chartered a helicopter to turn himself in to the police after spending eight days doing yoga in the middle of the forest.

The French Open began on Sunday, and Naomi Osaka prepared for a challenge.

An Indigenous community in Canada said it had evidence that 215 children were buried in a mass grave on the grounds of a school where they were forcibly assimilated.

Iran will try a detained French citizen on charges including espionage, a crime that can carry the death penalty.

In the fall, the Medici Chapel in Florence embarked on a secret experiment to use grime-eating bacteria on Michelangelo’s masterpiece marbles. It worked.

Turkey’s president, Recep Tayyip Erdogan, is under immense political pressure over the country’s collapsing economy. Now, even villagers in his home province of Rize have turned against him over his plan to build a quarry that could destroy 220 acres of woods and pollute resources.

A celebration of architecture

Twice delayed by the pandemic, the Venice Architecture Biennale is finally underway. The theme, “How Will We Live Together?,” turned out to be prescient. Many of the answers look back at ways that countries have built to weather earlier challenges.

Some honor innovative solutions to earlier housing challenges, with an eye toward the challenges of climate change. The U.S. pavilion recalls the timber-frame houses that were built by many Americans as they moved West, while the Finnish pavilion honors the prefabricated wood homes built to address an internal refugee crisis during World War II.

Other exhibits celebrate togetherness. The Philippines pavilion is inspired by the lightweight nipa hut, which villagers could carry on their shoulders, a design rooted in bayanihan, the idea of communal support. Simón Vélez, a Colombian architect, built a pop-up Majlis, or communal gathering place, as the cornerstone of a temporary nomadic village.

“The biennale used to be the place where Europe showcased what’s good and what’s bad; it taught the world,” Hashim Sarkis, the show’s curator, said. “Now it’s the other way around.”

David Chang’s bo ssam recipe is a straightforward way to achieve high-level excellence in the kitchen.

These five new horror movies will keep you entertained and maybe up all night.

Celebrate Asian Pacific American Heritage Month with these activities inspired by traditional games and crafts. (My colleagues wrote a lovely essay about how the project connected them with their heritage.)

Here’s today’s Mini Crossword, and a clue: Use an e-cig (four letters).

That’s it for today’s briefing. See you next time. — Amelia

P.S. Carl Zimmer, one of our science reporters, talked to WNYC about the different coronavirus origin theories within the scientific community.

There’s no new episode of “The Daily.” Instead, listen to the new Times podcast “Day X,” about an alleged far-right plot to bring down the German government.

Whet Moser wrote today’s Arts and Ideas section. You can reach Amelia and the team at [email protected].