Good morning. We’re covering turmoil in Haiti, protests in Cuba and a warning on the Johnson & Johnson vaccine. 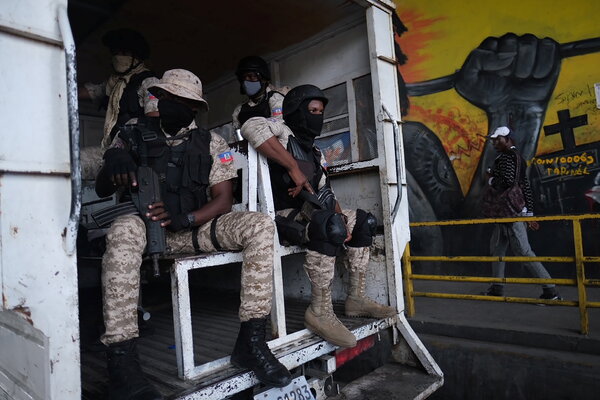 Haiti is feverishly searching for answers after the assassination of President Jovenel Moïse last week, while the public remains skeptical of official narratives. Here are live updates.

The police have arrested a Haitian-born doctor based in Florida, Christian Emmanuel Sanon. The national police chief indicated that he believed Dr. Sanon, 63, was plotting to assume the presidency, but offered no explanation for how the doctor could possibly have taken control of the government.

Haitian officials have also implicated at least 20 Colombians, describing them as centerpieces of a well-organized plan carried out by “foreign mercenaries.” Officials say Dr. Sanon hired a private Florida security company that recruited at least some of the Colombians. But their role in the killing, if any, is murky.

The biggest protest movement in decades is sweeping Cuba, as thousands of citizens took to the streets on Sunday to protest power outages, food shortages and a worrying lack of medicine.

The island faces a dire economic crisis, as the coronavirus pandemic has cut off crucial tourism dollars. People wait in line for hours to buy food. Many have been unable to work, and families are growing desperate. The country, known for quashing dissent, has not experienced protests of this scale in nearly 30 years.

Quotable: “I took to the streets because I’m tired of being hungry,” said Sara Naranjo, a demonstrator, in a video shared on Twitter. “I don’t have water, I don’t have anything,” she said. “You get bored, you get tired, we are going crazy.”

Cuba’s reaction: The government attributes its longstanding economic problems to the American trade embargo, which cuts off its access to financing and imports. Cuba’s president, Miguel Díaz-Canel Bermúdez, blamed the U.S. for an underhanded campaign to exploit peoples’ emotions.

U.S. reaction: President Biden called on the Cuban government to heed the demonstrators’ demands. “We stand with the Cuban people and their clarion call for freedom,” he said in a statement. Democrats and Republicans alike spoke out in support of the demonstrations.

The U.S. Food and Drug Administration will warn that the Johnson & Johnson vaccine can lead to a rare neurological condition known as Guillain-Barré syndrome. The announcement could come as early as Tuesday.

The risk is extremely low: Officials have identified about 100 suspected cases out of nearly 13 million people in the U.S. who received the shot. One recipient, a 57-year-old man who had both a stroke and a heart attack within the last four years, died in April.

U.S. context: The F.D.A. has decided that its benefits strongly outweigh the risk. Still, the news is the latest setback for the vaccine, which has been largely sidelined in the U.S. by manufacturing and safety issues. Millions of doses are sitting unused and will expire this summer, as the national pace of vaccination has slowed.

Officials will most likely extend the lockdown in Sydney, Australia.

England will go forward with its plan to lift most remaining coronavirus restrictions on July 19, despite rising case numbers.

Migrant workers in South Asia are stranded, unable to return to jobs or gain access to vaccines.

Fox News continues to spread misinformation about shots, even as outbreaks spread among unvaccinated Americans.

Gen. Austin Miller stepped down as the leader of the U.S. force in Afghanistan, a big transition as the Taliban gains more territory.

Nepal stripped its prime minister of his duties and reinstated the Parliament that he had twice dissolved in recent months.

A Jordanian court sentenced two men close to King Abdullah II to 15 years in prison for trying to destabilize the monarchy.

The E.P.A. approved the use of “forever chemicals” for fracking in 2011, a new report shows, despite its own concern about toxicity and health risks.

A group of Texas Democrats fled the state in a last-ditch effort to block a restrictive voting law by preventing Republicans from attaining a necessary quorum.

An out-of-control wildfire has scorched more than 150,000 acres in Oregon, threatening the power grid and displacing residents.

The Biden administration will send most families up to $300 a month per child, a progressive milestone that aligns the U.S. with many other rich countries.

Over the past 10 years, a treasure hunter in Poland has used a metal detector to unearth relics of Europe’s bloody past, finding wreckage from Napoleon’s campaigns to World War II. His most recent discovery — silver coins from the Viking era, minted by the medieval rulers of what is now France — has startled scholars and opened new questions about early trade and extortion.

At 87, the primatologist, educator and activist Jane Goodall is staying hopeful and sharing reflections about ethics, political posturing and plodding on to make the world a better place.

Have you ever wondered if tapping into fear and anger might be useful in telling stories about the planet and conservation?

No. It’s one of my big complaints when I talk to the media: Yes, we absolutely need to know all the doom and gloom because we are approaching a crossroads, and if we don’t take action it could be too late. But traveling the world I’d see so many projects of restoration, animal and plant species being rescued from the brink of extinction, people tackling what seemed impossible and not giving up. Those are the stories that should have equal time, because they’re what gives people hope.

Are there ideas you have about conservation that you feel are too radical to express publicly?

Absolutely. I would never approach people about the crisis of billions of animals in the factory farms and say you’ve got to be vegan. People have to change gradually.

Are chimps capable of evil?

This is a very interesting philosophical conversation, and I’ve thought about it a lot. My definition is that only humans can be evil. Chimpanzees can be brutal, violent, aggressive. But my definition of evil, it’s when you can plan attacks on those who aren’t there and then carry them out in cold blood. Chimps don’t plan like that.

Read her interview with my colleague David Marchese here.

Among Palestinians, mussakhan is a beloved roast chicken dish.

Here’s today’s Mini Crossword, and a clue: Right away (4 letters).

That’s it for today’s briefing. See you next time. — Amelia

P.S. A hidden haiku from a Times interview with Jeanie Buss, the Los Angeles Lakers owner and standup comic: “These things happen and / you feel like you’re alone, but / people can relate.”

The latest episode of “The Daily” is on reparations in Evanston, Ill.

You can reach Amelia and the team at [email protected].

Gene Kerrigan: 'It's not about justice, it's about tidy desks'

Commentary: Why a Republican won’t beat Trump in 2020