We’re covering the final moments ahead of a Brexit deal, the coronavirus’s effect on holiday celebrations and the many innovators and thinkers we lost this year. 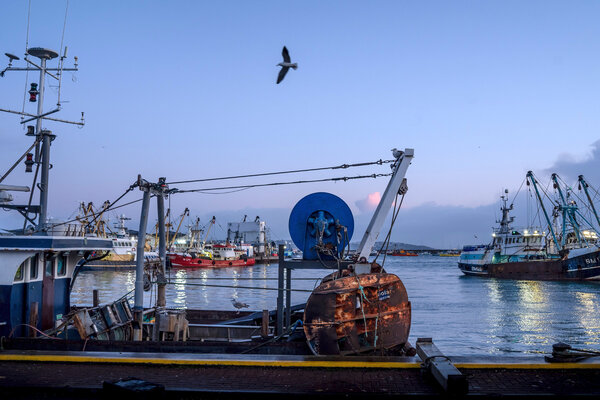 A last-minute scramble ahead of a Brexit deal

Britain and the European Union appeared on the cusp of a post-Brexit trade agreement late Wednesday, with negotiators in Brussels having all but resolved the final issues, a person briefed on the talks said. An announcement is expected to come Dec. 24, a week before the Dec. 31 deadline for Britain and the E.U. to negotiate long-term trade arrangements.

Negotiators were scrambling to finish their talks in part to avoid the danger that the deal might not be adopted in time for Jan. 1. Without a deal in place, Britain and the European Union would default to trading under World Trade Organization rules, levying tariffs on each other’s goods.

Official remarks: Eric Mamer, a spokesman for the E.U.’s executive arm, the European Commission, posted on Twitter after midnight local time that work on the agreement would “continue throughout the night,” adding that “hopefully,” it would be an “early start tomorrow morning.”

How the coronavirus stole Christmas

Across Italy and beyond, many people were looking forward to Christmas with loved ones to soothe the heartache of a year of mourning. But with a surge in infections, mounting numbers of deaths and new lockdowns dashing those hopes, “home for the holidays” has taken on an ominous meaning: There is nowhere else to go.

Similar restrictions are in place across the rest of Europe, including in Germany, where Chancellor Angela Merkel urged the public to avoid family visits.

In the U.S., where case numbers are about as bad as ever, the country is on pace to reach 325,000 deaths before Christmas. Even with the promise of new federal aid, many jobless Americans are facing a holiday of tough choices, trying to celebrate while dealing with pressing financial needs.

The British government on Wednesday ordered that more sections of England be placed under restrictive lockdown.

The Vatican said that it was “morally acceptable” to receive Covid-19 vaccines tied to research involving fetal tissue derived from abortions, as long as there was no alternative.

The Trump administration and Pfizer reached a deal for an additional 100 million doses of the coronavirus vaccine to be delivered to the U.S. by the end of July.

In Nigeria, a business opportunity born out of tragedy

For years, police officers in the West African nation of Nigeria have tortured, killed and extorted young people, accusing them of being criminals, according to many testimonies in hearings and studies.

Some — among them human rights group, lawyers and pastors — have sensed a business opportunity in these disappearances, wringing money from desperate families who often have already paid large bribes to the police.

Quote: “They give you a prophecy that he will come back,” said the mother of one victim. “Whatever they tell you to do, you do it.”

#EndSARS: Nigeria’s young people have finally had enough, and in October, the biggest protests in a generation erupted against the country’s police and armed forces.

A one-man aid organization. A teacher’s door-to-door hugging operation. And about 2,000 house calls to feed and care for hundreds of cats and a rabbit.

We asked our correspondents around the world to share stories like these that speak to the strength of the human spirit, and to the way that disruption can bring out the best in us.

U.S. politics: President Trump threatened to veto a much-needed stimulus bill, demanding that Americans get $2,000 in direct payment instead of $600. Now in the final weeks of his presidency, Mr. Trump remains the most powerful man in the world, albeit one who is unhappy, unleashed and unpredictable.

China-E. U. deal: Negotiations between China and the European Commission that aim to roll back restrictions on investment have hit yet another snag after a tweet from a top aide to Joe Biden indicated that the president-elect was not happy about the deal.

Police in France: A heavily armed gunman in central France killed three police officers responding early Wednesday to reports of domestic abuse, in a rare outburst of deadly violence against the French security forces; a local prosecutor described it as a “war scene.”

Snapshot: Above, members of the band Molchat Doma in Minsk, Belarus, this month. Their music — at once bleak, yet danceable — was the soundtrack to a traumatic year, especially since many of their tracks went viral as the backdrops for videos on TikTok.

Lives lived: Cecilia Chiang, the chef and restaurateur who escaped war in China and transformed America’s perception of Chinese cuisine, was among the many people the world lost this year. The New York Times Magazine wrote about Ms. Chiang, and other artists, innovators and thinkers, in its annual collection of obituary essays.

Letters to the Editor: 'We need to raise awareness and tackle scourge of obesity'