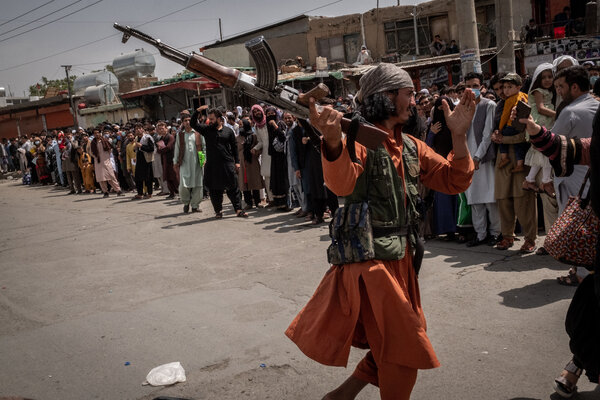 The Taliban met their first protests with violence

Afghanistan’s new rulers fired into the crowd in the northeastern city of Jalalabad and beat protesters and journalists. Demonstrators opposed to Taliban rule also took to the streets in Khost, in the southeast. Here are the latest updates.

Al Jazeera reported that at least two people were killed and a dozen injured during the protests in Jalalabad, which was seized by the Taliban four days ago without much of a fight. Hundreds marched through a main shopping street, carrying flags of the Afghan Republic.

In Kabul, the Taliban moved to form a government as President Ashraf Ghani surfaced in the United Arab Emirates, saying he had fled Afghanistan to avoid a lynching by the Taliban and vowed to return.

Scramble to leave: Chaos erupted outside the airport in Kabul as more people tried to flee. A Taliban commander told crowds that the gate to the airport was closed except for foreigners and for people with documents. Inside, 5,000 U.S. troops were stationed to evacuate people. Afghan women who worked with the U.S. or international groups are frantically erasing any trace of those links for fear that they will be targeted by the Taliban.

The view from Beijing: For China’s leaders, the chaotic scenes in Afghanistan have served as a vindication of their hostility to American might. But the Taliban could also create new geopolitical dangers and security risks.

Difficult path for refugees: European countries were hesitating to take in Afghans after the surge in populism and the far right that followed the influx of Syrian refugees in 2015.

Israel’s swift vaccination campaign quickly brought life back to normal. Coronavirus cases plummeted, and, by March, concerts and sporting events opened up to the vaccinated.

But a fourth wave of infections is threatening to ruin Israel’s progress. The daily rate of new virus cases has more than doubled in the past two weeks, making Israel a rising hot spot. Some are blaming the new government for not taking action quickly enough.

Restrictions were reinstated this week, and the government is considering a new lockdown. “The vaccinations were supposed to solve everything,” a public health expert said. Now, he said, it is clear that masks and crowd limits must be part of the approach.

Details: Over 8,000 new cases were reported on Monday, a six-month high, Haaretz reported. And after many days of zero Covid deaths in June, at least 230 people have died from the disease so far this month.

Explanations: It’s too soon to tell why things turned around so quickly, but experts say that Israel’s high rate of infections among early vaccine recipients indicates a waning of the vaccine’s protections over time. The highly contagious Delta variant, now the primary version of the virus in Israel, may have also made the vaccine less effective.

The Delta variant has ravaged Cuba’s health care system, which has long been a source of national pride.

In a public service ad, Pope Francis encouraged vaccination, calling it an “act of love.”

The death toll from the 7.2-magnitude earthquake that struck Haiti on Saturday has reached 1,900, and 10,000 people are injured. These maps and photos show the devastation.

And yet, in some parts of the country, like the village of Toirac, help seems distant. At least 20 people were killed there when a church collapsed, survivors said, and the area has yet to be visited by aid groups or emergency authorities.

“We’re on our own,” said a 66-year-old farmer in Toirac who lost his wife and his house.

Complicating rescue efforts was a deluge from Hurricane Grace.

An Indian court cleared Shashi Tharoor, an influential opposition politician, of charges in connection with the death of his wife. Tharoor had been accused of driving his wife, Sunanda Pushkar, to suicide, but the opposition party criticized the case as politically motivated.

Four student union leaders at the University of Hong Kong were arrested on suspicion of “advocating terrorism” after they had held a moment of silence for a man who stabbed a police officer and then killed himself.

Malaysia’s king said that he would name a new prime minister as soon as possible but added that whomever he appointed must seek a confidence vote in Parliament.

The world’s oldest bank, Banca Monte dei Paschi di Siena in Italy, faces a takeover after a test by regulators found that it was also Europe’s weakest lender.

The R&B star R. Kelly went on trial in New York City on charges of commanding a criminal enterprise that recruited women and underage girls to have sex with him.

What constitutes art sales under duress? A fight over a landscape painting bought for Hitler is focused on that question. The family of the Jewish art collector who sold the painting maintains that the 1938 sale was not voluntary.

The science of food

J. Kenji López-Alt, a food columnist for The Times, approaches home cooking like a scientist. He spoke with Times Insider about how his kitchen is also a lab. Here’s an excerpt.

How would you describe your approach to cooking?

I try to explain the science and technique behind home cooking. My thought is always that understanding science can help you become better at something.

How did you arrive at that view?

I’ve always been into science. My father is a scientist. My grandfather is a scientist, so that was part of my education growing up. After college, I was cooking in restaurants, and I had a lot of questions about why certain things worked the way they did. I eventually transitioned to doing recipe development at Cook’s Illustrated.

What kind of meals or recipes are you drawn to?

There’s a big difference between what I write about and what I cook at home. I cook based on how much time I have and whatever leftovers I have, and I make adjustments on the fly.

So you’re not a meal planner or a Sunday meal prepper?

No, I don’t know what we’re having for dinner tonight.

This one-pot coconut rice with shrimp and corn combines fresh shrimp with pops of corn and basil.

The documentary “In the Same Breath” from the director Nanfu Wang revisits the pandemic as it was unfolding in China as well as in the U.S.

In her new memoir, “All In,” Billie Jean King is as concerned with political and social issues as she is with tennis.

P.S. A fight between the writers Ernest Hemingway and Max Eastman ended up in The Times 84 years ago this month. Hemingway said he had slapped Eastman, who claimed to have thrown Hemingway over a desk.

The latest episode of “The Daily” is about the Haiti earthquake.

Wellness, work, and music — how it all comes together: Alan Cross

Ian O'Doherty: 'Delaney is a product of Official Ireland, for whom a bit of plámásing can excuse a multitude of sins'