We’re covering arson at Europe’s largest refugee camp, the institutional neglect and corruption that led to the Beirut explosion and President Trump’s admission that he played down the risks of the virus. 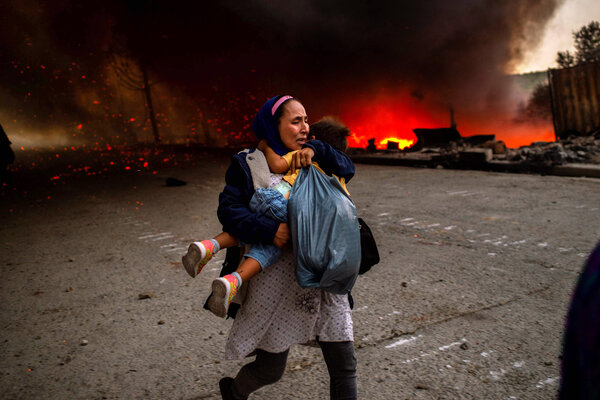 A fire destroys most of Europe’s largest refugee camp

With more than 12,000 people living in squalid conditions in a bleak tent camp designed for 3,000, Europe’s largest refugee camp, on the Greek island of Lesbos, has for years seemed at risk of a humanitarian tragedy.

On Tuesday night, that disaster came. Fast-moving flames razed much of the camp, known as Moria, leaving many residents homeless. The fires were intentionally started by a small group of camp residents, officials said, in protest of quarantine measures after at least 35 people tested positive for coronavirus at the camp.

Analysis: The pandemic has exacerbated a longstanding hostility between migrants and Greek islanders, who once welcomed the refugees. The government also tightened borders. Earlier this year, Greece abandoned more than 1,000 immigrants in rafts at sea. “This fire was expected,” Eva Cossé, a human rights researcher, told The Times. “It’s not surprising. It’s a testament to the European Union’s negligence and Greece’s negligence.”

The corruption behind the Beirut explosion

Late last year, a new security officer at the port of Beirut discovered what seemed like an urgent security threat behind a broken door: piles of fireworks, jugs of kerosene and thousands of tons of ammonium nitrate — in short, every ingredient needed to construct a devastating bomb. But when he warned his supervisors, he learned that many Lebanese officials already knew. Despite an order from a judge, no immediate action was taken.

Months later, on Aug. 4, an explosion tore through Beirut, killing more than 190 people, injuring 6,000 and causing billions of dollars in damage.

A Times investigation has revealed the years of corruption that led to the explosion. This, the team reports, was the result of neglect and bureaucratic buck-passing by a dysfunctional government that subordinated public safety to the more pressing business of bribery and graft.

Trump admits to playing down the virus

In early March, President Trump took to Twitter to describe the coronavirus as less lethal than the flu. But in private, according to the forthcoming book “Rage” by the journalist Bob Woodward, he was well aware of the risks, having been warned in January by his national security adviser that the virus represented the “biggest national security threat” of his presidency.

“You just breathe the air and that’s how it’s passed,” Mr. Trump told Mr. Woodward on Feb. 7. “And so that’s a very tricky one. That’s a very delicate one. It’s also more deadly than even your strenuous flu.” More than a month later, Mr. Trump said that he had wanted to play it down publicly. “I still like playing it down,” he said, “because I don’t want to create a panic.”

Here are five takeaways from the book and our critic’s review of it.

Response: Joe Biden, Mr. Trump’s Democratic opponent, excoriated the president over the report. “He knew and purposely played it down,” Mr. Biden said during a speech in Warren, Mich., on Wednesday. “Worse, he lied to the American people.”

In other virus developments:

France’s prime minister, Jean Castex, is self-isolating after coming into contact with the director of the Tour de France, who tested positive for the virus.

U.S. colleges that have reopened for in-person instruction are struggling to contain the spread of the virus. Experts say policies have broken down in ways that may put students and staff members at risk.

A new study reveals how the virus can invade brain cells, hijacking them to make copies of itself and sucking up all of the oxygen near the host cells, starving other cells to death.

An early lockdown spared the Italian island of Sardinia in the spring, but jet-setters — including the now-infected former prime minister Silvio Berlusconi — flocked there this summer, turning nightclubs into petri dishes and the island into a hot spot.

A photo of an older man having a meal in a pub in Galway, Ireland, started a national conversation about virus regulations and life’s simple pleasures.

The occasional crinkle of a food wrapper. A spontaneous burst of applause. And, of course, the resounding thwomp! of a ball hitting cleats, against a backdrop of otherwise scrupulous silence.

This is the soundtrack to sports events in Japan in the pandemic. While the major sports leagues in the U.S. and Europe play mostly before empty stands or cardboard cutouts, fans in Japan have been attending games since early July. But they’ve been asked to curb their enthusiasm to keep the coronavirus in check, and as with other containment measures in that country, most people have been complying, reports Motoko Rich, our Tokyo bureau chief.

Australia shark attack: Despite protective “shark nets” and drum lines offshore, a 46-year-old surfer died in the first fatal shark attack in 62 years at Greenmount Beach on the Gold Coast.

Boeing: The U.S. aviation giant said Tuesday that it expected deliveries of its 787 Dreamliner to be delayed as it and the Federal Aviation Administration looked into quality-control concerns with the wide-body jet. The plane’s relatively efficient fuel use has made it popular with airlines around the world.

Seafarers: At least 300,000 cargo workers have been stranded on their ships for months, working past the expirations of their original contracts and fighting isolation, uncertainty and fatigue.

Snapshot: The San Francisco skyline at 10:25 a.m. on Wednesday, above, with the tops of skyscrapers lost in a mixture of smoke and fog. An extraordinary number of wildfires are burning in California, Oregon and Washington State, destroying hundreds of homes.

Lives lived: Forrest Fenn, an eccentric New Mexico art dealer who enticed thousands to search for hidden treasure after he announced in a 2010 book that he had stashed a chest filled with gold nuggets, diamonds and other jewels somewhere in the Rocky Mountains, died at 90 on Monday.

What we’re listening to: The ESPN podcast “Bloodlines.” Taffy Brodesser-Akner, a Times Magazine writer, says, “I lost the weekend listening to Wright Thompson’s excellent new podcast about the plague of horse deaths — 49 in just one year — at Santa Anita.”

Cook: This colorful tart loaded with zucchini and egg is easy, thanks to store-bought puff pastry. Top with whatever fresh herbs you have on hand, like parsley, tarragon or dill.

Read: Learn about the history of money in a fast-paced, chatty new book by Jacob Goldstein, the host of the NPR podcast “Planet Money.”

Listen: Songs by Ava Max, Tricky, Bill Callahan and SZA are on our pop critics’ playlist this week.

We have more diversions and recipes in our At Home collection.

As traffic picks up again on and below the streets, The Times asked experts for the best strategies to stay safe while traveling or commuting in the pandemic.

1. Choose your method wisely. Take into account how long you’ll be waiting for your chosen vessel to arrive and whether the station is inside or outside. If you’re riding the bus, try to sit near a window, and keep it open. Opt for the escalator or stairs over the elevator, if you can.

2. Avoid touching communal surfaces. Wash your hands before you leave the house and again upon reaching your destination. And use sanitizer frequently. Steer clear of poles and rails, whether on the ferry, the subway or the bus. Don’t touch the turnstile as you move through it; stay away from touch screens, keypads and elevator buttons. And make contactless payments if they’re offered. Paper tickets are also best avoided.

3. Follow any new directions. Take note of the decals on the floor and signs you may see shepherding you through the station, put in place to decrease crowding and reduce contact between passengers. Enter buses from the rear to avoid shedding respiratory droplets on the driver and other passengers. And if you’re driving onto a ferry, remain in your car for the duration of your trip.

4. Don’t eat onboard. Eating can carry particles from a surface to your face. Besides, you’d have to take off your mask. Avoid extensive conversations, too; talking sprays aerosolized droplets that can carry virus particles.

5. Be strategic about your timing. Try to avoid peak commuting hours. If your employer will allow for more flexible hours, you can circumvent, and not contribute to, the rush-hour crush.

Thanks again for starting your day with me. Until next time.

Thank you To Melissa Clark for the recipe, and to Theodore Kim and Jahaan Singh for the rest of the break from the news. You can reach the team at briefing@nytimes.com.

P.S.
• We’re listening to “The Daily.” Our latest episode is the first part of a series about what happened to Breonna Taylor, a young, Black medical worker killed in a police raid in Louisville, Ky.
• Here’s our Mini Crossword, and a clue: “Give or take” (five letters). You can find all our puzzles here.
• The word “violetear” appeared in The Times for the first time on Tuesday, according to the Twitter account @NYT_first_said.
• Our National editor Marc Lacey spoke to Katie Couric about covering multiple crises at once as a racial reckoning in newsrooms is underway.

Letters to the Editor: 'We saw off British 100 years ago – now we have to bare our teeth again'