We’re covering Britain’s first vaccinations against the coronavirus, the final hope for a Brexit deal and the busiest I.P.O. listing period in decades. 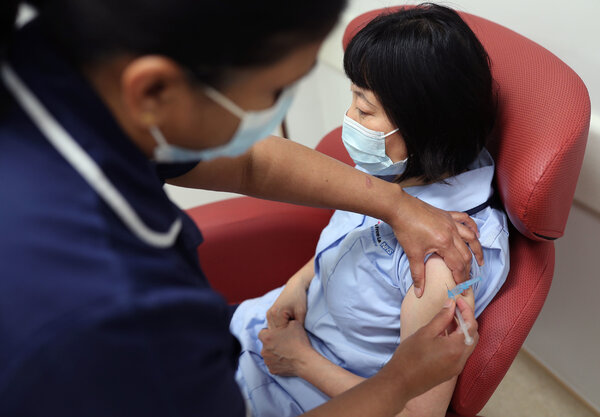 Health care workers, volunteers and the military in Britain will begin administering the Pfizer-BioNTech coronavirus vaccine on Tuesday morning, aiming to vaccinate more than 20 million people in a few months. Temporary clinics are expected to play critical roles as the mass vaccination program expands.

The National Health Service has taken on its biggest ever logistical challenge by vaccinating tens of millions of people against the coronavirus in a matter of months. At the same time, the law enforcement authorities are contending with an array of potential security threats to the vaccination campaign.

Reinforcements: Retired health workers are being asked to help, while the National Health Service is also recruiting tens of thousands of first-aid workers and others to help administer shots, as the vaccine becomes available to progressively more people.

Prime Minister Justin Trudeau of Canada announced that the country would get 249,000 doses of Pfizer’s vaccine this month, with millions more to follow in 2021.

Several countries across Europe are planning to loosen restrictions briefly over the holidays to allow families and friends to gather.

A lack of trust in the Kremlin is hobbling Russia’s vaccine rollout, which began over the weekend.

Du Weimin, the “king of vaccines,” is one of the richest men in China. His company is now the exclusive mainland manufacturer for the coronavirus vaccine made by AstraZeneca. But in China, the pharmaceutical industry is rife with corruption and controversy.

After Pfizer delivers its first 100 million vaccine doses to the U.S., the country may not get another batch until June, after the European Union bought up the supply offered to (and passed on by) the White House last summer.

The final push for a possible Brexit deal

With time running out in Brexit negotiations, Prime Minister Boris Johnson on Monday declared that he would travel to Brussels this week in a final effort to strike a trade agreement between Britain and the European Union.

Mr. Johnson’s announcement, after a 90-minute phone call with the president of the European Commission, Ursula von der Leyen, raised the stakes as the talks enter their endgame. After 11 months of grinding negotiations, a face-to-face meeting may be the last hope.

Key sticking points remain fishing rights, state aid and fair competition for industry — issues that have divided the two sides from the start.

Statement: “We agreed that the conditions for finalizing an agreement are not there,” Mr. Johnson and Ms. von der Leyen said, adding that they had asked their negotiators to “prepare an overview of the remaining differences to be discussed in a physical meeting in Brussels in the coming days.”

Opinion: Don’t blame working-class people for voting to leave the European Union, writes the comedian and actor Russell Brand. Blame the party that betrayed them.

Georgia’s secretary of state recertified the results of the state’s presidential race after another recount reaffirmed Joe Biden’s victory over President Trump, the third time that results showed that Mr. Trump had lost the state.

The move came less than 48 hours after Mr. Trump appeared in Georgia, at a rally at which he again claimed the election had been stolen from him because of fraudulent voting.

Mr. Trump’s rally was intended to support the candidacies of two Republican senators who are locked in high-stakes runoff races, which together will decide which party controls the Senate. To win, the Democratic challengers will need more than just disaffected Republicans seeking to give Mr. Trump one final defeat.

Related: A civil case being pursued by the attorney general for the District of Columbia argues that Mr. Trump’s inaugural committee illegally overpaid his family business by as much as $1.1 million for events at his hotel in Washington in January 2017.

If you have 6 minutes, this is worth it

‘This is insanity’: Investors rush in on start-up boom

When school, work and shopping moved online this year, demand skyrocketed for the tech that makes those interactions possible. Add in low interest rates and a surging stock market, and there is now a frenzy of deal-making, our tech reporter writes. This week, DoorDash and Airbnb plan to go public after the busiest I.P.O. listing period in two decades.

“I haven’t seen anything like this in over 20 years,” said Eric Paley, an investor at the venture firm Founder Collective. “The party is as loud and the drinks are flowing as freely as the dot-com boom, despite that we’re all drinking at home and alone.”

Police brutality: The police killing of an unarmed disabled Palestinian man in Jerusalem set off international outrage and fueled nationwide protests. But, as has long been the case, the authorities in Israel have failed to rein in the use of excessive force.

Soot: The Trump administration decided not to tighten controls on industrial soot emissions, despite research from government scientists that suggests that a slightly tighter level on these tiny, lung-damaging particles could save more than 10,000 American lives a year.

Bob Dylan: The Nobel-prizewinning singer-songwriter has sold his entire songwriting catalog of more than 600 songs to Universal Music, in what may be the biggest acquisition ever of a single act’s publishing rights, at an estimated cost of more than $300 million.

Snapshot: On Lake Victoria in Kenya, above, attracting baitfish with lanterns extends as far back as anyone can remember. But overfishing may jeopardize the tradition. With more than 400 boats fishing on any given night, competition has increased so much that at times violence has erupted on the lake.

Lives lived: The Russian art historian Irina Antonova, who over a half-century transformed the Pushkin State Museum of Fine Arts in Moscow and used it to take outside culture to isolated Soviet citizens, died last month at 98.

Bear hunt: Australia is starting its first koala count in years, deploying heat-seeking drones, acoustic surveys and detector dogs to find the marsupials in the wild.

What we’re reading: New York magazine’s tribute to favorite businesses that have closed during the pandemic. “This farewell to beloved establishments is a devastating sample of what the city has lost this year,” writes Melina Delkic, of the Briefings team.

Watch: Reached the limits of your streaming services? Go beyond the algorithm with our pick of the best offbeat films.

Listen: Take five minutes out of your day to fall in love with Beethoven, who was born 250 years ago this month.

At Home has our full collection of ideas on what to read, cook, watch, and do while staying safe at home.

Poetry to light up the gloom

Ahead of Thanksgiving last month, The Times’s National Desk asked U.S. state poets laureate for some words of gratitude in a relentlessly difficult year, with a 100-word limit. Felice Belman, an editor on the desk, explains what happened next for Times Insider, excerpted here.

The nation’s poets laureate have a real sense of mission. They aim to encourage an appreciation for poetry, to challenge us, to generate some buzz for the art form. That has required more effort and ingenuity during the coronavirus pandemic. And so, like firefighters waiting in a quiet station for the call to duty, they embraced the Times assignment quickly and wholeheartedly.

Pulling the project together was not without drama, though.

Some poets were tricky to track down. The writer from Vermont has no email address. But her friend, the poet laureate of Rhode Island, knew her phone number and sent her a text message to make sure she had received our query.

Other submissions got caught up in email spam filters. And the poet from Oregon, much like every never-satisfied reporter in the world, kept finessing his poem, even as our deadline crept closer. One poet worried she might have contracted the coronavirus, but she still managed to send a submission.

The result: On a day that also included otherwise alarming news, Times readers also got a large helping of poetry to make it all go down a bit more easily. Even in a post-pandemic world, this might be a terrific tradition to continue.

Thanks for starting your day with The Times.

Thank you
To Theodore Kim and Jahaan Singh for the break from the news. You can reach Natasha and the team at [email protected]

P.S.
• We’re listening to “The Daily.” Our latest episode is about one Republican election official condemning President Trump’s baseless fraud claims about the presidential election.
• Here’s our Mini Crossword, and a clue: Exhale wistfully (four letters). You can find all our puzzles here.
• The word “technopopulism” — from an Op-Ed essay about merging populism with technocratic expertise — appeared for the first time in The Times yesterday, as noted by the Twitter bot @NYT_first_said.
• Marc Lacey, The Times’s national editor, will be the new assistant managing editor for Live, where he will lead a team focused on briefings, blogs and chats.

Police discover student’s body in his room, 2 months after he died