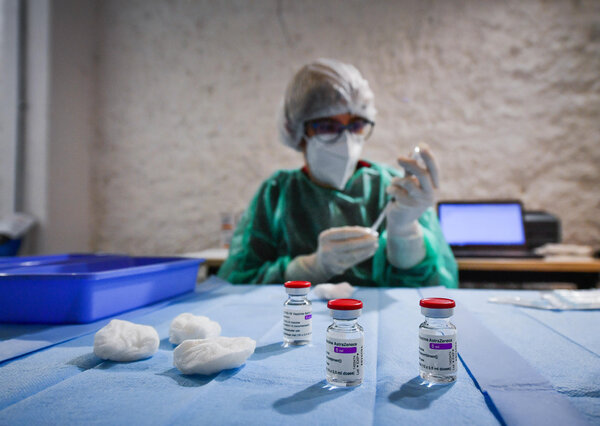 Germany, France and Italy became the latest countries to suspend use of AstraZeneca’s Covid-19 vaccine, citing reports of unusual blood clotting among a few people who recently received the shots in Norway.

Evidence that the vaccine causes clots seems thin at best. The World Health Organization continues to recommend the use of the vaccine. Even Europe’s main drug regulator says the benefits outweigh the risks. And Ann Taylor, AstraZeneca’s chief medical officer, said yesterday that the rate of clotting among vaccinated Europeans was lower than “would be expected among the general population.”

Thailand said it would resume distribution of the AstraZeneca vaccine on Tuesday, with Prime Minister Prayuth Chan-ocha among the first to receive it.

Third wave: Europe is facing a third wave of coronavirus infections, with France considering new restrictions. Hungary’s prime minister predicted hospitals this week would be at their most overwhelmed since the start of the pandemic.

Overcoming your fear: If an aversion to needles is keeping you from being vaccinated, experts suggest some ways to overcome it.

Policing in Britain under the spotlight

Prime Minister Boris Johnson of Britain met with law enforcement officials yesterday after the London police faced a firestorm of criticism for cracking down on a vigil on Saturday.

Officials are investigating police tactics at the event, which had been declared unlawful because of coronavirus restrictions. The vigil honored Sarah Everard, 33, whose killing touched off a national outcry over misogyny and violence. A Metropolitan Police officer has been charged in her death.

Many women have questioned why the police — who reportedly told residents in the South London neighborhood where Ms. Everard disappeared to stay inside for their own safety — were demanding sacrifices from women rather than forcing men to forsake violence.