Good morning. We’re covering the deepening global vaccine divide and a multination effort to punish China for its treatment of Uyghur Muslims. 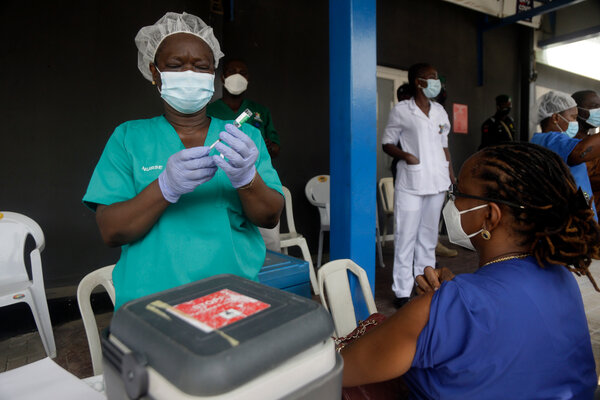 The vaccine gap is bad for the world

Of the Covid-19 vaccine doses given globally, roughly three-quarters have gone to only 10 countries. At least 30 countries have not yet injected a single person.

Many poorer nations could wait years for their shots, a delay that scientists warn could haunt all countries if the continued spread of the coronavirus allows it to mutate in ways that undermine vaccines.

Many countries were relying on the global vaccine program known as Covax, which was created around the idea that all would buy vaccines through a single mechanism, but dozens of wealthy nations went straight to pharmaceutical companies and elbowed the program out of the way.

The toll: Already, unvaccinated doctors and nurses have died this year in countries including Kenya, Mozambique, Nigeria and Zimbabwe, depleting health systems that can ill afford to lose any more workers.

Case study: Even in Kenya, one of Africa’s wealthier nations, the first vaccine shipment arrived only this month, later than anticipated and with only a quarter of the doses promised. No one knows when the next batch will arrive. In the best-case scenario, Kenya is expecting to vaccinate only 30 percent of its people, or about 16 million out of almost 50 million, by the middle of 2023.

A U.S. trial of AstraZeneca’s vaccine found that it provided strong protection with no serious side effects. The company will seek approval from drug regulators, but the U.S. may not need the shot.

Taiwan, one of the few places in the world to successfully contain the coronavirus from the beginning of the pandemic, kicked off its vaccination drive on Monday.

President Vladimir Putin was set to receive one of Russia’s Covid-19 vaccines on Tuesday, ending an unexplained delay in getting inoculated.

China hit by sanctions over Xinjiang

Britain, Canada, the U.S. and the European Union imposed penalties on Chinese officials on Monday over human rights abuses of Uyghur Muslims and other ethnic minorities in Xinjiang.

The moves come days after a heated encounter in Alaska between U.S. and Chinese senior officials, and is likely to increase tensions between the nations and Beijing. Australia is debating a motion that would call for a U.N. inquiry and for its government to ensure that the country does not profit from forced labor in Xinjiang.

The U.S. froze the assets of two Xinjiang officials and called for the release of those held in forced labor camps in the region. U.S. Secretary of State Antony Blinken said China’s leadership “continues to commit genocide and crimes against humanity in Xinjiang.”

The E.U. targeted four officials in Xinjiang, imposing its first significant sanctions on China in more than three decades.

Backlash: Beijing retaliated immediately, blacklisting 10 European officials who work on the bloc’s policy toward China. The Chinese government denies allegations of abuse and claims the camps are needed to fight extremism.

On the ground: Exiled Uyghur families described being separated from their children, some as young as 5 years old, who are forced to stay in state orphanages, according to a recent Amnesty International report.

Israelis are voting on Tuesday in their fourth election in just two years. Many of them feel numbed by their endless election cycle — a mood that contrasts with the Palestinians, who are excited about a rare chance to vote, in elections in May.

The Israeli vote is the embodiment of political paralysis caused in part by Prime Minister Benjamin Netanyahu’s efforts to remain in office while on trial for corruption. Mr. Netanyahu hopes the country’s successful Covid-19 vaccination campaign will help him win. But polls suggest that the outcome is unlikely to break the deadlock. Many Israelis are bracing for a fifth election later this year.

The Palestinian vote, set for May 22, will be the first since a violent rift in 2007 between Hamas, the faction that controls the Gaza Strip, and its rival, Fatah. More than 93 percent of Palestinians have registered to vote, illustrating an initial enthusiasm for the process. Young people want a clearer path to statehood and a more competent government.

Geopolitics: Mr. Netanyahu’s plans to visit the United Arab Emirates and his bombast about Emirati investments have turned into a diplomatic debacle. Emirati officials sent clear signals that the Persian Gulf country would not be drawn into Mr. Netanyahu’s re-election campaign.

Australia has been hit by record-breaking flooding — a once-in-50-years event, or possibly 100 years, depending on the rain that’s expected to continue through Tuesday night. More than 20,000 people have been evacuated.

Tokyo prosecutors on Monday charged two Americans with helping Carlos Ghosn, the former Nissan chief, jump bail in Tokyo, where he was awaiting trial on four counts of financial wrongdoing.

A Beijing court on Monday tried Michael Kovrig, a former Canadian diplomat who was detained in late 2018, right after Canada arrested a top Huawei executive. The proceedings were held in secret.

Model trains are the latest industry getting a pandemic-spurred boost from people seeking new hobbies. With sales rising, Märklin, a 162-year-old German company, is hiring new apprentices to learn the precise art of making miniature trains. (Take a virtual tour of the factory here.)

“Outside, there is total chaos,” one enthusiast said. “But inside, around my little train set, it is quiet, it is picturesque.”

Trauma and the pandemic

Covid has traumatized the U.S. Dr. Diane Meier, the director of the Center to Advance Palliative Care in New York, discussed what is needed to heal with our Talk columnist. Here’s an excerpt.

Has the pandemic affected our collective attitude toward grief?

There are many shadow pandemics. One is the trauma to the entire health profession during this last year. The other trauma is the roughly 10 people for every person who has died from Covid who are grieving. That’s over five million people. That is a shadow pandemic that will be with us long after we get the virus under control. Our current president has worked hard to begin to address that through the ritual ceremonies to remember the dead and honor them, and he has talked a lot about his own losses, to normalize talking about losses and how they’re with you every day. That’s important. We need other people to do it, too.

Can you tease out the link you suggested earlier between trauma and killing the other?

The analogy is post-traumatic stress disorder: an overreaction to new traumas because the prior traumas were never addressed, never expressed, never worked through. So everything that happens re-triggers it. There’s a book called “The Body Keeps the Score,” and that’s what it’s about: Things that happened to you years ago don’t ever go away. They are embedded in your mind and body and inform how you react to things that happen today.

This spinach soup with tahini and lemon is bright and complex.

If you like the farce and brotherly conflicts of “Frasier,” you might like the funny, lovely British comedy “Back,” which crams more jokes and details into its episodes than some shows manage in a season.

Where to Go (Virtually)

Nintendo’s theme park opened in Japan last week. Take a look at the “gleefully surreal” park in The Verge.

P.S. The Travel reporter Tariro Mzezewa joined MSNBC to talk about the future of travel.

The latest episode of “The Daily” is on the cruel reality of long-haul Covid-19.