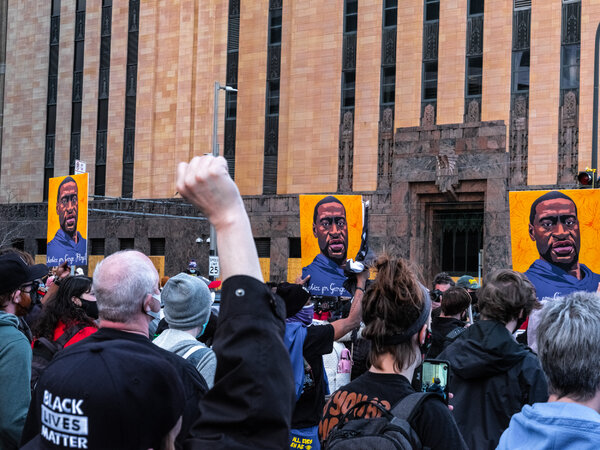 The trial over the death of George Floyd begins

Ten months after the death of George Floyd in Minneapolis set off protests across the U.S. and then the world, the first day of the murder trial of Derek Chauvin, the former police officer accused of killing him, attracted global interest. Here’s what happened:

The prosecuting attorney aimed to focus the jurors’ attention on the famous bystander video of Mr. Floyd’s arrest and death. “You can believe your eyes, that it’s homicide — it’s murder,” the prosecutor, Jerry Blackwell, said, adding that the trial was “about Derek Chauvin,” not the police in general.

The defense for Mr. Chauvin said it would ask jurors to consider more than 50,000 items in evidence outside of the video itself. Eric Nelson, Mr. Chauvin’s lawyer, told jurors that the case “is clearly more than about 9 minutes and 29 seconds.”

Mr. Floyd’s exact cause of death will prove to be one of the most crucial points of this trial.

Outside the courthouse, protesters gathered and a helicopter whirled overhead.

President Biden is preparing the details of a new, vastly larger economic stimulus plan that would use trillions in government spending to unite the goals of fighting climate change and restoring the economy, with an emphasis on renewable power, energy efficiency and electric car production.

But experts note that throwing money at climate change is not a particularly effective way to lower emissions of planet-warming pollution, and it may present a significant risk to taxpayers.

Still, if the stimulus “sets up the energy economy in a way that it’s eventually cheaper to reduce emissions, it could create more political support for doing that down the road” by making legislation or regulations less painful, said David Popp, the lead author of a National Bureau of Economics study on the green stimulus money.

Related: The Biden administration announced a plan to vastly expand the use of offshore wind power along the East Coast, aiming to tap a potentially huge new source of renewable energy that has struggled to gain a foothold in the U.S.

Results of the W.H.O. inquiry in Wuhan

The 124-page report of a joint inquiry by the World Health Organization and China says that China still does not have the data or research to indicate how or when the coronavirus that has killed nearly 2.8 million people worldwide began spreading. The report is also not clear on whether China will permit outside experts to keep digging.

The report, compiled after investigators spent 27 days in Wuhan, China, contains a glut of new detail but no profound new insights. It does little to allay Western concerns about the role of the Chinese Communist Party, which is notoriously resistant to outside scrutiny and has at times sought to hinder any investigation by the W.H.O.

The expert team also described the possibility that the virus emerged accidentally from a Chinese laboratory as “extremely unlikely,” even though some scientists say that is an important question to explore. The prevailing theory remains that the virus originated in bats, jumped to another animal and then mutated in a way that enabled it to transmit to humans, and from human to human.

Analysis: “The investigation runs the risk of going nowhere, and we may never find the true origins of the virus,” said Yanzhong Huang, senior fellow for global health at the Council on Foreign Relations.

Johnson & Johnson said it would supply its one-shot vaccine to African Union member states, as the continent experiences a slow vaccine rollout, an uptick in cases and worries about new mutations.

Vaccines made by Moderna and Pfizer-BioNTech are proving highly effective at preventing symptomatic and asymptomatic infections under real-world conditions, federal health researchers reported.

The government in Britain moved on Monday to relax its strict national lockdown, allowing people to gather outdoors in groups of up to six people. More than 30 million in Britain, or 57 percent of the adult population, have received a first dose of a vaccine.

President Biden called on governors and mayors to maintain or reinstate mask-wearing orders. The nation has “so much reason for hope,” the C.D.C. director, Dr. Rochelle Walensky, said. “But right now I’m scared.”

Aided by the moon and the tides, the giant container ship stuck in the Suez Canal, above, was wrenched from the shoreline on Monday, six days after blocking the vital trade route.

Ghislaine Maxwell, the longtime associate of Jeffrey Epstein, was charged on Monday with sex trafficking of a minor, as federal prosecutors accused her of grooming a 14-year-old girl to engage in sexual acts with Mr. Epstein and later paying her.

Even as President Biden seeks to forge an “alliance of democracies,” China wants to make clear that it has alliances of its own, in an attempt to position itself as the main challenger to an international order led by the U.S.

With the pandemic prompting a surge in working from home and a slump in train travel, opponents of HS2, Britain’s more than $140 billion high-speed rail line, believe the argument is finally tilting their way.

Billions of cicadas, part of a group called Brood X, which emerges from below ground every 17 years, are expected to appear in 18 U.S. states in the next few weeks.

In the Indian state of Assam, a group of women known as the Hargila Army is leading a conservation effort to rescue the endangered greater adjutant stork, an outlandish-looking animal with piercing blue eyes and an elongated electric-yellow neck.

The group is trying to change perceptions of the birds as pests, by, for instance, weaving motifs of the storks into traditional textiles. The work is helping the women, too. Many receive tools and training enabling them to earn extra income.

Europe’s biggest concert in a year

Barcelona on Saturday played host to Europe’s biggest indoor rock concert since the start of the pandemic, with 5,000 tickets sold.

A hospital team had helped test the concertgoers for Covid-19 before the event, using as their model a smaller concert last December in another Barcelona venue, the Sala Apolo. (Six people tested positive ahead of Saturday’s concert.)

The concert was “a small but important step toward normality,” said Ventura Barba, one of the organizers. But within the Palau de Sant Jordi, which ordinarily holds 17,000 people, some coronavirus restrictions remained in place: Ticket holders were not allowed into the stands and instead were kept divided within three areas of the dance floor, while having to wear FFP2 masks (the European standard) provided by the organizers.

Organized by a group of Spanish music promoters as part of an initiative called Festivals for Safe Culture, the concert was presented as Europe’s boldest effort to get thousands into an indoor site, without seating or mandatory social distancing. The sole act was Love of Lesbian, a Spanish indie rock band.

“For me, this isn’t about whether I really like their music, but about being able to feel and live their music, right next to so many other people,” one attendee said.

These spinach fritters come together in a flash. Consider putting down your phone and eating them at the table, as a way to unwind alone or connect with loved ones.

Trying to entertain bored children in lockdown? Our tips go beyond puzzles and banana bread.

Here’s today’s Mini Crossword, and a clue: Leans to one side (five letters).

That’s it for today’s briefing. See you next time. — Natasha

P.S. Farah Fleurima will be joining The Times as a staff editor in the Seoul newsroom.

The latest episode of “The Daily” is on the trial of Derek Chauvin.

Colette Browne: 'If British people don't fear no deal, it's because their newspapers have force-fed them only Brexit Kool-Aid'