We’re covering the elusiveness of herd immunity in the U.S., and Benjamin Netanyahu’s last-ditch effort to form a new government in Israel. 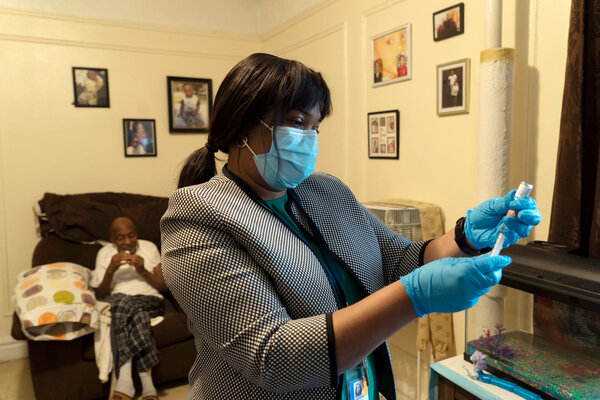 There is growing consensus among scientists and public health experts that the notion of herd immunity in the U.S. — a threshold calculated to be at least 80 percent of the population being protected against the coronavirus — may not be reachable in the foreseeable future, and perhaps not ever.

Instead, scientists are coming to the conclusion that the virus will most likely become a smaller, more manageable threat that will continue to circulate for years. How much smaller depends on how much of the nation, and the world, becomes vaccinated, and how the virus evolves.

“It’s just really a shift in thinking, but it doesn’t mean that we should despair,” Apoorva Mandavilli, who reported on the new focus, told our Coronavirus Briefing newsletter.

Path forward: Vaccinations, especially for people at highest risk, will be key to limiting the severity of outbreaks. Over a generation or two, the goal is for the virus to become more like common colds.

The severe oxygen shortage in India is getting worse, and hospital officials are desperate for help. The New Delhi High Court stepped in on Sunday, saying it would punish government officials for failing to deliver oxygen.

Australia barred its citizens from traveling home from India, saying they could face $50,000 fines and jail time.

Russia’s vaccine effort is lagging, AP reports. As of mid-April, about 8 percent of Moscow residents had received at least one shot. Nationwide, 5 percent of Russians are fully vaccinated.

Clubbing returned to Britain this weekend, with 3,000 unmasked people packed in a Liverpool warehouse, part of a government research experiment to see how reopening might work. Negative virus tests were required for entry.

Prime Minister Benjamin Netanyahu of Israel said on Monday that he would be willing to hand over leadership for one year to a longtime right-wing rival, Naftali Bennett, in a last-ditch effort to cobble together a new government.

Netanyahu, who has spent the past 12 years in office and is now standing trial on corruption charges, announced the offer on Facebook just ahead of a deadline to form a government, in the wake of Israel’s fourth inconclusive election in two years.

The March election left Netanyahu unable to muster a coalition with a majority, and even with Bennett’s small, pro-settlement party, Netanyahu would be two seats short of a majority government. According to Netanyahu, Bennett made the offer. “It’s not exactly a routine demand from the person who heads a party with seven seats,” Netanyahu said.

Response: “I have just heard Netanyahu’s proposal, and I have to say it is unclear to me,” Bennett said. “I did not demand the premiership from Netanyahu, but rather I asked for a government. And that, to my regret, he does not have.”

Context: Offering this deal to “an old and bitter rival” is surprising, our Jerusalem bureau chief, Isabel Kershner, told me. “It’s definitely a sign of desperation. But again, a lot of people doubt his sincerity — and Bennett is apparently among them.”

The Biden administration is moving quickly to limit hydrofluorocarbons, chemicals used in air-conditioning and refrigeration, by 85 percent over the next 15 years.

It’s the first significant step taken by the Environmental Protection Agency under the new administration to curb climate change. Hydrofluorocarbons are thousands of times more potent than carbon dioxide at warming the planet.

The agency’s goal is shared by environmental groups and the business community, which jointly championed bipartisan legislation passed by Congress in December.

Impact: The E.P.A. estimates that, from 2022 to 2050, the rule will eliminate the equivalent of 4.7 billion metric tons of carbon dioxide, or about three years’ worth of emissions from America’s power sector.

Our reporters chronicled Day 1 of the U.S. troop withdrawal from Afghanistan. The scenes over the weekend were almost as if a trillion-dollar effort had morphed into a garage sale.

Teodoro Locsin Jr., the Philippine foreign minister, tweeted an expletive-filled tirade on Sunday demanding that Beijing pull its ships out of Manila’s waters in the South China Sea.

A leading Olympic swimmer from Myanmar called for an international boycott of his country’s Olympic committee, branding it a “puppet” of the military junta.

German authorities said they had arrested three people and dismantled a dark web child pornography site, described by prosecutors as one of the biggest in the world, with approximately 400,000 members.

President Biden’s plan to slow gun violence in the U.S. hinges on the effectiveness of the Bureau of Alcohol, Tobacco, Firearms and Explosives, the agency tasked with enforcing gun laws. But it’s been hamstrung by the firearms lobby for decades, a conflict that began a half-century ago with a naked man holding an antique revolver.

A new vision of office life

As it plans a return to office, Google is reimagining the workplace and trying to give employees flexibility. Other companies may follow its lead. Dai Wakabayashi spoke to our OnTech newsletter about the future of workplaces.

What did Google discover after more than a year of mostly remote work?

Google was surprised at how productive the work force was. Some employees weren’t willing to go back to an office full time. One downside that Google executives talked about is missing some creativity and collaboration, and a difficulty in establishing workplace culture and trust, when people weren’t together in person.

But even before the pandemic, Google had started to believe that its current office work environment was broken.

Broken in what way?

Part of the problem is that Google’s work force has grown so quickly and the company was packing people into offices. Some employees said that they had trouble focusing in the office because there were too many people and distractions. And some of Google’s office complexes were so sprawling that it took people a long time to travel from one building to another.

What is Google trying to do differently now?

It wants to provide more safety or the feeling of safety by staggering how frequently people come to the office. The company wants to be more flexible to people’s changing needs, and is experimenting with personal heating and cooling systems at desks and camp-themed outdoor meeting spaces.

Beet and lentil salad with Cheddar is a party of sweet, earthy and salty flavors.

These horror movies offer scares from around the world, including an Indonesian witch and an Irish vampire.

Here’s how to make a greeting card with newspaper, a glue stick, a piece of cardstock and tape.

The latest episode of “The Daily” is on the world of internet complaint and gossip sites.

Jason O'Mahony: 'Ireland should enter space to live race – by moving capital from Dublin to Athlone'